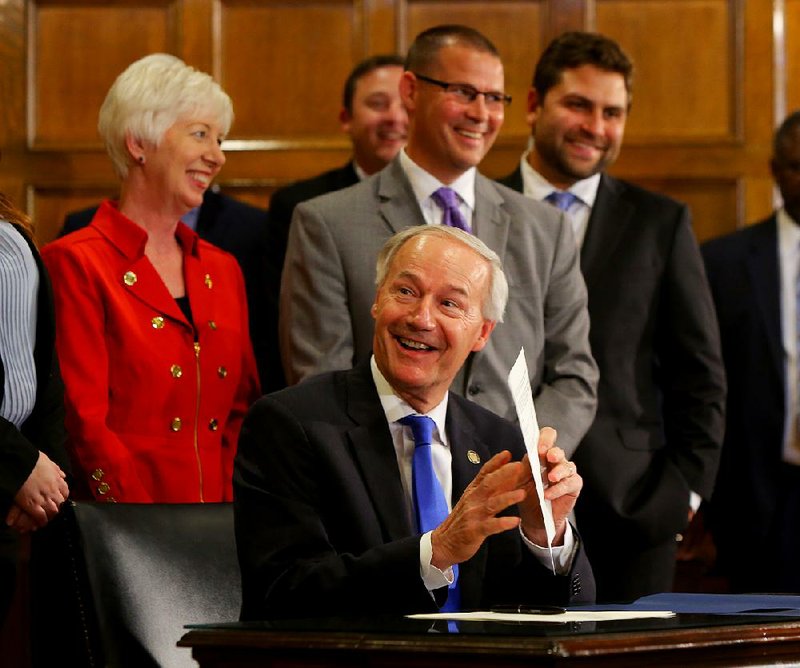 Gov. Asa Hutchinson (seated) prepares to sign a pledge Friday between the Arkansas Health Care Association and the state Department of Human Services to work out a plan to cut the state’s costs for nursing home care by $250 million over five years.

Gov. Asa Hutchinson and nursing home industry representatives signed a pledge Friday to save the state's Medicaid program $250 million over five years by curbing the growth of spending on care for the elderly and physically disabled.

In a memorandum of understanding with the state, the Arkansas Health Care Association, which represents nursing homes, agreed to hire consultants to help develop a plan to save money while improving home-based services for the elderly and nursing home care.

Hutchinson said the plan includes capping the number of nursing home beds in the state at their current level for 10 years, even though the number of elderly Arkansans needing supportive services is expected to grow by 25 percent over that period.

"It will be a re-balancing of the services we provide," Hutchinson said at a news conference at the state Capitol. "We will be keeping more people in their homes and in their communities rather than simply putting them into nursing homes."

Cindy Gillespie, director of the Department of Human Services, said the issue is "near and dear to everyone's heart," because they have parents who will need long-term care or will need it themselves.

"We all want to to make sure that in Arkansas we have in place the structure that allows us to have people remain in their homes and community as long as they can" and receive good care in a nursing home when they need it, she said.

The plan is part of an effort by Hutchinson to reduce the growth in spending in the traditional Medicaid program by $835 million over five years, in part to help pay for the coverage of low-income, nondisabled adults under the expanded Medicaid program.

Hutchinson has said he supports achieving savings by hiring managed care companies to handle Medicaid benefits for the developmentally disabled and mentally ill while continuing to pay providers directly for services for nursing home residents and other Medicaid recipients.

Under draft legislation supported by Hutchinson, the state would have been prohibited from hiring managed care companies to provide nursing home benefits as long as changes proposed by the nursing home industry resulted in at least $50 million a year in savings for the Medicaid program for two years between Jan. 1, 2017, and Dec. 31, 2019.

Hutchinson had hoped for the legislation to be proposed during a special session in April, but he agreed to leave it off the session's agenda at the request of House Speaker Jeremy Gillam and Senate President pro tempore Jonathan Dismang, who said lawmakers needed more time to consider the proposal.

The April session focused solely on legislation that authorized the state to continue the expanded Medicaid program while making changes that Hutchinson said would encourage enrollees to stay employed and take responsibility for their health care. Legislators approved that measure.

Although the agreement signed Friday does not mention managed care, Hutchinson said he's confident the goals will be met.

"We actually believe we can achieve greater savings" than the $250 million target, he said.

Herb Sanderson, director of the Arkansas chapter of the AARP, said in a statement that his group is "encouraged that the Governor and others are making a commitment to help older Arkansans live with independence in their homes and communities with the care they want and need for as long as they are able."

An estimated 452,000 Arkansans provide care at no charge to a spouse or other loved one, he said.

It's important that the process for developing the nursing home plan is "transparent and that consumers, families and caregivers have a voice," he added.

In addition to a moratorium on nursing home beds, the plan will involve providing "preventative" home and community-based services to Medicaid recipients with less severe needs than those who currently qualify for the benefits.

The plan will also involve using a more objective, computer-based system for nursing home staff to assess patients' needs and for the assessments to be audited by an outside entity.

The Medicaid program will also base a percentage of payments to nursing homes on their performance on a set of quality measures, said Rachel Davis, director of the Arkansas Health Care Association.

In addition, the program will reduce certain payments to nursing homes, she said. For instance, Medicaid will no longer pay a temporary, enhanced rate to a nursing home when a new owner takes it over, she said.

The changes will require approval by the state Legislative Council and in some cases by officials with the U.S. Centers for Medicare and Medicaid Services.

Davis said the savings will likely be measured during a five-year period that will start July 1, 2017.

She and Human Services Department officials said they don't yet know how much of the savings would go to the state. The state pays 30 percent of the cost for many Medicaid services, with the federal government paying the rest.

Nursing homes, however, pay a tax that provides 42 percent of the state's share of the cost of nursing home care, said Mark Story, chief financial officer for the state Medicaid program. That makes the state responsible for about 17 percent of the overall cost.

The Stephen Group, a Manchester, N.H., consulting firm hired by a legislative task force last year, said in an October report that Arkansas spent $1.2 billion in 2014 on care for the elderly and physically disabled, with about $700 million going to nursing homes.

The consultant estimated that the state could save $504 million from 2017 through 2021 by "re-balancing" the state's spending away from nursing homes and toward home-based care.