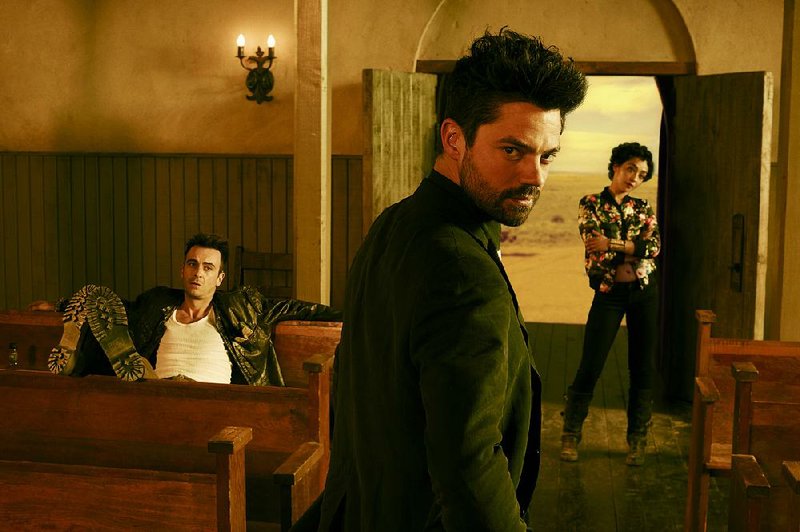 And now for something completely different.

Preacher debuts at 9 p.m. today on AMC following the midseason finale of Fear the Walking Dead, and continues the channel's string of fascinating, avant-garde adult dramas.

By adult dramas, I mean thoughtful, smart, hard-edged programs that have become standard at AMC -- programs such as Mad Men, Breaking Bad, its prequel Better Call Saul, The Night Manager, Halt and Catch Fire and The Killing. Also worth a look is the forthcoming restaurant drama starring David Schwimmer, Feed the Beast (9 p.m. June 5).

It simply doesn't get much better than all that for a discerning audience.

It remains to be seen whether Preacher will reach those lofty heights, but I found the pilot intriguing enough to immediately add it to my DVR schedule.

The series, which will have 10 episodes in its first season, is based on the 1990s comic book franchise of the same name and labeled by AMC as "a supernatural, twisted and darkly comedic drama."

Don't be misled by the comic undertones. The series also has the occasional burst of graphic violence. I mean, we see people explode, but in a funny way.

The "genre-jumping epic" follows a preacher and former criminal named Jesse Custer (Dominic Cooper) who has returned to his small West Texas hometown of Annville to lead his dead father's old church.

But then Jesse becomes inhabited by an unearthly entity (think a higher power) that causes him to develop an unusual ability. That turns his life to a new kind of mission.

The trio inhabit "a crazy world populated by a cast of characters from heaven, hell and everywhere in between."

Not so straightforward anymore.

How crazy is this West Texas universe? Viewers may want to record the pilot and watch it twice. The exposition comes quickly and subtly and the settings shift frequently, beginning with the opening sequence that's labeled "Outer Space" and shows a flashing cometlike object hurtling through the solar system and on to Earth.

As with most AMC projects, the cinematography is a visual treat. Preacher, like Breaking Bad, was shot in Albuquerque, N.M., and the desolate, khaki vistas are an integral part of the series.

• Billboard Awards. Time once again for music lovers to get their groove on. The 2016 Billboard Music Awards air at 7 p.m. today on ABC. The production will be presented live from T-Mobile Arena in Las Vegas, co-hosted by Ludacris and Ciara.

In case you're out of the loop, the mononymous duo are rapper/actor Christopher Brian Bridges and singer/songwriter/producer/dancer/actress/model Ciara Princess Harris.

As with similar awards events, the Billboard Music Awards is primarily an excuse to kill an evening of prime-time TV and cram as many musical artists and acts into three hours as possible.

It's not the trophies (they look kind of cheap), but the music we come for. Performing during tonight's ceremony will be Rihanna (Robyn Rihanna Fenty), Ariana Grande, Blake Shelton and his current main squeeze, Gwen Stefani.

They'll also hand out awards tonight, but explaining how someone wins is complicated. It has to do with rankings taken from a variety of sources.