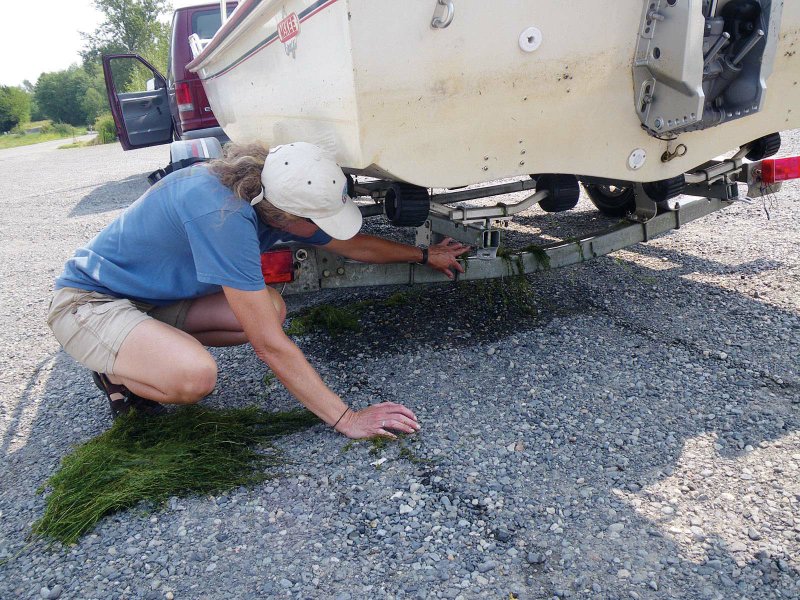 Always properly clean, drain and dry your boat to protect it — and Arkansas’ ecosystems — from invasive species.

Across the nation, invasive species are threatening aquatic habitats. Many lakes, rivers, ponds and streams are threatened by species such as Asian carp, zebra and quagga mussels, sea lampreys, hydrilla and spiny water fleas. These invasives can devastate ecosystems and damage equipment.

One way anglers with boats can help is participating in the Clean Drain Dry Initiative to reduce the risk of transporting plants, animals and diseases. We may not be able to eradicate species once they are introduced, but we can work together to stop them from spreading into new areas. The concept is really quite simple.

CLEAN your boat, trailer, motor, waders and anything else that gets wet while boating or fishing. Remove visible aquatic plants, mussels, other animals and mud before leaving the body of water you’re visiting. Then go to a commercial car wash and use a high-pressure washer to help blast off anything that might be clinging to gear. If you have been boating in a part of the country with zebra or quagga mussels, you should have your watercraft cleaned with hot water to make sure all mussels are not only off, but dead.

DRAIN all water from your boat, bilge, motor and livewell by removing the drain plugs and opening all water-draining devices away from the boat ramp. Regulations require this when leaving accesses in many states and provinces.

DRY everything at least five days before going to other waters, or spray/rinse recreation equipment with high pressure and hot water (120 degrees or higher).

More than 2,500 partners across the nation, including the Arkansas Game and Fish Commission, have teamed up to spread the word about the importance of the Clean Drain Dry Initiative to stop the spread of invasive species. Here in The Natural State, for example, boaters are being reminded that their actions are critical to help stem the spread of invasive zebra mussels. Boaters who clean, drain and dry their boats, trailers and gear before traveling from one Arkansas waterway to another are still key to containing costly problems caused by these tiny mollusks.

An incident earlier this year exemplifies the importance of being watchful for these shelled creatures. Alert workers at a marina and boat transport service contacted Arkansas Game and Fish biologists, who were able to intercept a vessel carrying hundreds of invasive zebra mussels before it could be launched in Norfork Lake.

Jeremy Risley, district fisheries supervisor for the AGFC, said the boat had been housed in a marina slip at Bull Shoals, which has been infested with zebra mussels since 2007.

“The owner of the boat had just purchased it and had contracted the marina to move it to Norfork,” Risley said. “When the men who worked for the marina saw what they thought were zebra mussels on the boat, they called us to come out and inspect it.”

Upon inspection, the boat had many adult zebra mussels attached to its hull, motor and in its bilge area. Some of the mussels were as large as 2 inches. All zebra mussels were removed from the boat, and the vessel required power washing and a 30-day drying period and final inspection before it could be launched into Norfork Lake.

Zebra mussels were found in Lake Dardanelle in 1992 and can now be found in the Mississippi River, the White River, the lower St. Francis River, Bull Shoals and Plum Bayou in Arkansas. To date, there have been no confirmed sightings of zebra mussels in Norfork Lake, Table Rock Lake or Beaver Lake, but the zebra mussels in Bull Shoals Lake saw a large population increase in 2014 and 2015. One adult female can produce between 10,000 and 50,000 larvae (called veligers) each time it spawns, and the species can spawn up to five times per year.

It is still unclear how zebra-mussel infestations will affect the overall health of the fishery, but they can cause native mussel populations to decline and cause serious damage to water-intake pipes and other equipment left in the water. A report by the U.S. Department of State in 2009 estimated the total cost of the zebra-mussel infestation in the United States from 2010 to 2020 at $3.1 billion.

“I really want to say thank you to the men who spotted the zebra mussels and called them in,” Risley said. “Anytime you see something like this that doesn’t look right, it’s always best to ask for help to make sure you’re doing the right thing.”

Invasive plants can cause problems, too, including two already found in some Arkansas waters. Water hyacinth is a floating plant from South America that spreads and can cover the surface of a pond or lake, choking out native plants and causing fish kills. Millions of dollars are spent each year removing the thick mats. Didymo, or rock snot, produces thick mats that can cover a streambed and choke aquatic life underneath. It’s very slippery, which makes fly-fishing and other recreation difficult. There are no methods getting rid of didymo once it’s been introduced, but the spread of didymo and water hyacinth can be prevented by avoiding their transport on boats, trailers, fishing tackle, waders and other items that might bring them from infested areas. Clean, drain and dry your equipment every time you go fishing or boating so you’re not contributing to the problems.

Some Asian fish such as silver and bighead carp have had devastating impacts on Arkansas’ aquatic ecosystems, too. These exotics found in the Arkansas and Mississippi rivers are voracious feeders that grow to 60 pounds and compete for food with native fish. When startled, they leap from the water. Jumping fish have injured boaters, anglers and skiers. They also damage fishermen’s nets. Biologists have said anglers can help prevent the spread of these fish by not transporting bait between bodies of water.

In the 2016 Arkansas Fishing Guidebook, available at license dealers statewide, the Arkansas Game and Fish Commission emphasizes these tips for stopping the spread of aquatic invasive species.

between fishing trips with hot soapy water, a high-pressure washer or a light bleach solution (1 cup bleach to 10 gallons water).

• Let boats, trailers and other equipment fully dry for 4 to 6 hours, preferably in the sun.

• Never move live fish or fish parts from one body of water to another.

• Only use wild-caught bait in the body of water where it was collected.

• Do not release live bait into any water body.

• Report unusual numbers of dead or dying fish to the AGFC Fisheries Division as soon as possible.

• Tell other anglers and boaters about prevention and spread of fish diseases and other organisms. Aquarium hobbyists and water gardeners should purchase native species instead of nonnatives.

For more information on ways you can help stop the spread of invasive species, visit www.cleandraindry.org.