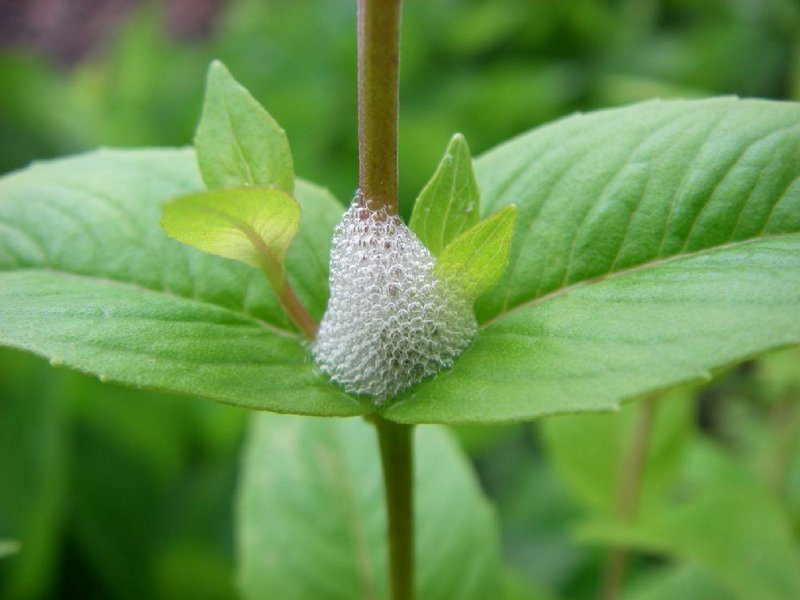 A spittlebug nymph hides inside its pile of bubbles May 18 among saw-toothed mountain mint in the Carl Hunter “meadow garden” at Pinnacle Mountain State Park.

Nothing perks up a dreary workday like slipping out of the office for a quick dose of nature, especially when nature's bubbling over with wildflowers. 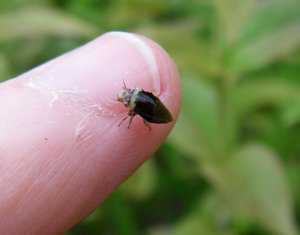 Photo by Celia Storey
Not quite an adult and so still flightless, this spittlebug instar scurried onto the photographer’s fingers after its bubbles were teased away; it had to be coaxed back onto the plant. 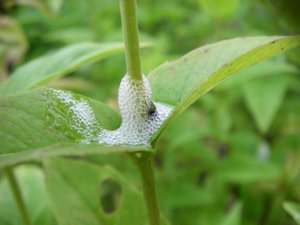 Photo by Celia Storey
As some of its protective cloud of bubbles is teased away, a formerly invisible spittlebug begins trying to escape.

Tuesday in Pinnacle Mountain State Park, midmorning sunlight slanted through the Pulaski County Master Gardeners' Carl Hunter "meadow garden," turning yellow sundrops into glories. Most of the garden's thriving stands of wild species were busy being green, but here and there in the V's where leaf petioles met stems, white blobs glistened.

Pretty blobs. And pretty odd. Were they spider webs? No, too wet. More like suds or ... could it be spit?

These blobs clung to the round stems of the lance-leaved coreopsis and the square stems of the saw-toothed mountain mint. Closer inspection brought teeny tiny bubbles into focus.

Then he ducked into a shelf-lined room stacked with odds and ends from interpretive projects, accordioned his legs into a very low chair and poked a computer keyboard to bring up Wikipedia. "It's not a very good source," he apologized, "but spittlebug or froghopper, that's what makes that stuff."

Inside each pile of bubbles, Spilman said, at least one nymph -- an immature spittlebug -- sat quietly feeding on the plant's sugary sap, exuding mucilaginous bubble-stuff out its behind and frothing it by blowing air through abdominal openings.

"The first time I saw this foam substance on a plant, I thought the plant had created it," said Steve Creek, a wildlife photographer in Lavaca who noticed white foam this spring on plants in his area of the Ouachita Mountains. Looking it up on the internet, he read there are many species of spittlebugs, which also are called froghoppers because the adults are prodigious leapers -- for their size, better at leaping than fleas.

Inspired, he blogged: "The foam hides the nymph from the view of predators and parasites, it insulates against heat and cold, thus providing thermal control and also moisture control; without the froth the insect would quickly dry up."

The bubbles are sticky and taste bad, otherwise ants and birds might gobble up the nymphs, and parasitic wasps can't penetrate them to inject their eggs into the nymphs' soft bodies.

"I read that the spittlebug nymphs do feed on plant sap, but that they cause minimal damage," Creek told the Arkansas Democrat-Gazette.

That's the case when a few insects set up shop in a stand of thriving wildflowers or among the vast population of trees in a forest, said John Hopkins, an associate professor and Cooperative Extension Service entomologist for the University of Arkansas Division of Agriculture at Little Rock. But for turf-grass farmers, the little suckers are a problem, especially one sort -- the two-lined spittlebug.

Homeowners whose lawns are centipede, zoysia or bermuda grass most likely have seen these guys, too.

"It's a dark-colored little insect in the adult form, maybe a little over a quarter inch in length. It's got red legs and red eyes, and it's got two parallel orange stripes on the wing covers. Once you've seen one you'll know it forever," he said.

In temperate climates, for instance ours, spittlebugs manage two generations a year. Only the nymphs make bubbles; the adults hop or fly about, pausing before they die to attack plants, mate and lay eggs.

The immature insects currently wiggling in their piles of foam hatched from eggs laid by 2015's second generation of spittle-kind, probably in late September.

The fall batch of eggs, typically left among thatch at the bases of grassy plants, hatches in late April or early May, and nymphs emerge. Unlike butterflies, which undergo a complete metamorphosis, spittlebugs grow through a series of instars, increasingly large and decreasingly translucent miniatures of the adults they eventually become.

So April's spittle hides June or July's mating adults, whose eggs hatch relatively quickly in the summer heat and set about the bubbling, sucking instar stages that lead to a second peak of adults in the fall.

Adults and the nymphs have "piercing, sucking mouthparts. They'll stick that mouthpart into a stem and, kind of like a mosquito drinking your blood, they drink the plant sap," he said. Adults add insult to injury because their saliva is also toxic to the plant.

"If you have enough of them feeding, you can get symptoms showing on the plant. The margins of the leaf blades will be kind of purplish to a whitish color. If you've got a severe infestation, you can see the color change in the blades of grass that are severely affected."

If a homeowner spots a spittlebug, should he go to war with his lawn?

"Probably not," Hopkins said. "You can hand-treat -- literally with your hand or fingers -- and take care of the ones that you see."

Kathy Ratcliffe is one of the Pulaski County Master Gardeners who manage the Carl Hunter meadow patch at Pinnacle. "I've just gone around with a paper towel and started pulling them off," she said. "And you can spray them off with water."

Apart from the problem they pose for turf farmers, Hopkins added, "probably the spittlebug is not going to be a big issue."

So an office-escaping hiker can feel free to enjoy wondering at them as yet another oddball aspect of the natural world?

"I would think so," he said. "They've existed in nature -- co-existed with the plants -- for a long time. And we still have a lot of plants."