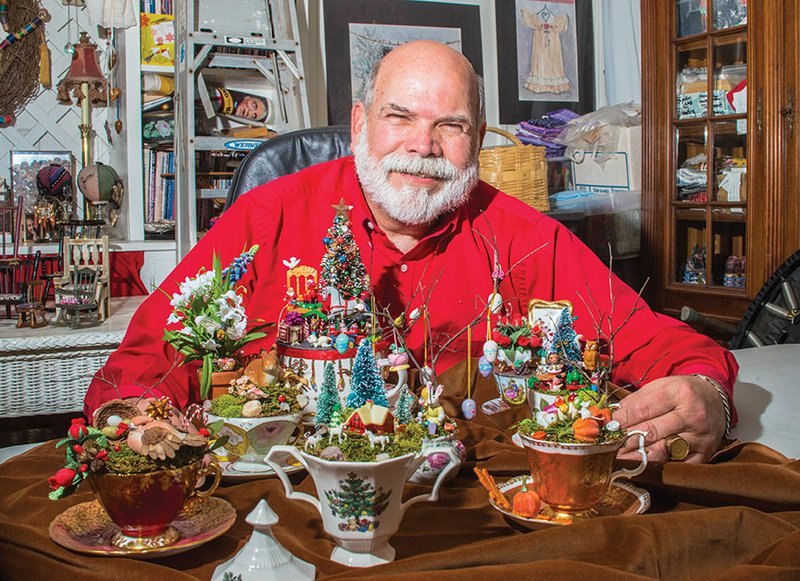 Jim Gatling, art teacher at Sacred Heart Catholic School in Morrilton, sits behind his display of teacup villages. Gatling is retiring from teaching after 41 years, including the past 11 at Sacred Heart.

Jim Gatling is a Renaissance man.

There is little in the area of art that he hasn’t done — watercolor, set and costume design, basket weaving, broom making, wood burning and all kinds of stitchery, including quilts, pieced and woven.

Gatling, of Morrilton, doesn’t see it quite that way.

“As an art teacher, you have to be able to dabble in a lot of things,” he said.

Gatling is retiring this year after 41 years in education. “What I think is unusual is it’s 41 years in the same town,” he said.

Gatling, born in Memphis, Tennessee, and raised on a family farm in Forrest City, comes honestly by his talent for and interest in art. His grandmother painted in oils, and his mother “could do anything” artistic — and did. He said his mother would sit him and his three brothers down on a quilt on the porch every afternoon with a peppermint tin full of crayons and tell them to draw.

“What I realized later in life is that this was her two or three hours of peace and quiet,” he said.

His interest and talent were further nurtured by a special teacher, John Isom, the art teacher at Forrest City High School, a black man teaching in an all-white school before integration. Gatling was taking too full a load his senior year to be able to fit art into his schedule.

“I’d go into his room at lunch and eat lunch with him,” Gatling said, and in return, Gatling would receive lessons, yet Gatling never considered simply creating art as a career.

“From Day 1, I always wanted to be a teacher; I had good teachers growing up,” he said. “One of the things I like about my life is that I love to share.” He said teaching has allowed him to do that.

In his senior year at Forrest City High School and his freshman year at State College of Arkansas (now the University of Central Arkansas) in Conway, he worked summers and weekends at Silver Dollar City in Branson, Missouri, making brooms and baskets and etching designs in pottery.

“It was a wonderful job,” he said. “You got to meet thousands of people.”

Gatling graduated in 1973 from State College of Arkansas with a bachelor’s degree in art and music and went to work as an art and stitchery teacher at Morrilton schools in the South Conway County School District, a job he held for 30 years.

In his second year at Morrilton Junior High School, he decided he wanted his seventh- through ninth-graders to do a group project, but he didn’t know what. He asked his mother for advice, and she suggested quilting. So he purchased the necessary supplies — fabric, scissors, pins and needles. It was a daring project. One student cut off a girl’s hair; two others stabbed each other with the needles, he said. There wasn’t much that could be done about the first mishap, but the second was solved by switching from pins and needles to fabric glue.

Since that first quilt, Gatling has made many art quilts and bed quilts, and the school’s quilt collection, which has been recognized in local, state and international quilt shows, has grown to more than 50 quilts.

At one point, Gatling made 50 quilts in a year. He has had his personal quilts in exhibitions, including several quilts at the National Quilt Museum in Paducah, Kentucky, and he lectures throughout the South. He is the only quilting teacher sanctioned by the Arkansas Department of Education, has taught more than 2,000 children art, needle arts and quilting at Morrilton High School, and continues to lecture throughout the South.

Gatling owns several sewing machines. They range in age from his grandmother’s treadle sewing machine to his state-of-the-art computerized Bernina.

“If the house burns,

I’ll take my Bernina,” he said.

Gatling haunts flea markets seeking items to use in his art. He purchases boxes and such odd items as one wooden shoe to use for his wood burning, and he buys picture frames that he refurbishes and uses for what he calls “primitive small watercolors,” each painted to fit an individual frame. The primitives are so detailed that one can see individual shingles on building roofs and individual plants in a backyard garden. He makes petit-point seats for doll-house sized chairs and petit-point lids for boxes. He collects petit point, he said, and has more than 1,000 pieces. When working on a petit-point piece, Gatling really concentrates, he said.

“One year I went to the Smoky Mountains and

never saw a mountain,” he said, because he was doing petit point in the car.

After his career at the public schools, Gatling joined Sacred Heart Catholic School in Morrilton and taught art to kindergartners through 12th-graders for 11 years.

“I’ve been on a bell schedule for 59 years,” he said, first as a student, then as a teacher.

While teaching and creating art, Gatling also had time to fit in a 25-year career at the Petit Jean Country Headlight, where he was a photographer, writer, ad builder and paste-up artist. After teaching school in the morning, he would go to the paper, where he would often work until 1 or 2 a.m. This career started when, as the school’s information director, he was responsible for school news, and his role grew from there.

Gatling has also been the artistic director, set designer and costume maker for more than 150 school plays, musicals and civic productions, working with his good friend and drama teacher Dianna Denton for 28 years.

In his retirement, Gatling plans to work in his yard, teach private art lessons, paint and draw, sew and quilt, travel and spend time with friends and family. He said he would also like to take some lessons himself, but he doesn’t yet know in what.

He seems to think there is an art form he hasn’t yet tried.