Highways plan tied to earnings down the road

The Legislature and Gov. Asa Hutchinson are relying on the state treasurer’s improved earnings on roughly $3 billion in investments to help generate more money for the state’s highway program and to help pay for a long-term reserve fund for use in economic downturns. 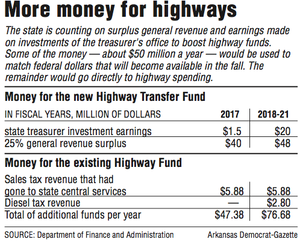 Estimates vary on how much the office of Treasurer Dennis Milligan will earn on investments.

The Arkansas Highway Improvement Plan of 2016 — signed into law by the Republican governor Monday — will include $1.5 million in investment earnings in fiscal 2017 and then $20 million a year starting in fiscal 2018.

The earnings would be part of about $50 million a year in state funds that would be pulled from different sources to match another $200 million in federal funds available each of the next five years under the new federal highway law.

In the first year of the highway plan — fiscal 2017, which starts July 1 — the state’s rainy-day fund would supply most of the money needed — $40 million. In later fiscal years, the plan relies on using 25 percent of future general revenue surpluses.

Hutchinson’s highway plan avoids raising taxes. His original highways proposal didn’t include using investment earnings. He had proposed phasing in the use of up to $25 million a year in sales tax collections on new and used cars.

During the first nearly 11 months of fiscal 2016, the treasury’s earnings are $42.3 million, said Jake Bleed, a spokesman for the finance department.

In response to an Arkansas Freedom of Information Act request for the treasurer’s earnings projections in fiscal 2016-21, Milligan’s spokesman, Grant Wallace, provided the Arkansas Democrat-Gazette with a single handwritten sheet of paper.

Wallace said the paper reflects notes made by the treasurer’s senior investment manager, Ed Garner, at a March 11 meeting at the Department of Finance and Administration “and was responsive to questions that came up during the meeting.” At that time, Garner projected the earnings for fiscal 2016 at $39.4 million, Wallace said.

Although the finance department has estimates for the investment earnings, the treasurer’s office does not, Wallace said.

“We are not in the business of running projections and don’t run projections. We are focused on analyzing investment options and making the best investment possible, not projecting annual returns,” Wallace said.

First Southwest, a Dallas-based financial services consultant, estimated on March 23 in what it described as “our preliminary analysis” that the state should expect to receive about $6.8 million a month in interest receipts from treasury’s investments over the next 24 months. That amounts to about $81.6 million a year.

Department officials don’t necessarily see the treasurer’s office producing $6.8 million a month over the next two years, Bleed said, noting that earnings totaled $4 million to $5 million a month in the past few months.

“The projection made by the consultant [First Southwest] included two interest rate hikes by the Federal Reserve,” Wallace said.

“While we think that is likely, the monthly number we could conservatively estimate does not calculate those rate hikes,” Wallace said. “We are not in the business of projecting and can only estimate based upon the returns we’ve earned thus far.”

Milligan succeeded self-described independent and former Legislative Auditor Charles Robinson of North Little Rock as treasurer in January 2015. Robinson had been appointed by then-Gov. Mike Beebe, a Democrat, in May 2013 after Martha Shoffner of Newport, also a Democrat, resigned as treasurer after her arrest on an extortion charge.

In August, Shoffner was sentenced to 30 months in federal prison after a federal jury found her guilty of six counts of extortion, one count of attempted extortion and seven counts of receipt of bribery in connection with a series of cash payments she received from broker Steele Stephens between 2010 and 2013. She followed Democrat Gus Wingfield of Delight as treasurer in 2007.

“The increased returns we are experiencing is a result of a change in investment strategy, and the fulfilling of a campaign promise the treasurer made to secure the greatest and safest return possible for the taxpayers,” Wallace said.

“That strategy is in part responsive to a study conducted, after Treasurer Shoffner resigned, by [investment consultant] Hewitt Ennis Knupp in November of 2013,” he explained. “One aspect that was pointed out in the study was for the ability of the portfolio to assume some additional market and credit risk to achieve some diversification of the portfolio consistent with modern management practices. This obviously will lead to increased rates of return for the portfolio.

“More specifically, the abilities of [chief investment officer] Autumn Sanson and Ed Garner to analyze the market and investment options available by law and policy have allowed us to take advantage of market timing, trends and investment options, which secured greater returns while maintaining the security of the portfolio,” Wallace said.

The idea for using part of the earnings from the treasury for the long-term reserve fund came from Senate President Pro Tempore Jonathan Dismang, R-Searcy, said House Speaker Jeremy Gillam, R-Judsonia, and Davis.

The Arkansas Highway Improvement Act renames the Arkansas Rainy-Day Fund as the Long-Term Reserve Fund. That rainy-day fund — created under Act 1055 of 2007 — has never been funded and is different from the rainy-day fund that is used by the governor to address needs that can’t wait until the next legislative session. The Long-Term Reserve Fund will be capped at $125 million.

Asked how much Hutchinson projects will be in the Long-Term Reserve Fund in the next few years, his spokesman J.R. Davis said: “It’s impossible to speculate on a number that is dependent on so many variables, like the treasury’s investment returns and the growth of the economy, among other factors.”

The finance department estimates that there will be $47.4 million in increased highway funding in fiscal 2017 and about $76.7 million a year in fiscal 2018-21 under the highway plan.

Devoting 25 percent of the general revenue surplus to highways would have produced an average of $48 million a year over the past 10 years, and “it [is] a very conservative and prudent way to fund the highways,” Hutchinson said.

Opponents of the plan said it’s unwise for the highway plan to count on using one-quarter of an uncertain amount of surplus funds, which have been used to shore up the state budget and for emergencies.

“If you have a downturn in the economy, then we still will have a surplus because we budget conservatively, but it will be a less amount,” Hutchinson said.

He added, however, if there’s no surplus, then 25 percent of nothing would produce no money.

He said some lawmakers have expressed concern that devoting 25 percent of the surplus to highways will mean less money for General Improvement Fund projects recommended by lawmakers.

The Arkansas Highway and Transportation Department has estimated its short-term needs within three years at $110 million more, including $50 million a year to match federal highway funds under the federal Fixing America’s Surface Transportation Act and $60 million a year for overlays, sealing projects and other non-federally funded projects. Those figures were in a report that was released in December by the governor’s highway working group.

Hutchinson said he considers his five-year highway funding plan to be an intermediate plan.

“I think time will tell how well this works and what additional changes need to be made down the road,” he said.

“I do believe that there is a case that can be made for a long-term highway plan. These [highway] commissioners make that [case] every day to me,” Hutchinson said. “There are greater needs, and I know the overlay program for our highways in Arkansas is a significant need.

“I think any other plan that involves a tax increase or a significant tax shift should be brought before the voters,” Hutchinson said. “I will look at what other ideas are there in the January [legislative] session, but I don’t think the mood for simply a tax increase will be any better in January versus now.”

House Revenue and Taxation Committee Chairman Joe Jett, D-Success, said he plans to work on legislation for the 2017 regular session as well as a proposed initiated act to refer to voters that would create a new motor fuels tax that would increase with the Highway Department’s increased material costs. Jett also said he wants to create an earned income tax credit and allow for other income tax cuts that would go into effect based on certain general revenue collections in fiscals 2020-21.

Rep. Charlie Collins, R-Fayetteville, said he would like the Legislature to consider phasing in annual cuts in individual income taxes of roughly $25 million over about four years and a tax that fluctuates with the price of motor fuels to bring in roughly $24 million a year over the same period.

Rep. Davis, Act 1’s sponsor, said he’s considering proposing a phased-in reallocation of about $100 million a year from the sales tax on new and used cars to the Highway Department.

The Senate Transportation, Technology and Legislative Affairs chairman, Sen. Bill Sample, R-Hot Springs, said he wants to research how each of Arkansas’ surrounding states are paying for highways and then try to formulate a long-term plan.

A group opposing raising gas and diesel taxes “put out a big story on us” about Arkansas having higher fuel excise taxes than surrounding states, “but they left out the rest of the story,” Sample said.

In this year’s fiscal legislative session, the General Assembly and Hutchinson enacted a state budget that would distribute $5.33 billion in state general revenue in fiscal 2017 — up from $5.19 billion in fiscal 2016 — with most of the general-revenue increase of $142.7 million targeted for the state Department of Human Services and public schools.

The Revenue Stabilization Act factors in nearly $101 million in individual income-tax cuts enacted by the 2015 Legislature and Hutchinson.

In January, Hutchinson said he ultimately wants to cut the top income tax rate to 5 percent, and “it is going to take a while to get there.” Asked whether Hutchinson plans to propose another individual income tax rate cut for the 2017 Legislature to co

Print Headline: Highways plan tied to earnings down the road