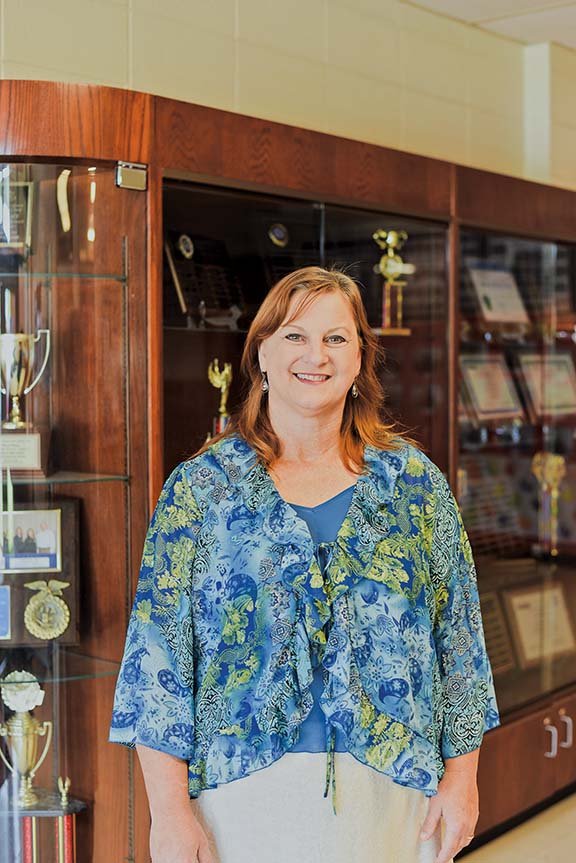 Donna Clark will retire at the end of the month as principal of Midland High School in Pleasant Plains. She has been in the field of education for a total of 28 years.

PLEASANT PLAINS — Donna Clark, 50, is retiring after a 28-year career in education. She has been principal at Midland High School since 2008.

“God, my family and friends and all the students whose lives I am allowed to help are my inspiration,” she said, reflecting on her years as a teacher and principal. “My husband, Mike, and my daughters, Shawnee and Sierra, are my greatest supporters. They willingly share time that I should spend with them to let me help where I feel I am most needed so much of the time.”

Born and raised in Rector, Clark graduated from Rector High School in 1989. She graduated from Arkansas State University at Jonesboro with a Bachelor of Science in Education degree in 1988. She received a Master of Science in Education degree in education theory and practice from ASU in 2004 and a Specialist Degree in educational leadership from ASU in 2006.

Her first teaching job was for the Oil Trough/Newark School District in Oil Trough from 1988-1999. She came to work at the Midland School District, first as a fifth- and sixth-grade teacher in 1999 and then back again as the principal at Midland High School in 2008.

“I’ve taught everything, to all ages of kids,” she said with a laugh. “I left here in 2006 and went to the White County Central School District in Judsonia, where I was the math coach for two years. I’ve worked with some of the finest people I’ve ever known, and the kids have just been awesome.

“The Midland School District may be small, but we have never, ever been in academic distress. We do a really good job of teaching our students, … getting them ready for college or the workforce. We try to focus on the education of our kids.”

She attended the NASSP convention in San Diego as president of the organization’s board of directors in 2015. She received Discovery Education’s Visionary Leader Award from the Discovery Education Administrative Academy in 2014 and was named the Optimist Educator of the Year by the Batesville Optimist Club in 2014. She was also named the White River Reading Council Administrator of the Year in 2014.

Clark received a legislative visit to Capitol Hill in Washington, D.C., as president-elect of the AASSP board of directors in 2013.

“I have no definite plans for retirement,” she said. “I want to spend some downtime

Clark’s older daughter, Shawnee, 22, completed her bachelor’s degree in animal science at ASU and has just finished her first year in veterinarian school at Louisiana State University in Baton Rouge. Clark said Shawnee plans to come back to Arkansas to practice when she finishes school in three more years.

Clark’s younger daughter, Sierra, 17, will be a senior next year at Midland High School and is looking toward something in the STEM (science, technology, engineering and mathematics) field when she goes to college. She will travel to Peru this summer and explore the Amazon Rain Forest, Machu Picchu, Cusco and Lima.

“He cares for our animals, which provide a great escape for me when the pressure of school becomes overwhelming,” Clark said, adding that they have been married 32 years.