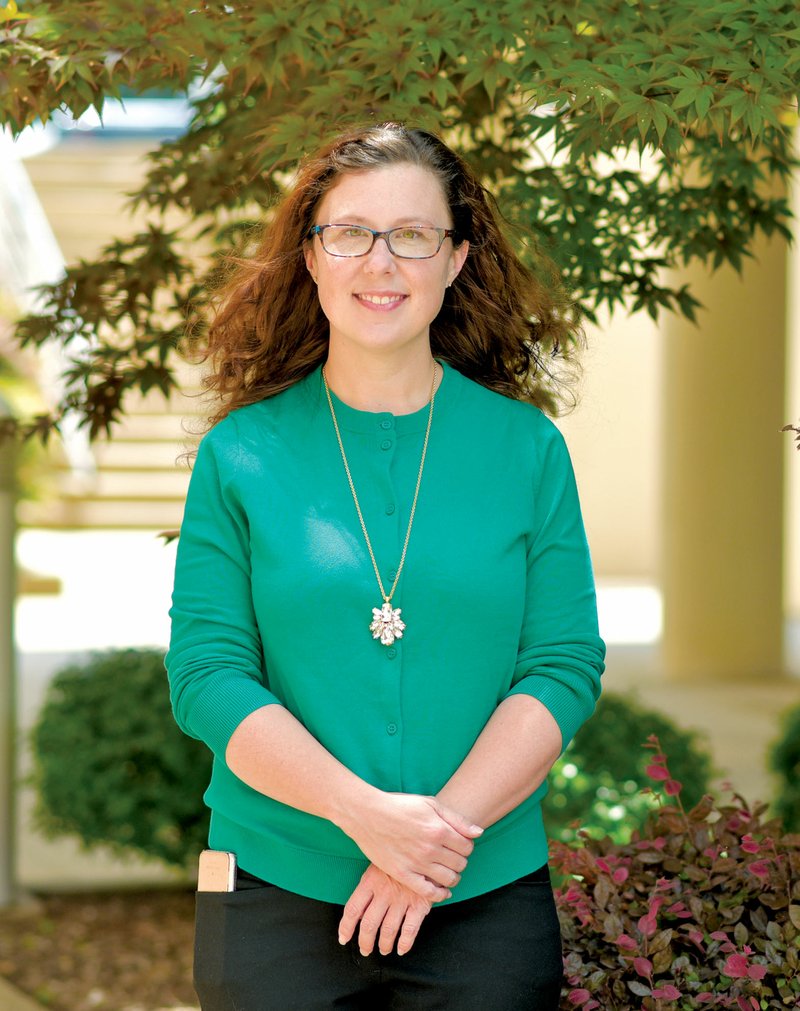 Dr. Kristin Patton is Saline Memorial Hospital’s new general and bariatric surgeon. She brings an unusual approach as a female surgeon when comforting and caring for her patients.

After the hustle of big-city life in Chicago, Dr. Kristin Patton said she was happy to return to the South to be closer to her Mississippi roots.

Patton joined Saline Memorial Hospital in Benton in February as a general and bariatric surgeon. She couples her calming demeanor with trauma-surgery training to give patients comforting personal care.

When she was a girl, it didn’t take long for Patton to realize what she wanted to be when she grew up. She was mesmerized by her grandfather, who was a firefighter, she said. “He was always telling me stories of car accidents and how he would stabilize patients until they reached the hospital.”

A road trip when she was young sealed Patton’s career fate.

“We saw a car go off the road and flip. I saw my grandfather respond and was amazed at how he just knew what to do. I was fascinated and wanted to grow up to be someone who could rescue others.”

Patton earned her undergraduate degree in biology from Baylor University. “Sic ’em, Bears,” she immediately said after mentioning Baylor. During football season, Patton can be found glued to the TV watching college football.

Her original plan when she entered medical school at the University of Mississippi in Jackson was to become a trauma surgeon, chasing her childhood dream. However, after being involved with so much trauma surgery her last year of medical school, she found that it wasn’t as fulfilling as she had expected it to be.

“I went to the program director and said I was having second thoughts and was told I should go the minimally invasive surgery route,” she said.

After completing her residency in Mississippi, Patton moved to Chicago with her husband, an operating-room nurse she met while in residency, for her fellowship at the University of Illinois.

“My fellowship included bariatric surgery,” she said. “What I didn’t expect to learn is how much I love bariatric surgery. It’s so fulfilling to help people who have been struggling to lose weight all their lives.”

Arkansas has the highest rate of obesity in the nation, Patton noted, adding that bariatric surgery can be ultimately just as lifesaving as trauma surgery.

“Obesity kills people, and bariatric surgery helps them lead healthier, happier lives,” she said. “Surgery might be expensive, but after people have tried everything to lose weight, if they don’t do something, the medical problems that could ensue can cost a lot more than surgery.”

Patton and her husband lived in Chicago for three years. Their son, Frankie, named after her grandfather, was born there, and the family enjoyed the metropolitan life, but they missed the South and being close to other family members. About the same time Patton started looking for a job and sending out her resume, she received a call from Saline Memorial Hospital. Coincidentally, CEO Bob Trautman’s stepson was in residency with Patton, she said.

“We love it here. It’s so beautiful,” Patton said about Saline County and central Arkansas. We immediately felt very comfortable and at home. Everyone at Saline Memorial is so warm and welcoming.”

Patton said there still aren’t a lot of female surgeons. She noted that this gives her a special perspective because many times, women are more comfortable talking to another woman about their medical needs, especially when weight loss is involved.

In Chicago, Patton said, she worked under two of the best surgeons she’s ever met.

“One specialized in robotics and the other in bariatrics. I got to see them work through the worst cases, which makes the simpler cases that much more simple. When you learn how to fix the worst, you can fix the easiest.”

“You’ll lose a lot of weight, feel a lot better every day, move around better,” she said. “Your joint pain may go away, you’ll slowly get off medications, and you’ll be able to do a lot more things that you couldn’t do before, like go out with family and friends and play ball in the park with your children.”

She said she sees “all types of patients” and really takes pride in the fact that she takes time to know them. With bariatric patients, care doesn’t stop at surgery, she said.

“We get on this weight-loss journey with them, and they come in every three months or so, and we help them make sure they’re staying on track.”

Patton’s workweek is packed with clinic days and surgery. Typically, she has clinic on Mondays and Tuesdays; then she travels with Luttrell on Wednesdays for work in Little Rock and Russellville. She spends the latter part of the week in the operating room.

Her work extends beyond the hospital doors, however.

“I worry a lot about my patients and how they’re doing and if they’re recovering,” she said. “I think about them at night when I’m going to sleep and in the morning when I wake up; sometimes I dream about them. I think this is normal, but it’s challenging because I have a family and don’t want to bring work home. But I think this makes me a better doctor as well. I follow my patients closely, check on them a lot, and this alleviates my worry. If anything, I want to be as caring and as aggressive as possible in their care.”

Soothing patients’ concerns before surgery is part of Patton’s total-care approach. Surgery can be a scary thing for people, she said, because they have to give up control.

“I tell people, ‘Let me do the worrying for you,’” she said.

Anesthesia is another common concern of people about to undergo surgery.

“General anesthesia is safer than driving your car to work, really,” Patton said. “I tell patients every possible complication and let them know the chances of those complications. I’ve found if a patient has what they feel is enough information going into a procedure, they are much more relaxed and comfortable.”

Something surprising about surgery, Patton said, is that many people don’t realize how effective laparoscopic surgery is.

“They don’t realize how much we’re able to do laparoscopically,” she said. “Almost every surgery nowadays can be done with minimal incisions, which cuts down on recovery time and possible complications with scar tissue.”

While Patton took a slightly different medical path than the child inside her had dreamed about, she said she has found her purpose and the perfect way to “rescue” people.

“I think it’s one of the most fulfilling jobs to have,” she said. “My job is to help people feel better and alleviate their problems. Surgery immediately gratifies me. For example, I can help someone right away who is in a lot of pain and needs their gallbladder removed.”

For aspiring doctors, Patton encourages them to never lose sight of why they chose medicine.

“There is a lot that can get in the way, such as insurance, bureaucracy and medical records,” she said, “but if you just keep your focus on helping the patient, then ultimately, you’ll be doing the right thing.”