State revenue up $39.6M in October 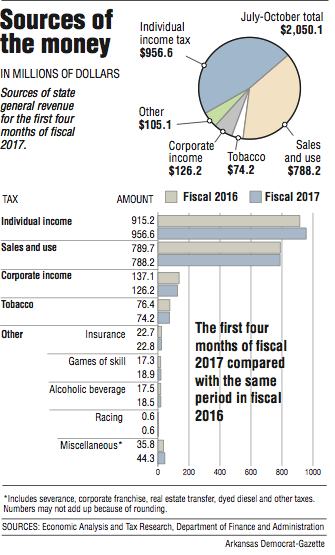 Fueled by increased individual and corporate income-tax collections, state general revenue in October increased by $39.6 million over a year ago to $530 million and exceeded the state's forecast by $19.3 million.

October is the first month in fiscal 2017 in which general-revenue tax collections exceeded the forecast, the state Department of Finance and Administration said Wednesday in its monthly revenue report. In July through September, total tax collections lagged behind the forecast because of lower-than-expected sales- and use-tax and corporate income-tax collections. The fiscal year started July 1.

The month's $530 million in general-revenue collections is a record for an October, outdistancing the $490.4 million collected in October 2015, said Whitney McLaughlin, a tax analyst for the finance department.

"The revenue report for October shows steady growth and brings us closer to hitting our forecast for the year," Gov. Asa Hutchinson said in a written statement. "Individual income taxes are a particularly bright spot. Even after accounting for the landmark income tax cuts adopted in 2015, we're still seeing solid growth in individual income tax collections. This is a good sign that more Arkansans are working hard and earning more. In fact, 56,000 Arkansans have moved off SNAP benefits in the last year."

Hutchinson, a Republican, said the latest revenue report "shows a different and more positive outlook for Arkansas's economy than we've seen in the past several months."

"As I work on the budget for the next biennium, I do intend to be mindful of the current unpredictability of consumer spending and we will continue to take a conservative approach in budgeting," he said. Last month, he said consumers may be spending cautiously as Tuesday's presidential election approaches.

Tax refunds and some special government revenue, such as court-mandated desegregation payments, come off the top of total general revenue, leaving a net amount that state agencies are allowed to spend.

Tim Leathers, deputy director for the finance department, said, "There is no reason to think about changing the forecast at $23 million down" for fiscal 2017.

"Right now ... we are confident that we are going to make the forecast before the year's end," he said. "We'll monitor it since we are below."

A Joint Budget Committee co-chairman, Sen. Larry Teague, D-Nashville, said the general-revenue forecast was "a little ambitious" during the first few months of fiscal 2017, but he anticipates collections eventually will catch up to the forecast.

Earlier this year, the Republican-controlled Legislature and Hutchinson enacted a $5.33 billion general-revenue budget for fiscal 2017 that factors in nearly $101 million in income-tax-rate cuts approved in 2015. Most of the $142.7 million increase in the budget goes to the Human Services Department and public schools under the Revenue Stabilization Act enacted in this spring's fiscal session.

On Wednesday -- the day after the general election -- the governor is to propose a general-revenue budget for fiscal 2018, which starts July 1, 2017. The budget will be based on a forecast for that fiscal year.

Nearly a month ago, Hutchinson said he believed the state could conservatively afford a $50 million-a-year income-tax cut, but he hadn't yet decided on how large of an income-tax cut he will ask the Legislature to enact in the 2017 session starting Jan. 9.

Legislative leaders have said that before committing to the size of any particular income-tax cut, they want to see Hutchinson's proposed budget, the forecast for fiscal 2018 and a few more months of collections in this fiscal year.

Individual income-tax withholdings are the largest category of individual income-tax collections. They increased by $27.9 million over what was collected a year ago to $211.7 million, which exceeded the state's forecast by $5.8 million, McLaughlin said. There was one more payday last month than there was in the same month a year ago, said John Shelnutt, the state's chief economic forecaster.

Shelnutt said sales-tax collections for motor vehicle sales were essentially flat compared with a year ago. Leathers said automobile sales have been flat across the nation.

"Things are looking up and we'll see how we're looking next month and, if we can continue this positive trend, that would be, I think, what is everybody is hopeful for, so we'll see if we back out by the end of the year and be at forecast," he said.

The first three months of fiscal year 2017 "may have been a little more of an aberration than what was originally thought," Gillam said.

Leathers said the state's tax collections are in line with other states "for this region, except the heavily energy, oil-related, gas-related economies are worse."

Kansas collected nearly $13 million less in taxes than anticipated in October, with the report Tuesday coming a week before an election determines whether voter discontent with Gov. Sam Brownback will cost his fellow Republicans seats in the Legislature.

The Kansas Department of Revenue's report marked the sixth-consecutive month of lower-than-expected tax collections. Brownback told The Associated Press that it's another sign of a "rural recession" tied to slumps in agriculture and energy production and affecting other states.

But Brownback's fellow Republicans have faced a backlash for months over the state's financial problems. Kansas has struggled to balance its budget since GOP lawmakers slashed personal income taxes in 2012 and 2013 at the governor's urging in an effort to stimulate the economy.