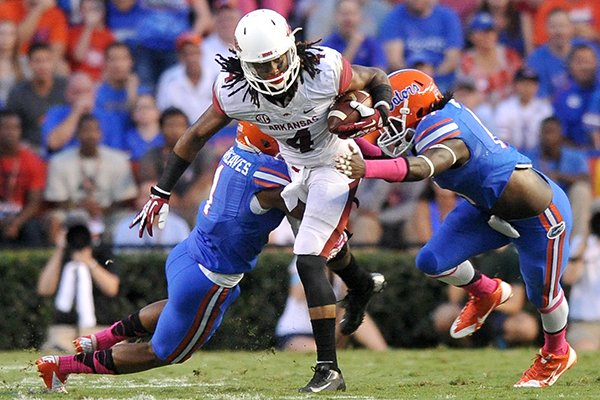 Arkansas receiver Keon Hatcher is tackled during a game against Florida on Saturday, Oct. 5, 2013, in Gainesville, Fla.

FAYETTEVILLE -- The first football game between Arkansas and Florida resulted in a 28-24 victory for the No. 14 Razorbacks at the Astro-Bluebonnet Bowl on Dec. 31, 1982.

Arkansas-Florida series by the numbers

1 Arkansas victories in the series

3 Times Florida has been ranked No. 1

4 Times Arkansas has been ranked

6 Arkansas losses by 15 or more points

8 Times Florida has been ranked

9 Florida victories in the series

Arkansas joined the Gators in the SEC 10 seasons after the Astro-Bluebonnet Bowl. The Razorbacks haven't beaten Florida since that game in Houston 34 years ago.

The Gators are 9-0 against Arkansas since Coach Frank Broyles made the decision to leave the Southwest Conference and join the SEC for the 1991-92 season.

Arkansas' losses in the series have come in a lot of different ways, but they have stacked up over the years to paint a picture of domination. Florida has won six of the games by 15 or more points.

Arkansas Coach Bret Bielema knew the sorry state of the series at his Monday news conference.

"0-9, right?" he responded when asked whether he knows about the one-sided results since Arkansas joined he SEC. "I think our guys are made aware of it, and today, with everything you guys have out there, that social media has out there, I think our guys are much more in tune with those types of things, positively or negatively, than at any other time since I've been coaching.

"So you don't just ignore it. You don't just put it in the back of your head and act like it's not there. You definitely address it. To me, that's a very fun thing to bring up. It's their chance to do something that's never been done."

Arkansas linebackers coach Vernon Hargreaves, whose son was a first-round NFL Draft choice from Florida after last season, said he had heard somewhere about the lopsided series.

"There's always a first time for something," Hargreaves said. "It's got to happen, and hopefully it's going to happen eventually and hopefully it happens this week. We'll see. They're a great football team."

Bielema apparently has been holding on to the series stats for game-day fuel. Some Arkansas players were aware of the results during player interviews Tuesday and Wednesday, and some were not.

Tight end Jeremy Sprinkle was asked Wednesday evening whether the coaching staff had mentioned it.

When told of Arkansas' 0-9 record against the Gators since joining the SEC, Sprinkle replied, "We gotta come out and get the first 'W' then."

Receiver Keon Hatcher said he wasn't fully aware of the series, but he had seen a Twitter post "that said we haven't beaten them the last three times they've come here."

The post would be accurate. Florida is 3-0 against Arkansas at Reynolds Razorback Stadium, winning by a combined score of 113-42.

Defensive end Jeremiah Ledbetter, a native of Orlando, Fla., was up to snuff on the short-term rivalry.

"We haven't beaten Florida, so we're really focusing on that," he said.

"A bunch of guys on the team didn't know that Arkansas and Florida have ever played before," quarterback Austin Allen said. "So they don't really look much into that. We're just trying to go out there Saturday, playing well and trying to get a 'W.'"

No matter whether the Gators were coached by offensive innovator Steve Spurrier (3-0 vs. the Hogs at Florida) or Ron Zook (2-0), Urban Meyer (3-0) or Will Muschamp (1-0), they haven't lost to the Razorbacks.

Lou Holtz guided Arkansas to the bowl victory over Florida, but subsequent coaches Danny Ford (0-3), Houston Nutt (0-3), Bobby Petrino (0-2) and Bielema (0-1) have all been Gator bait.

Lunney joked that he didn't remember much from that game at the Georgia Dome before adding, "I wish I didn't remember as much as I do. I remember it was, honestly, probably the most difficult environment we had played in at that time.

"It was indoors and probably was 95-5, maybe 90-10 [percent] Florida fans. There was a lot of Gators and not a lot of red. They were No. 1 in the country. I don't think the score indicates the closeness of that game. We had a chance in the third quarter."

Florida Coach Jim McElwain, who was offensive coordinator and quarterbacks coach for Alabama teams that beat the Hogs in Fayetteville in 2008 and 2010, talked up the atmosphere he expected his team to see Saturday in the Ozarks.

"How many of you guys have been to Arkansas for a game?" he asked at his Monday news conference. "So you kind of know the environment they have created there. It's cool, and them running out of that Hog pen, Bret's done an outstanding job with that program.

"And what they've done as a program in November? I mean, take a look at that. For our guys going into that environment, I'm looking forward to it. I'm looking forward to our guys experiencing that. That's what playing at a place like Florida is all about, is those opportunities to go in and match yourself in an uncomfortable place. It should be a lot of fun."