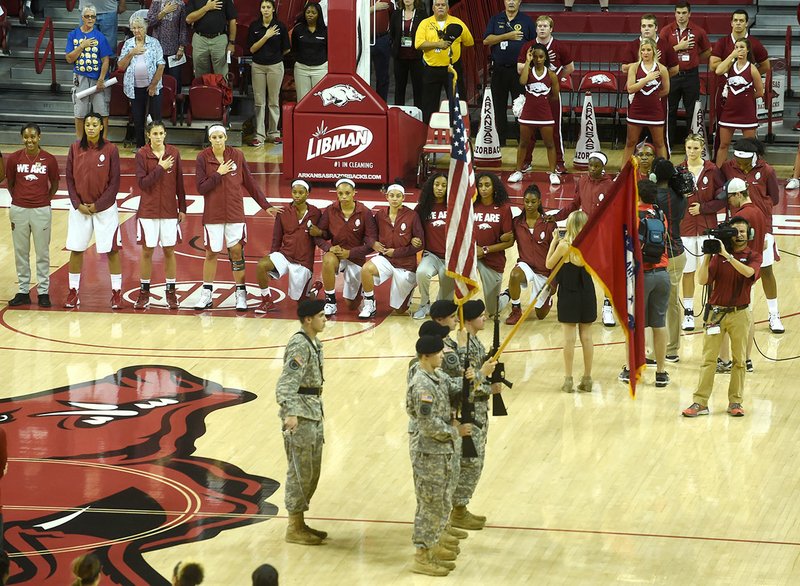 NWA Democrat-Gazette/MICHAEL WOODS Several members of the Arkansas women&#8217;s basketball team takes a knee during the national anthem on Thursday before the start of their exhibition game against Oklahoma Baptist at Bud Walton Arena in Fayetteville.

Danberry, Freeman and Williams discussed their decision in the postgame news conference.

Keiryn Swenson, one of the players who did not kneel, also spoke to the media.

Danberry, a sophomore from Conway, said the move was a way to speak out against what she called an "unjust system." She also said the team would discuss whether to continue the practice before its next game.

"Recently, you all know that there's been a lot of killings from police officers of African-Americans and other minorities," Danberry said. "Me and my teammates took a knee today during the national anthem to speak for those who are oppressed. As Razorback student-athletes, we have a platform to do that."

Swenson said she supported her teammates and the movement, although she chose not to join them.

"I want to stand in honor of my cousin," Swenson said. "He was in the military, and he passed away last year."

Arkansas Coach Jimmy Dykes said he stands behind his players.

"We have had tremendous dialogue as a staff with them over the last couple of weeks and even before that individually," Dykes said. "I met with them as a group this week on a couple of occasions. They had very, very strong, well-informed, educated opinions based on their real-life experiences, their real-life emotions. I am very, very proud of them.

"They know I have their back 100 percent. Because we do live in a country that is the land of the free and the home of the brave. I know we spent a lot of time visiting with them, and they understood everything that is going into this evening."

"In this country, we value everyone's right to voice their opinions and views," Long said in a news release. "University campuses are places of learning and thus places where differences of opinion and varying perspectives are recognized. We respect the rights of our student-athletes and all individuals to express themselves on important issues in our nation."

In the game, the Razorbacks rode solid defense and rebounding to pull away from Oklahoma Baptist.

Arkansas led 29-17 at halftime, then outscored Oklahoma Baptist 26-4 to start the second half to take a 55-21 lead and kept expanding the advantage to the finish.

Swenson, Jessica Jackson and Bailey Zimmerman each hit three-pointers during the second-half run.

Four Arkansas players scored 10 or more points, with Jackson and Danberry leading the way with 14 each. Malica Monk added 13, while Mason had 10. Tasha Edge led Oklahoma Baptist with nine points.

Arkansas limited Oklahoma Baptist to 12 points in the middle two quarters, after giving up 11 in the first quarter. Arkansas outrebounded Oklahoma Baptist 55-30, including 23 offensive rebounds. The Lady Bison committed 26 turnovers.

Smith, Ratliff, freshman Aaliyah Wilson and junior Devin Cosper did not play. Wilson and Smith were sidelined by illness, while Cosper and Ratliff are recovering from undisclosed injuries. Dykes said the full team should be back in two or three weeks.

The Razorbacks open the regular season Nov. 11 at 10:30 a.m. against Sam Houston State in Walton Arena.