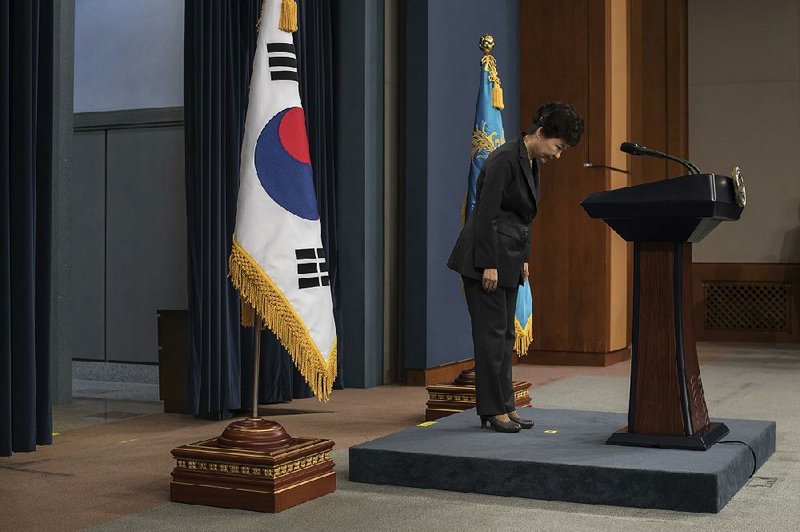 South Korean President Park Geun-hye gets ready to address the nation Friday in Seoul. “I feel a huge responsibility deep in my heart,” she said about the scandal rocking her administration.

Park also vowed to accept a direct investigation into her actions, but the opposition, sensing weakness, immediately threatened to push for her ouster if she doesn't distance herself from domestic affairs and accept a prime minster chosen by the parliament.

"I feel a huge responsibility deep in my heart," Park said during a televised address to the nation. "It is all my fault and mistake."

Park's comments were rife with astonishing moments, and included a frank assessment of her relationship with the woman at the heart of the scandal, Choi Soon-sil, the daughter of a cult leader and a longtime friend of Park's.

"I put too much faith in a personal relationship and didn't look carefully at what was happening," Park said. "Sad thoughts trouble my sleep at night. I realize that whatever I do, it will be difficult to mend the hearts of the people, and then I feel a sense of shame and ask myself, 'Is this the reason I became president?'"

Park also denied media speculation that she had "fallen into worshipping cult religions or that shamanistic rituals were held at the presidential Blue House."

Park is attempting to show the contrition and sense of responsibility that South Koreans demand while also trying to re-establish her tarnished credibility. She is in the fourth year of a single five-year term and faced criticism even before this scandal, particularly for the government's response to a 2014 ferry sinking that killed more than 300 people.

"Anyone found by the current investigation to have done something wrong must be held responsible for what they have done, and I am also ready to face any responsibility," Park said. "If necessary, I'm determined to let prosecutors investigate me and accept an investigation by an independent counsel too."

Last week Park surprised many when she acknowledged that she had relied on Choi for help editing presidential speeches and other undefined "public relations" issues.

Anger has exploded in the days since, with media reports claiming that the influence Choi had went much deeper. There are reports that Choi reviewed and made recommendations on government policy papers and pushed businesses to donate millions of dollars to two foundations that she controlled. Other reports speculate Choi also helped choose presidential aides and even picked out Park's wardrobe.

Soon after Park's speech, the main opposition Democratic Party said her apology lacks sincerity and issued a set of demands that it says Park must immediately accept if she doesn't want see rallies calling for the end of her government. The demands include Park withdrawing her prime minister nomination which the opposition says is "unilateral"; nominating a new person recommended by the National Assembly for the country's No. 2 job; and accepting separate investigations by lawmakers and an independent counsel.

"The president now comes right into a dead end," party chief Choo Mi-ae told a televised conference. Park "must comply with what the people want."

Park may survive what has become the worst patch of an already rocky term. But if she is forced to name a prime minister chosen by the opposition, it will hamstring her authority and may end her ability to govern.

Only Choi has been formally arrested in connection with the scandal. Prosecutors on Friday requested an arrest warrant for ex-Park aide, Ahn Jong-beom, for his alleged involvement in extracting $70 million in donations. On Wednesday night, prosecutors detained another ex-presidential aide, Jeong Ho-seong, for allegedly leaking confidential documents to Choi, and are reviewing whether to seek an arrest warrant for him, too.

Park said she couldn't talk about many specifics because of the investigation, but she was frank in her comments about Choi, who has been the subject of widespread rage.

Choi was "a person who stood with me during the hardest moment in my life," Park said in her speech, apparently referring to the assassinations of Park's mother and later her father, the dictator Park Chung-hee. "It's true that I lowered my guard and my sense of wariness" of Choi.

Information for this article was contributed by Kim Tong-hyung of The Associated Press.