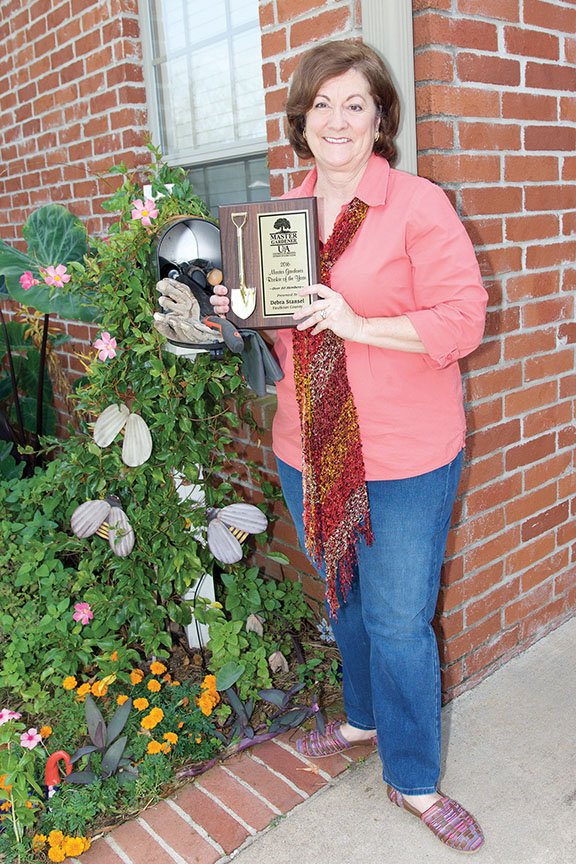 CONWAY — Debra Stansel, 59, has always enjoyed gardening, “even as a child,” she said.

“I always wanted to be a Master Gardener, so after I retired, I decided to get involved. I hit the ground running,” she said.

“I was surprised by the county honor, but I found out about the state honor beforehand, quite by accident. I am a member of County 76 (an advisory group for the Arkansas Master Gardener program) and was working on the program for the state conference and saw my name.”

In order to become a certified Master Gardener, a person has to complete 40 hours of training offered by the University of Arkansas Cooperative Extension Service, then volunteer at least 40 hours of his or her time during the following year. Stansel logged more than 300 hours in her first year as a Master Gardener.

When introducing Stansel at the state conference, Janet Carson of Little Rock, state coordinator for the Arkansas Master Gardener program, said Stansel “volunteered 284 hours in sanctioned projects, 99 education hours and 10 hours of nonsanctioned projects. In all, she has recorded hours in 28 projects and committees in her first year.”

Carson concluded her remarks by saying, “Debra has been an eager new Master Gardener, and we see an up-and-coming future leader in our program.”

Meg Fox of Russellville, chairwoman of the County 76 Recruitment, Retention and Recognition Project that oversees the state awards that are presented each year, said, “While I don’t know Debra well, she recently joined the RRR Project of County 76, and I can tell she will be a real asset for the project.”

“I just really enjoy working there, especially in the heirloom garden,” she said.

“I also love photography. I coordinated with the museum to organize a photography exhibit featuring the native plants and flowers that grow in Faulkner County. That exhibit — Flowers in Focus — featured photos taken by many of our Master Gardeners and was on display at the museum for a month.”

Stansel retired a few years ago after 20 years as a supervisory U.S. probation officer in Little Rock. She grew up in Georgia but was born in

“My dad was in the Air Force, and we moved all around,” she said.

She graduated from Northside High School in Warner Robbins, Georgia, and from Valdosta State College (now Valdosta State University) with a Bachelor of Science degree in criminal justice.

She met her husband, Steve Stansel, while in Valdosta. He is retired from the U.S. Border Patrol and is now a corporate pilot for Koontz Electric Co. in Morrilton.

Jon-Stephen and his wife, Annie, are expecting a baby boy soon. They live in San Marcos, Texas, where he is the social-media coordinator at Texas State University.

Debra Stansel grows a wide variety of plants and flowers in her backyard.

When asked what her favorite flower is, she said, “I love all flowers, but maybe because we’re expecting our first grandchild, I’ll have to say the daffodil — the Sir Winston Churchill Daffodil.

“Jon-Stephen and Annie are naming their son Winston, after Winston Churchill,” she said, smiling.

“I have 193 different varieties of daffodils out there,” she said, pointing to her backyard. “I was recently going through a magazine and discovered the Sir Winston Churchill Daffodil. I’ve ordered 150 of those daffodils and will share some with Annie and Jon-Stephen.”

Debra Stansel is also a beekeeper and is a charter member of the Lady Beekeepers of Arkansas. She does not maintain her beehives in her backyard, however, because the family now has a dog, a beagle named Luna.

“Luna rules over the house and the yard,” Stansel said, laughing. “She helps me in the garden — she digs two holes, and I dig one.

“Our yard has to be dog friendly. I don’t use any pesticides, nor do I plant anything that might harm the dog. I used to have the honeybees out there, but we moved them after we got Luna, who is really Jon-Stephen’s dog, but he couldn’t keep her when he moved to Texas, so we have her now. She goes with us to visit them every four or five weeks.”

Stansel also enjoys making pottery and incorporates some of her creations into her flower gardens. She works on her ceramics at the Arkansas Arts Center in Little Rock.

“I have a sensory garden,” she told visitors as they walked through her backyard. “I plant things like rosemary, lemon and thyme for fragrance. For texture, I have lamb’s ear. For sight, I have big elephant ears and the little ceramic gnomes that I have made.

“I also have an azalea garden. They are all one color — fuchsia. I did that to honor Valdosta, [Georgia], which is called The Azalea City.”