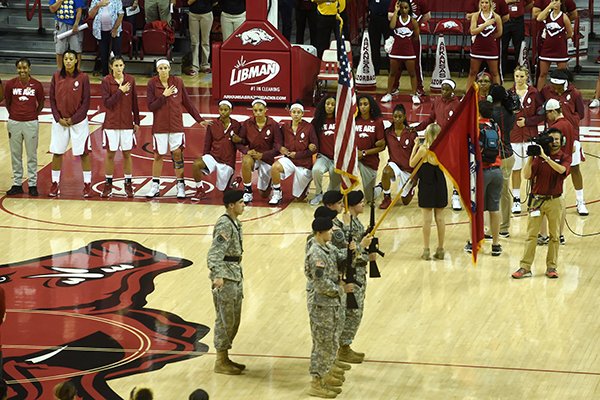 Arkansas basketball players kneel during the playing of the national anthem prior to an exhibition game against Oklahoma Baptist on Thursday, Nov. 3, 2016, in Fayetteville.

Following the lead of other collegiate and professional athletes nationwide who have refused to stand during the anthem, the women told reporters after Thursday's home exhibition win over Oklahoma Baptist University that they had chosen to protest police killings of blacks and other minority-group members.

Women's basketball coach Jimmy Dykes said he had spoken with players about their plans ahead of time, and was joined by Arkansas Athletic Director Jeff Long and Chancellor Joseph Steinmetz in offering support for their right to express their feelings.

Still, the team prompted angry reactions from many fans, and at least three Republican lawmakers took to social media to criticize the school.

Sen. Alan Clark of Lonsdale, Rep. Kim Hammer of Benton and Rep. Laurie Rushing of Hot Springs suggested they would either decline to increase the university budget or cut it. The next legislative session starts in January.

"Cutting the university's budget in response to the athletes exercising their First Amendment rights is ridiculous and irresponsible," said Rep. Greg Leding, D-Fayetteville, whose district includes the University of Arkansas campus.

Speaker of the House Jeremy Gillam, R-Judsonia, said he had not had conversations with many members of the House, but said he plans to speak to them about "unintended consequences."

The University of Arkansas' athletic program is self-sustaining and does not receive money from the state general fund, according to the athletic department.

Clark said he would offer an amendment to a $190 million appropriations bill for the university and its related entities to cut funding in an amount equal to the budget of the women's basketball program.

According to Razorbacks athletics spokesman Kevin Trainor, the women's basketball budget was $4,278,379 in 2016.

Reached by phone Monday, Clark said his issue wasn't with the players who knelt, but with the school administration, whom he accused of having an inconsistent free speech policy when it comes to other students.

"Universities today are not known for being the biggest places for free speech," Clark said. "We've got microaggressions, we've got opening your mouth for anything being considered hate speech."

Clark also said he believed the student-athletes were operating under the direction of a faculty member or administrator, though he said he had no evidence to support this claim and had not spoken to any of the women on the basketball team.

"I despise the fact they are hiding behind six probably awesome young ladies and the First Amendment," Clark said.

A spokesman for the University of Arkansas denied that anyone at the university had told told the players to kneel before the game.

"They were under no direction to do so, it was their choice," university spokesman Mark Rushing said.

Rep. Rushing, who is of no relation to the university spokesman, also expressed dismay with the university leadership in a statement criticizing Dykes and Long for giving their support.

Her husband, Cliff Rushing, said the representative was undergoing a routine medical procedure, and he spoke on her behalf.

"She wants to be clear that she doesn't disagree with their cause. She said she disagreed with the venue where it was allowed to happen," Cliff Rushing said. "She was wanting to vote against any of the funding that goes to their salaries that is from the general fund."

The third lawmaker who threatened to take action on the university budget, Hammer, did not respond to a phone call Monday. In a Facebook post made the night of game, Hammer argued that other collegiate coaches had persuaded players to stand during the anthem.

"The U of A Lady Razorback Basketball team are welcome to kneel during the National Anthem to express their right to freedom of speech," Hammer wrote. "I will express mine when the U of A is in front of us asking for budget increases."

While states are not required by the U.S. Constitution to fund certain programs, taking political action against the university for protected speech is legally dubious, said John DiPippa, a professor of constitutional law at the University of Arkansas at Little Rock's Bowen School of Law, which also receives state funding.

"Generally, courts are reluctant to determine motivations of legislators, especially in First Amendment cases," DiPippa said. "Once you get into targeting activity ... then you have a clearer First Amendment speech issue showing up."

In addition to threatening a budget cut, Clark said he had requested a hold on the university appropriation with the support of other lawmakers, though he declined to name others beside Hammer and Rushing.

Holds are a relatively routine action taken when lawmakers have questions or concerns about an appropriation bill that they would like to have answered.

Pointing to Title IX of the federal Education Amendments of 1972, which prohibits sex discrimination in publicly funded schools, Leding said Clark's proposal to cut an amount from the university's appropriation equal to the women's team budget could violate federal law.

"That would seem to fly in the spirit of Title IX, if not actually violate it," Leding said.

Leding said he has heard from students and constituents who are in support of and opposed to the players' protest. He also said he reached out to one of the players on Facebook to have a private conversation with the team, but has not heard back.

Steinmetz said in a statement late Monday that he believes "legislators have the university's best interests at heart."

Dykes said Monday he doesn't know what the players will do in their next game. The team's first regular season game is Friday -- Veterans Day.

Reporters Brian Fanney and Mike Wickline of the Arkansas Democrat-Gazette contributed to this story.