Prospect of flip in Senate fading 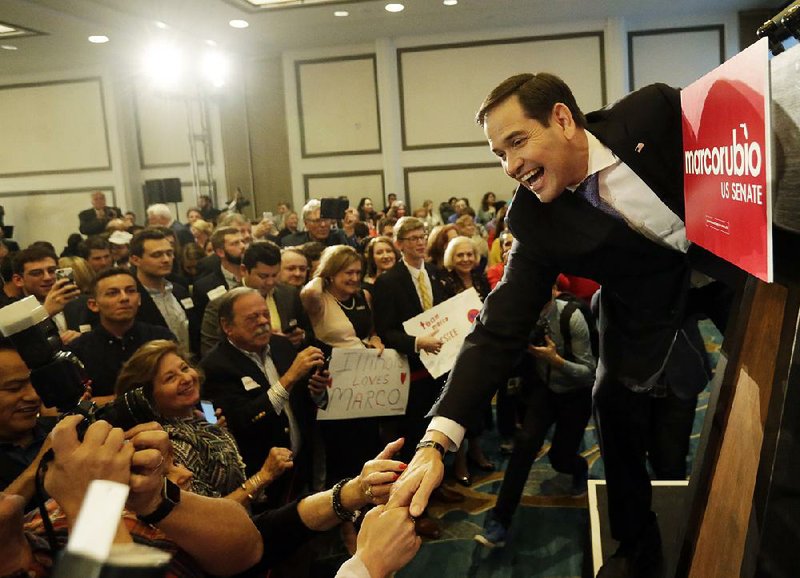 WASHINGTON -- Democrats' chances of retaking the Senate majority were slipping away Tuesday as Republicans hung on to key seats in Wisconsin, North Carolina, Indiana and Florida.

Democrats grabbed a Republican-held seat in Illinois, but the outcome in Wisconsin was a surprise, as both parties had expected it to flip for the Democrats. GOP Sen. Ron Johnson of Wisconsin snagged victory over former Democratic Sen. Russ Feingold.

Races in GOP-held Pennsylvania, New Hampshire and Missouri remained too close to call as Republicans defended a slim 54-46 majority.

As the night wore on Democratic operatives struggled to explain why their optimistic assessments of retaking Senate control were so mistaken. Some were blaming FBI Director James Comey's bombshell announcement that he was reviewing a new batch of emails connected with Democratic presidential nominee Hillary Clinton for breathing life into GOP campaigns.

Senate Republicans, too, had feared they would have a bad night Tuesday, and some were taken by surprise as they racked up win after win.

In North Carolina, Democrats had high hopes of unseating entrenched GOP incumbent Sen. Richard Burr, who infuriated even his own party with his laid-back campaign style. But in the end he had little trouble holding off a challenge from Democrat Deborah Ross, a former state legislator and director of the North Carolina ACLU.

And in Florida, GOP Sen. Marco Rubio handily beat Democratic Rep. Patrick Murphy. The outcome was not unexpected, since Murphy had been abandoned by his own party in the final weeks of the campaign, but polls had tightened heading into Election Day.

In Arizona, meanwhile, GOP Sen. John McCain, at age 80, won his sixth six-year term in quite possibly his final campaign. The 2008 GOP presidential nominee was re-elected without much difficulty, and struck a reflective note ahead of the outcome.

"While as Yogi Berra said, 'I hate to make predictions, especially about the future,' I'm not sure how many more I have in me," McCain said.

Democrats were able to pick up a seat in Illinois, where GOP Sen. Mark Kirk had long been considered the most endangered Republican incumbent. Democratic Rep. Tammy Duckworth, a double-amputee Iraq war veteran, ousted Kirk.

In New York, Sen. Charles Schumer, a Democrats, easily won re-election, striking an optimistic note addressing supporters in Manhattan. "I hope the voters of America will bless us with a Democratic majority in the Senate," he said.

GOP incumbents around the country had faced energized Democratic challengers trying to oust them in costly and caustic battles shadowed every step of the way by the polarizing presidential race between Republican Donald Trump and Clinton.

The GOP retook the majority just two years ago. The controlling party holds the committee chairmanships, sets the legislative agenda and runs investigations. First up is likely to be a nominee to fill the vacancy on the Supreme Court.

In Nevada, Democratic Sen. Harry Reid was retiring after five terms and trying to engineer a Democratic successor in the candidacy of Catherine Cortez Masto. Democrats were optimistic that a strong Hispanic vote, and Republican hopeful Rep. Joe Heck's stumbles with Trump, would keep Nevada in their column.

Throughout the campaign the Senate races provided moments of drama, not least as GOP candidates grappled with sharing a ticket with Trump. That tripped up Sen. Kelly Ayotte in New Hampshire after she asserted at one point that Trump could "absolutely" be a role model for the nation's youth.

In Nevada, Heck ended the campaign refusing to say whether he'd vote for Trump. GOP Sen. Pat Toomey of Pennsylvania, too, kept voters in suspense until the eleventh hour before disclosing late Tuesday that he voted for Trump.

Information for this article was contributed by Mary Clare Jalonick of The Associated Press.