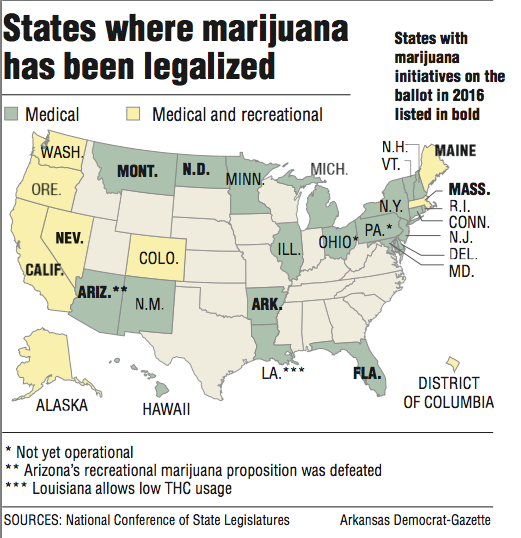 Map showing states where marijuana has been legalized.

A slew of victories for medical marijuana Tuesday night has leaders at all levels of government grappling with conflicting instructions from voters and the federal code.

Voters' approval in Arkansas, Florida, North Dakota and Montana of medical-marijuana ballot measures means that well over half of the states have legalized the medicinal use of the drug, which continues to be illegal in the eyes of the federal government and remains in the most dangerous U.S. Drug Enforcement Administration classification.

President Barack Obama directed the federal government to leave marijuana decisions to the states, despite the law, but neither opponents nor proponents said they were sure where President-elect Donald Trump stands on the issue.

The confusion has Gov. Asa Hutchinson -- a former head of the DEA who campaigned against the Arkansas Medical Marijuana Amendment -- asking the federal government for clarification.

"It's an example of the states innovating in a risky area, and certainly the states are leading on this, but we're to a point that the federal government is going to have to readdress this," he told reporters Wednesday. "This does not call for a state-by-state solution, it calls for ... a national solution."

The governor said the people have spoken, state agencies will put the law into effect and he plans to set aside $3 million to begin implementing the law. Still, unease remains.

"Congress is going to have to address it," Hutchinson said. "I don't like the idea of implementing laws in Arkansas that violate federal law. That is a given. That's where we are. And that's not a good position to be in."

Paul Armentano, deputy director of the National Organization for the Reform of Marijuana Laws, said Congress has been under pressure to change the law for a long time.

But even with the addition of the first two Southern states -- Arkansas and Florida -- to the number of states allowing medical marijuana, he's not sure there's going to be a federal change.

"I would argue when it comes to the question of tipping points or mandates that we passed the tipping point some time ago," Armentano said.

"There has been a mandate for some time to elected officials at the federal level to comport federal policy in a manner that reflects public opinion, reflects scientific consensus, and that reflects the rapidly changing legal and cultural status of marijuana. Whether last night's election will reinforce this mandate remains to be seen," he said.

Neither Hutchinson nor Armentano said they know where Trump stands on medical marijuana.

Armentano said the president-elect made contradictory statements over the course of the presidential campaign and has surrounded himself with marijuana opponents. Trump's campaign did not return a request for comment.

In at least one interview, the Republican said he supported medical marijuana.

"I'm in favor of it 100 percent," Trump said on the O'Reilly Factor in February.

But even if Trump supports medical marijuana, Hutchinson said, the president-elect still needs to pick a path for the federal bureaucracy.

Trump could continue that policy, Hutchinson said. The federal government also could amend its regulations, or the Food and Drug Administration could expedite its review of the drug and set up a federal standard, he said.

Asked if the federal government should just legalize marijuana, the governor said: "No. No. No. I'm saying readdress it."

During the O'Reilly Factor interview, Trump said he needed to further consider the effects of recreational marijuana.

"In Colorado, the book isn't written on it yet, but there is a lot of difficulty in terms of illness and what's going on with the brain and the mind and what it's doing," he said. "So, you know, it's coming out probably over the next year or so. It's going to come out."

On Tuesday, five states voted on legalized recreational use of marijuana. Arizona rejected its measure, but voters in California, Maine, Massachusetts and Nevada approved their measures.

Oregon Democratic Rep. Earl Blumenauer, one of the top backers of legalization in Congress, told a McClatchy News reporter that millions of Americans who backed Trump also supported ending the federal ban on marijuana.

He said the new administration "is going to inherit a landscape unlike any in our history," and he predicted that Trump will not interfere with the states. He said the new president would have difficulty trying to intervene anyway, with polls showing a strong majority of Americans favor ending federal prohibition of the drug.

"Even if we didn't have signals from Donald Trump, the fact is that this is where the public has moved," said Blumenauer, who first promoted legalization as a member of the Oregon Legislature in 1973. "It's not been the politicians who've led on this."

He said he's waiting for answers from state officials.

"Now it comes down to the enacting legislation," Horton said in an interview. "The people have voted that they want to do this, but how to do it is something the Legislature still has to work out, and they'll hand the rules down to us. There's questions about who's going to be able to have a dispensary, where you can have it, workplace rules."

Issue 6 went into effect Wednesday, but state agencies have up to 120 days to come up with rules and regulations governing it.

The Department of Health will issue registry identification cards for patients who have any of 18 medical conditions that qualify for medicinal marijuana use, as defined in the amendment. Conditions include cancer, glaucoma, Tourette syndrome, Alzheimer's disease and hepatitis-C.

The governor, the Senate president pro tempore and the House speaker must appoint five people to a Medical Marijuana Commission.

The commission will begin accepting applications by June 1.

At the local level, cities, counties and incorporated towns are allowed "reasonable zoning regulations applicable to dispensaries or cultivation facilities, provided that those zoning regulations are the same as those for a licensed retail pharmacy," according to the amendment.

Voters can ban cultivation facilities and dispensaries within a city, county or incorporated town in an election.

"It's going to be like the wet-dry issue," Horton said. "It's not the end of the world. It's just how we get it worked out."

He said it's not yet sure whether Issue 6 will help or hurt Russellville's budget. He said he was still coming to grips with the fact that voters passed the measure.

"I'm a high-50s-age guy. This is a monumental change compared to the culture I grew up in," Horton said. "I just don't think anybody has all the answers yet."

Information for this article was contributed by Rob Hotakainen of McClatchy News.