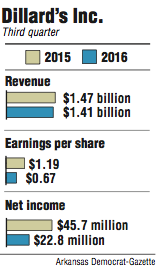 Dillard's Inc. posted a 50 percent drop in profit Thursday as the Little Rock retailer's sales fell in the third quarter.

"As we work through this tough time, we are focused on improving customer experience through attracting and maintaining premium brands while providing exceptional service," he said.

Dillard's said sales declined in all of its retail categories, but were better in home and furniture, junior's and children's apparel, ladies' apparel and men's clothing and accessories.

Dillard's was one of several retailers to release their quarterly financial results Thursday.

Kohl's Corp. reported a increase in third-quarter earnings despite seeing revenue fall 2.3 percent. The company saw profit increase to $146 million from $120 million a year ago.

The company said improved earnings were the result of a strong back-to-school season, along with reduced expenses. Shares of the company soared 11.5 percent to $50.96 on the New York Stock Exchange.

"That helped the whole group," he said. "The whole group ... all the department stores have been under pressure for earnings and sales. The top line has been really stressed for all of these companies."

Macy's Inc.'s earnings missed analysts' estimates for the third quarter, but the company's shares rose after the company said it will partner with Brookfield Asset Management to explore "value creation opportunities" for its real estate.

"Over time, that [retail] space has been costing more and more, and they are getting less and less of turnover and efficient use of that space," Lutts said of Macy's real estate holdings.

Macy's reported a profit of $17 million for the third quarter, down from $118 million in the 2015 period. The results missed Wall Street's estimates. Shares of the company rose 5.6 percent to $40.53 on the New York Stock Exchange.

Macy's partnership with Brookfield comes as the retailer has sought to find value from its real estate holdings and as many of its stores struggle.

"We are reallocating and prioritizing our spending to drive growth, improve the customer experience, increase our agility and deliver strong financial results," Chief Executive Officer Terry Lundgren said in a prepared statement.

"We also are making good progress on our strategies to create shareholder value through our real estate, while preserving our ability to operate as a top retailer with a healthy balance sheet," he said.