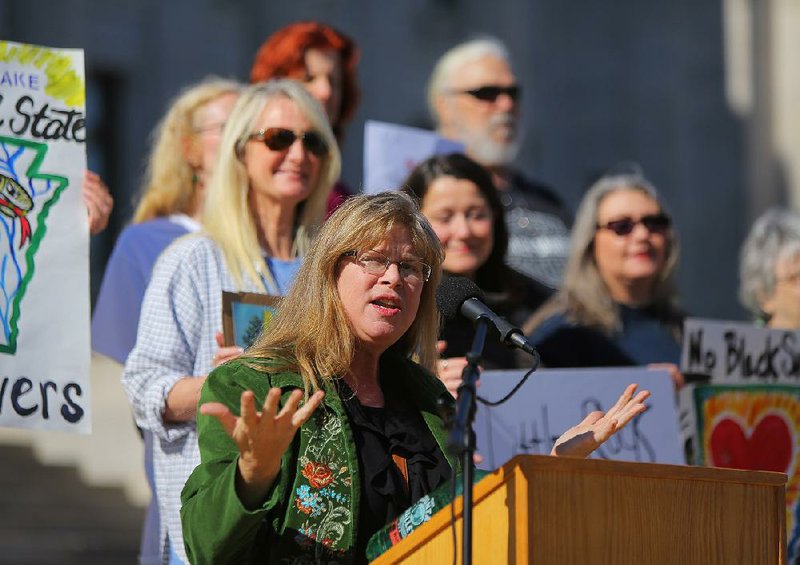 Denise White Parkinson speaks against the Diamond pipeline Tuesday at a rally at the state Capitol. Parkinson organized the event with the Arkansas Renewable Energy Association.

More than a dozen people opposed to the Diamond pipeline, which would cross Arkansas from Oklahoma to Memphis, gathered Tuesday at the state Capitol to call on regulatory agencies to reconsider their permits allowing the $900 million project.

The group said the U.S. Army Corps of Engineers and the state Public Service Commission should re-examine approval of the oil pipeline in light of recent earthquakes in Oklahoma, saying the project places water sources in Arkansas at risk.

The demonstration comes as activists called for rallies nationwide to protest the Dakota Access Pipeline in North Dakota, which has drawn opposition from the Standing Rock Sioux tribe and environmentalists who say the pipeline threatens drinking water and cultural sites.

"Arkansas is a microcosm of this entire scene and situation because we have the Diamond pipeline that is set to cross every aquifer, watershed, and river, creek, bayou and slough between Fort Smith and Memphis," said Denise White Parkinson, who organized the event with the Arkansas Renewable Energy Association. Parkinson wrote Daughter of the White River.

"We are asking today for a review and re-evaluation of the this entire plan because the Diamond pipeline was approved before the current state of earthquake emergency in Oklahoma," she said.

Diamond Pipeline is a joint venture between Plains All American Pipeline and Valero Energy Corp. to build a 440-mile pipeline to move oil from Cushing, Okla., to Valero's refinery in Memphis. A Diamond spokesman said the company did not have time to comment by deadline Tuesday.

The 20-inch pipeline will run across north-central Arkansas and will move crude oil from shale formations in Texas and North Dakota. The pipeline will have a capacity of 200,000 barrels per day. A barrel is equal to 42 gallons.

Some, including the Clarksville's Light and Water utility and the Arkansas Health Department, have expressed concerns that the proposed route of the pipeline threatens drinking-water sources in the state.

Parkinson said Tuesday that the group decided to hold a news conference opposing the Diamond pipeline after reading about the Nov. 6 earthquake near Cushing.

A state of emergency was issued for Payne County, Okla., after the magnitude-5 earthquake, which damaged buildings and was felt in several states, including Arkansas.

Officials said no damage had been reported at Cushing's oil terminal and other oil and gas infrastructure. Cushing is the largest crude-oil hub in North America.

The earthquake hit just months after a magnitude-5.8 temblor in Pawnee, Okla. That earthquake also was felt in several states, including Arkansas.

Oklahoma has been plagued with earthquakes in recent years. The tremors have been tied to wastewater injection wells used by the oil and gas industry.

The Corps of Engineers' Little Rock district examined 491 water crossings on the Diamond pipeline's route, and approved permits for 443 of them in May.

The other crossings either did not need a permit or the agency did not have jurisdiction over them.

The Corps would consider re-evaluating the permits "if additional pertinent information that was not provided in the review was brought to light," Driver said.

"It would have to be significant information for us to go back and re-evaluate," added Cynthia Blansett, environmental protection specialist with the Corps of Engineers.

The Public Service Commission also examined five of those navigable waterways, including the Arkansas, Mississippi, White and St. Francis rivers and the Illinois Bayou.

The agency approved the project Aug. 31 after Diamond Pipeline struck a multimillion-dollar deal with Clarksville Light and Water Co. The city utility provides drinking water to about 28,000 people in Clarksville and surrounding areas.

The deal, which put an end to Clarksville's opposition to the proposed pipeline route, requires Diamond Pipeline to take steps to protect drinking-water sources.

After Clarksville Light and Water withdrew its petition, no one else spoke against the pipeline project during the commission hearing Aug. 18.

"So the commission order is final," he said, adding that he could not comment on Tuesday's demonstration as he was not present for it.

Parkinson, along with others gathered at the Capitol, said they not only worry that the Diamond pipeline places drinking-water sources at risk, but that the project's path also crosses the Trail of Tears multiple times.

After being forced from lands east of the Mississippi River in the late 1830s, American Indians migrated to Oklahoma on what has become known as the Trail of Tears.

"I do have Cherokee blood in me and it offends me to no end going over the Trail of Tears," said Skip Smith, of Little Rock, who spoke at the rally.

"These pipelines have no respect for sacred grounds or history," he said.