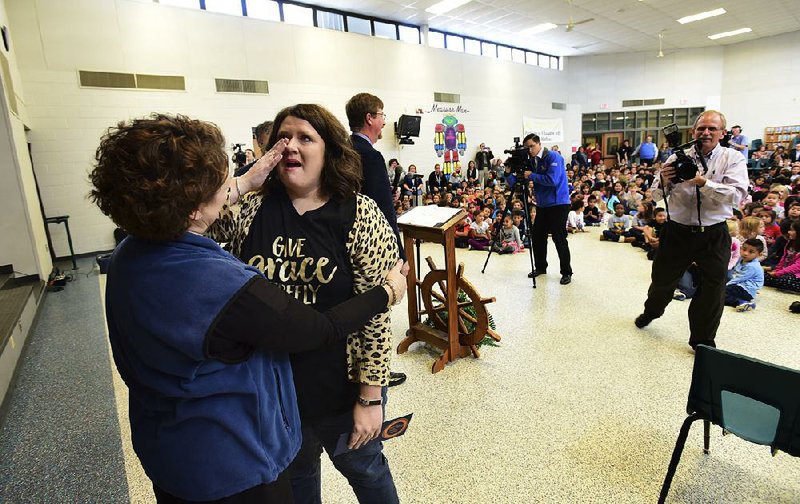 Kara Davis, a fourth-grade teacher at Mathias Elementary School in Rogers, gets a hug from Principal Betsy Kinkade after Davis learned she was one of 35 people in the U.S. to receive this year’s Milken Educator Award.

ROGERS -- Friday was shaping up to be an ordinary day for teacher Kara Davis, right up until her name was called during an assembly at Mathias Elementary School.

That's when Davis learned she'd been chosen as one of this year's Milken Educator Award recipients, an honor that comes with a $25,000 prize. She's one of as many as 35 educators nationwide to receive the award this year.

Kara Davis is the fifth person from the Rogers School District to receive a Milken Educator Award. Here are the rest, along with where they were teaching at the time they won it:

Davis was sitting near the back of the school's cafetorium with her students when Johnny Key, the state's education commissioner, announced her name.

"It's incredible," Davis said. "There's so many amazing teachers that have been a part of my life that are in this district. Teaching is such a great but challenging job, and it feels amazing there are people out there who honor that."

Only a few officials knew in advance the reason for Friday's assembly. Davis said she'd originally been told that a play was going to be put on for the school. Her main concern was the behavior of her students, especially when she realized that attendees included Key and Rogers School District Superintendent Marlin Berry.

"When they called my name, I was just amazed," she said.

Davis dabbed her eyes with a tissue upon making her way to the front of the room. Key said the Arkansas Department of Education "could not be more proud" of her.

"We've talked for the last year or so about making excellence available to all students in the state of Arkansas and working with our teachers, just like Mrs. Davis, to help create those opportunities for you. That's what this is all about," Key said.

The Milken Educator Awards program, an initiative of the Milken Family Foundation, is celebrating its 30th anniversary. Recipients, all in the beginning or middle of their careers, are honored "for what they have achieved and for the promise of what they will accomplish," according to a news release from the awards program.

Davis is the fifth person from the Rogers School District ever to receive the award.

The foundation has distributed about $68 million in recognition of more than 2,700 teachers, principals and specialists over the years. Recipients are free to do what they want with the $25,000 prize. Davis said she and her husband, Aaron, are building a house, so the money will help with that project.

The Milken Educator Awards program has no formal nomination or application process. Candidates are sourced through a confidential selection process, then reviewed by panels appointed by state departments of education, according to the news release. The foundation has final approval on who receives the awards.

Colleagues described Davis as a strong advocate for technology in the classroom. She led a fundraising campaign to bring 1-to-1 computing to her students, and she is involved in a new initiative to revise the school's science, technology, engineering and math curricula.

She keeps up with the latest research and "eagerly implements creative tech concepts and approaches into her classroom," the news release stated.

"She has taken it upon herself to help grow our new teachers," Kinkade said. "You could probably talk to 10 different people here who have been mentored by her. Sometimes it's in an official capacity, and sometimes it's just because that's her heart."

Davis has created a class for first-year teachers. She also serves on the school's parent advisory committee and has facilitated kindergarten parent training.

Natalie Ivers, now in her fourth year of teaching at the school, was mentored by Davis during Ivers' first year on the job.

"She was there for any question I had," Ivers said. "She was there for the good days, the bad days. She was that person I could go to whenever I needed help with behavior issues in my classroom, or dealing with parents or just planning a lesson, just all of those things that come with teaching. I joke that she's my mom here at school."

Kim Dixon, a counselor at Mathias, served as Davis' mentor during Davis' first year. Dixon called Davis a "natural" when it comes to teaching.

"It was satisfying having a teacher I know earn it get recognized for all the millions of hours that she puts in at home, on her personal time as well as the time here in the building," Dixon said. "She never forgets what it felt like to be a kid at this age, and if you can remember that, you can teach anybody."

Returning to her classroom after several interviews, Davis was greeted by her students each holding a yellow rose for her. The students took turns reading notes expressing how they felt about her.

Isaac Tanksley thanked her for helping him become an excellent mathematician.

"And I want to say you are definitely the best teacher I've ever had," Isaac said.

Davis reached her husband by phone shortly after Friday’s assembly to give him the news.