Arkansas 4th in nation in rate of divorces, 2015 data show 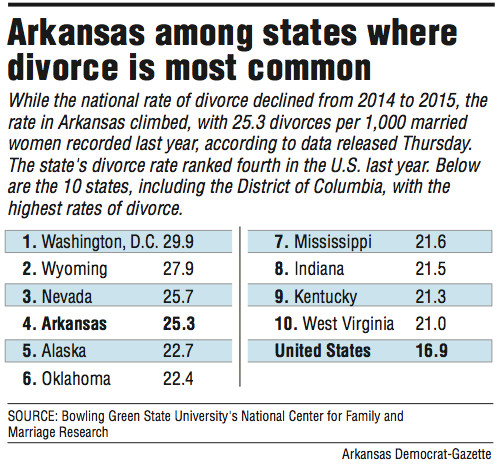 Information about the rate of divorce in The United States

Family law attorneys say more people marry younger in Arkansas than in other states and married couples often have clashing marital expectations, both of which contribute to the state's divorce rate.

Also, attorneys say, they are seeing a higher number of divorces among couples who have been married 30 years or longer.

The impact of divorce stretches beyond the couples themselves. Marriage dissolutions can also harm the psyches of involved children, especially if the youths are thrust in the middle of long-running disputes, attorneys said.

"What you'll find if you look at the studies is that children can handle their parents getting divorced, OK, but what screws kids up is parents who constantly are acrimonious toward each other and fight and fight and fight," said Jack Wagoner III, an attorney who has handled divorce cases for more than 20 years. "That's been shown to have a terrible impact on kids."

Arkansas' rate ticked upward from 22.3 divorces per 1,000 married women in 2014 to 25.3 in 2015, according to Bowling Green State University's National Center for Family and Marriage Research data released Thursday. The national rate dropped from 17.6 to 16.9, the lowest rate in at least 40 years.

Arkansas had the nation's seventh-highest divorce rate in 2014 and fourth-highest in 2015, according to the Bowling Green research, which is based on the U.S. Census Bureau's American Community Survey.

In Pulaski County, the state's largest county, the number of divorce decrees granted rose by 6 percent to 1,785 from 2014 to 2015, according to Douglas DalPorto, supervisor of court records. So far this year, 1,540 divorce decrees have been granted.

Attorney Rebecca Denison, who has handled divorce cases for 27 years, said the specific causes of divorce -- money issues, infidelity or mismatched personalities, for example -- haven't changed, but modern dynamics, like the Internet, are increasing the likelihood of those issues actually fracturing a marriage.

Denison said she's noticed a much higher number of 30-year-plus marriages being terminated, as is the case nationally. Those cases can often center on feelings of "emptiness" that arise after grown children move out of their parents' homes, she said.

"Then they are alone, and [sometimes] they have not built a basis for their marriage that is more than the kids," Denison said.

She said dissatisfied spouses can now easily connect with people online, including people from their pasts, which makes it easier for spousal disconnect to become something more.

"We're seeing a lot of people meeting people on the Internet, reconnecting [with old friends] on Facebook," Denison said. Also, "it seems like sexual addiction and pornography issues are underlining some of the divorce cases."

The fact that Arkansans get married at a higher rate than the national average also contributes to a higher divorce rate, Denison said.

In Arkansas, there were 40 weddings for every 1,000 unmarried women in 2015, ranking the state No. 13 in the nation, according to the Bowling Green research. The national rate of 32.3 remained steady last year, near a 45-year low.

Wagoner said Arkansans are marrying at younger ages than their counterparts in most other states.

"People marry earlier here, which gives them a lot more time to get divorced, for one thing," Wagoner said. "They get in that infatuation period and think they're in love and that trumps everything. They go to the courthouse too quick."

Denison said couples should have frank conversations about marriage before getting into it because expectations as to what it actually means can differ.

"I think people go into it with 'OK, you get married, you have a wedding,'" Denison said. "They're real big on having weddings but not really big on having the same expectations of what a marriage is.

Divorces are in some ways easier, some ways more difficult to obtain in Arkansas than in other states, depending on the circumstances, attorneys said.

Other states, for example, allow no-fault divorces. That means the person seeking the divorce does not have to prove that a spouse did something wrong, such as adultery. Arkansas allows no-fault divorces only after the couples have been separated for a period of at least 18 months, Wagoner said.

Divorces for "general indignities" -- such as a buildup of behavior like rudeness, vulgarity or a host of other intolerable actions over a period of time -- can be completed after a far-shorter, 30-day "cooling-off period," Wagoner said.

State law requires that someone be an Arkansas resident for only 60 days before being able to file for divorce -- a short time compared with most other states -- but it's rare for someone to establish residency in Arkansas solely for that purpose, Wagoner said.

"Few if any children in the United States are emancipated at that age, and many times one parent is left with the expense of supporting the child," Crawford said. "Continued support for the children during their college or early adult years is at the top of my counseling list for parents."

Information for this article was contributed by Bloomberg News.