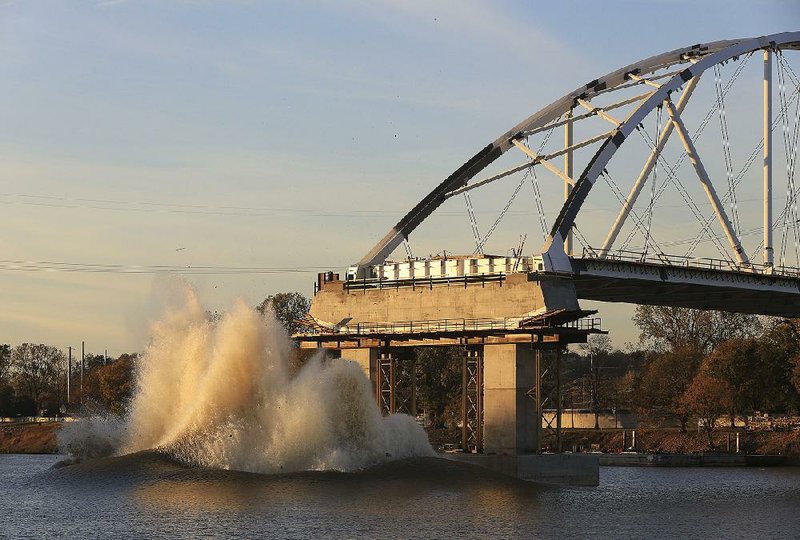 Crews detonate explosives Monday afternoon in an attempt to demolish one of the two remaining footings of the old Broadway Bridge between Little Rock and North Little Rock. ( Staton Breidenthal)

Explosives used to remove one of the two remaining footings of the old Broadway Bridge failed to do their job Monday, forcing the contractor to postpone today's operation to move the second and final arch into place for the new Arkansas River crossing.

Explosives drilled into the northernmost footing left from the 93-year-old Arkansas River crossing were detonated at 4:34 p.m. and appeared to be successful as the concrete structure -- much of it underwater -- disappeared from view.

But a post-blast review of the underwater debris pile showed that a certain amount of the concrete structure remained intact, said Danny Straessle, a spokesman for the Arkansas Highway and Transportation Department.

What remains of the footing also is in an area that will be part of a wider navigation channel for barges and other river traffic, Straessle said.

The operation to float the arch will be rescheduled and likely take place after Thanksgiving, he said.

The contractor for the $98.4 million project to replace the 93-year-old bridge, Massman Construction Co. of Kansas City, Mo., made the decision to scuttle today's operation at 8 p.m., according to Straessle.

"Massman is meeting with the demolition contractor to figure out a way to remove the structure, all of which is underwater," he said.

The explosives had been scheduled to detonate at 4 p.m., but shortly before that time, towboats were still moving several construction barges away from the blast site near the foot of the south end of the arch that was floated into place last week.

Onlookers waiting to view the blast appeared fewer than had gathered to watch the previous steps construction project. Monday's throng included Bobby Walker, 58, of Little Rock, who stood perched on the Main Street Bridge and recorded the event with his digital camera. He also was present when the first arch was floated into place.

"I am here to see history made in Little Rock," he said. "I've not seen something like this in my life. It's been a great experience."

The Arkansas Highway and Transportation Department could not say Monday when the second footing that supported the steel arch section of the old bridge would be removed.

Monday was Day 52 in the six-month project to replace the bridge and reopen it to traffic. An estimated 25,000 vehicles used the old bridge each day to cross the Arkansas River. The project's six-month timetable officially began Oct. 1.

Massman was awarded the contract in September 2014. Initial work on the project began in January 2015, with much of it building the new piers in the river.

Under the terms of the contract, Massman is required to close the old bridge, build the new one and open it to traffic on or before March 29 or risk incurring disincentive payments of $80,000 per day. The company will be paid $80,000 for every day the project finishes early, but those payments are capped at 50 days.

The Highway and Transportation Department originally proposed a Broadway Bridge design that's similar to the Main Street Bridge, but local leaders persuaded the department to incorporate two basket-handle arches into the design. Pulaski County committed $20 million to cover the extra cost. Local leaders say the basket-handle span will become a distinctive landmark in the region.