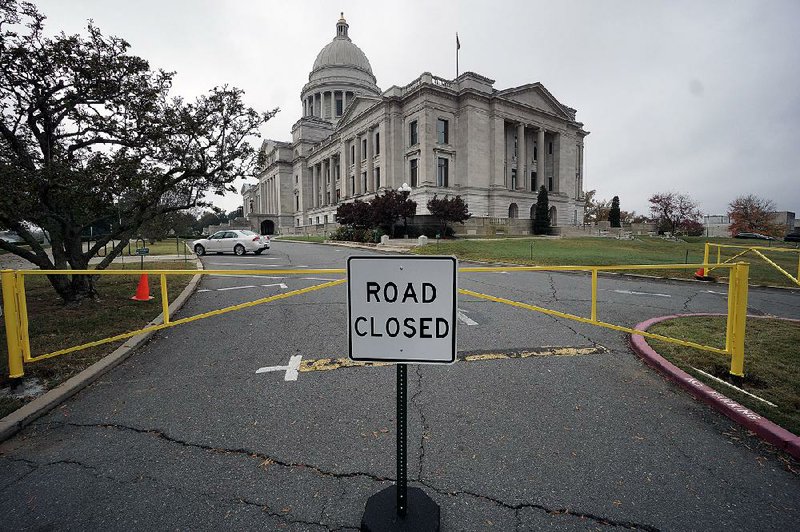 A new sign and gates block the eastern driveway at the state Capitol on Sunday. The secretary of state’s office, which maintains the building and grounds, said the driveway will be closed on weekends to prevent parking and through traffic. The building remains open to weekend visitors.

A year after bowing to criticism of his decision to close the state Capitol on weekends, Secretary of State Mark Martin's office said Monday that it will address security concerns by using gates to block weekend traffic near the 101-year-old building. 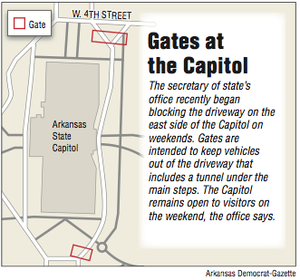 Three yellow metal gates were installed last week at the north and south entrances of the driveway leading up to the tunnel where the governor and many lawmakers can often be seen coming and going from their offices. The driveway also contains dozens of parking spaces that are reserved for legislators and constitutional officers during the work week.

While drive-up access to the front of the building will be limited, the secretary of state's office, which oversees operations at the Capitol, has no plans to close the building to the public on Saturdays and Sundays, said Martin's spokesman, Chris Powell.

The west driveway to the building, which is not as close to the facade, does not have gates at its entrances.

The building will remain open to the public during its normal weekend hours from 10 a.m. to 3 p.m., Powell said. Public access to the building also is allowed between 9 a.m. and 5 p.m. on weekdays.

The locking gates will prevent parking and through traffic on the east-side driveway on weekends, holidays and during emergencies, Powell said. They also appear to be easily dismantled. A reporter observed the gates closed over the Thanksgiving weekend, but on Monday they had been disassembled and removed as heavy rain bubbled up in puddles from the post holes.

"It is just going to be used to prevent the close proximity of vehicles on the weekend," said State Capitol Police Chief Darrell Hedden.

Asked what type of vehicles the gates were meant to deter, Hedden said, "All of them."

"You wouldn't want to try to run your car through them," Hedden said.

However, the plan was scrapped after the building was closed for just one week in January and Gov. Asa Hutchinson's office raised concerns with Martin over the loss of public access, the Arkansas Democrat-Gazette previously reported.

During the holiday season, the building plays host to school groups and tourists who come to see the Capitol rotunda festooned with wreaths, garland and large banners centered around a 25-foot-tall artificial Christmas tree lit with 8,415 LED bulbs.

Hutchinson's concerns lay with the public's access to the "people's building," a spokesman said Monday. The governor is not opposed to the gates, so long as the public is aware they can still visit the building, the spokesman said.

No threats have been made against the building in the past year, according to Hedden, and Powell said the secretary of state's office was not acting in response to any incident or threat.

House Speaker Jeremy Gillam, R-Judsonia, said talk of adding gates dates back to his days as chairman of the House Management Committee between 2013 and 2014. But Gillam said Monday that he hadn't been involved in more recent discussions about installing gates and had no opinion about them. Senate President Pro Tempore Jonathan Dismang, R-Searcy, did not respond to a phone call Monday.

According to Powell, the construction of the gates cost $16,500 and involved laying a foundation as well as engineering, painting and installation.

Security concerns in the wake of the Sept. 11, 2001, terrorist attacks against the country led to the closure of the state Capitol's Tiffany & Co. bronze doors atop the front steps. The building was completed in 1915.

Metal detectors also were installed in the aftermath of the attacks and later moved closer to the east entrance, which is located adjacent to the tunnel now blocked from weekend vehicle traffic.

"There's always a concern, that's why we have a Capitol Police force," Powell said. "Some of it is just a practical matter of traffic moving through the area at various times."

Hedden said the Capitol Police has 23 full-time officers who work in shifts patrolling the grounds and guarding entrances. Fewer officers work on weekends, Hedden said, but he declined to say how many.

"We can watch things more closely, have more eyes on the scene Monday to Friday," Hedden said.

According to Powell, no further security changes regarding public access at the Capitol are expected in the near future.