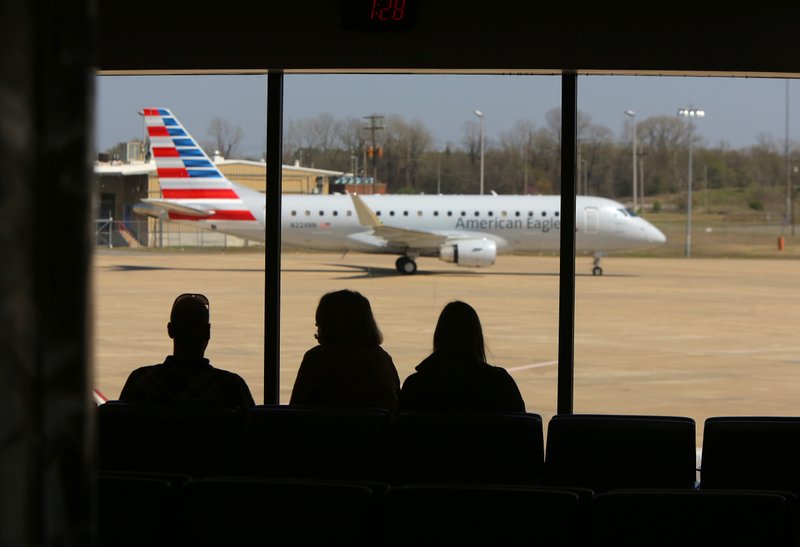 Passengers wait in the gate area of Bill and Hillary Clinton National Airport as an American Eagle plane taxis to its gate. ( Stephen B. Thornton)

An Arkansas state senator is entertaining possible legislation that would change the name of Little Rock’s airport, erasing Bill and Hillary Clinton's names from it.

“Would you support a bill removing the names of Bill & Hillary Clinton from the Little Rock Airport?” Sen. Jason Rapert wrote on Twitter on Monday night. “Arkansas does not support them.”

The tweet included a poll so users could vote for or against deleting the Clintons from Bill and Hillary Clinton National Airport/Adams Field. As of 2:05 p.m. Tuesday, 53 percent of those who voted opposed removing the names. By 8:30 p.m., 67 percent of more than 1,800 respondents were against removing the names. Any Twitter user not blocked by Rapert’s account can vote in the poll.

Rapert on Tuesday said he tweeted the poll to get feedback from constituents. He said one of his colleagues in the Senate is considering a bill that would rename the airport. Rapert, a Republican representing District 35, declined to identify the colleague, saying the senator wasn’t “ready to step out on it.”

Constituents have told Rapert in recent months that they didn’t like the Clintons’ names on the state’s largest airport. He cited the couple’s scandals, including President Bill Clinton’s impeachment and Hillary Clinton’s secret email server, as reasons why some Arkansans want their names stricken from the airport.

“You don’t want the people of Arkansas unhappy with the gateway to the state,” he said.

Should the Arkansas legislature attempt to pass a bill to remove the Clintons' names from the Little Rock airport?

[EMAIL UPDATES: Sign up for free breaking news alerts and other email updates]

After asking the public for its comments, the Little Rock Municipal Airport Commission voted unanimously in 2012 to name the airport after the Clintons. The former president and former secretary of state attended the airport’s dedication a year later.

An airport spokesman didn’t immediately respond to a request for comment Tuesday afternoon.

Adams, an officer in the Arkansas National Guard, helped the airport expand while serving on the Little Rock City Council. According to the airport’s website, he was killed Sept. 4, 1937, “in the line of duty.”

“It should be back as it’s always been — Adams Field,” Rapert said.

The responses on Twitter were mixed. Some people applauded the idea of a change while others urged Rapert to spend time on issues more important to the lives of Arkansans.

Responding to the critics, the senator said the poll only took 30 seconds to create and he can “walk and chew gum at the same time.”

Rapert also hoped the airport commission would “take the initiative” and change the name itself. If not, a bill passed by the General Assembly and signed into law could force the alteration, he said.

He had “no idea” if such a bill would pass, but he said GOP majorities in both house and Republican Gov. Asa Hutchinson could be open to it. He also noted Hillary Clinton’s poor showing in Arkansas as the Democratic presidential nominee earlier this month.

“I think we know what public opinion means,” he said.