True to the blues

King Biscuit Blues Festival opener Bobby Rush says his love for the form of honest-to-goodness music keeps him going at 82 by Shea Stewart | October 2, 2016 at 2:08 a.m. 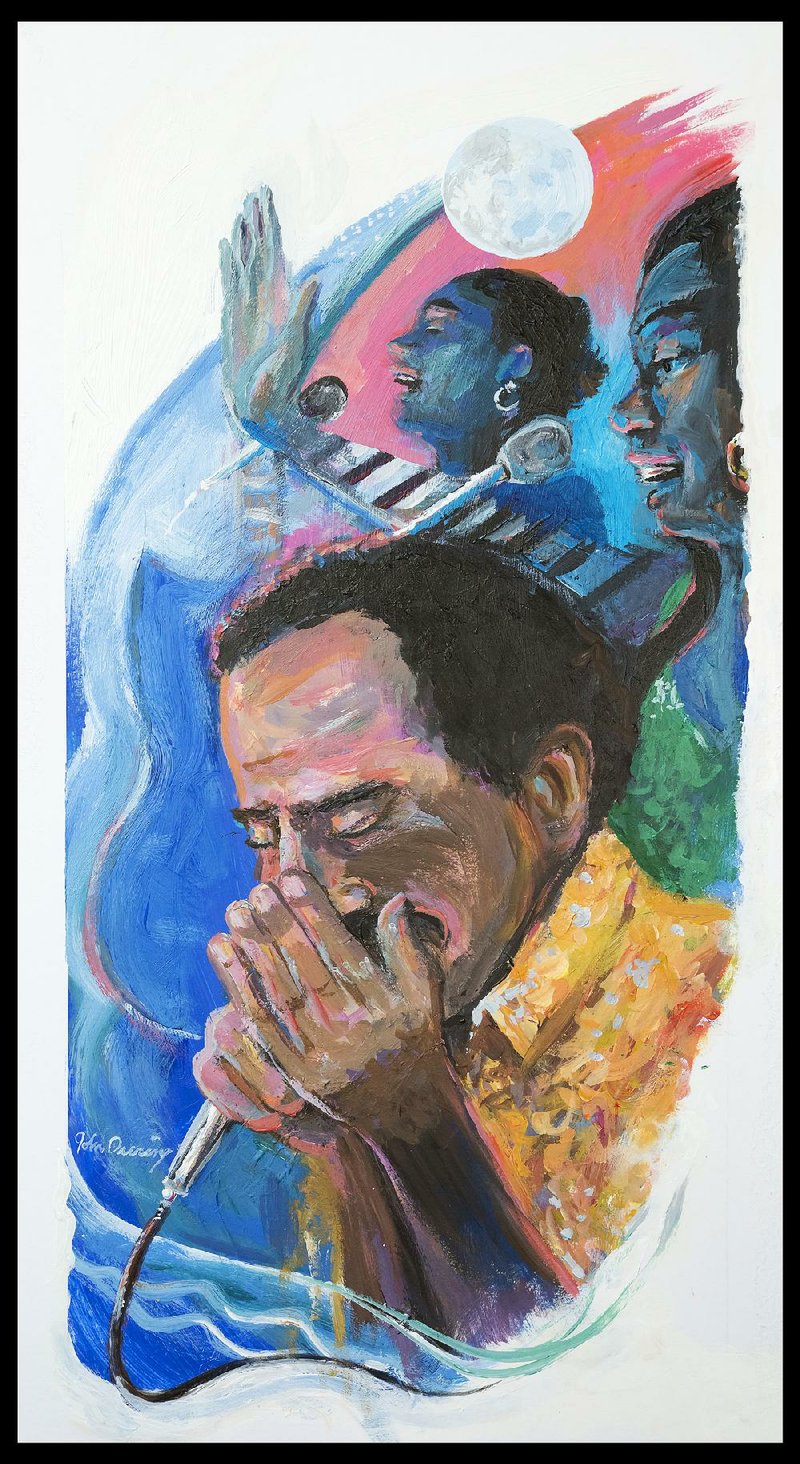 The blues is truthfulness. 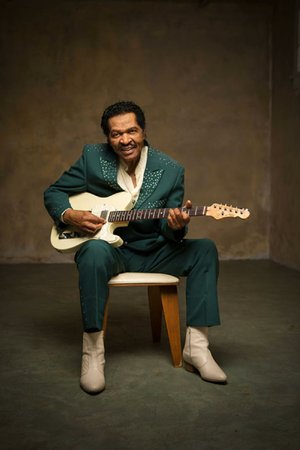 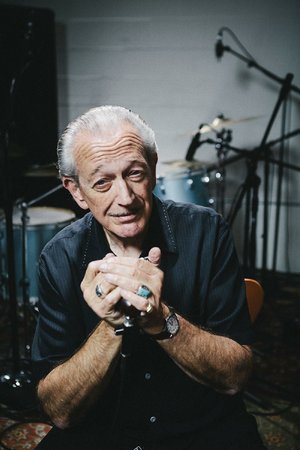 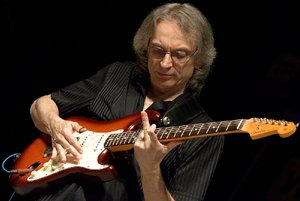 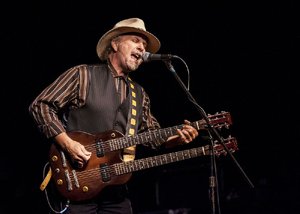 Photo by Courtesy of King Biscuit Blues Festival
A native of California, Roy Rogers played with John Lee Hooker and is known as a master of the slide guitar. He plays with Sonny Landreth on Thursday night.

So says Bobby Rush, who, at 82, is one of the last original bluesmen standing.

It's up to the blues artist to provide that honesty, says Rush, who learned the music growing up in the '30s and '40s in north Louisiana and southeast Arkansas.

"Be true. It may not hit everyone, but even if it didn't happen to you, you can understand it and relate to it."

And it's Rush's version of the truth that will kick off the 31st annual King Biscuit Blues Festival on Wednesday in downtown Helena-West Helena. After his performance comes three days -- Thursday through Saturday -- of honest blues music along the Mississippi River, a mass of swirling brown water that has long flowed with the music.

"The festival is just a showcase of the authentic blues," says Munnie Jordan, executive director of the festival, which started in 1986. "We like to be true to the genre of the blues. We like to keep our niche as a blues festival. ... We don't ever want to lose our purpose and our roots, what we are a part of, which is authentic blues."

Rush delivers an interpretation of blues that is half tent revival in the boondocks and half backroom of a big city bar, a Delta hootenanny meets metropolitan excess. His hypersexual blues, filled with R&B, soul, funk and rock 'n' roll, is not thinking man's music. It's hip-moving music. Get down, throw worries away and dance, just dance.

And if the music of this Louisiana-born, electric-boogaloo musician doesn't get one going, his shake dancers certainly will. Their jerking and shaking from the stage as Rush bares his soul are the conductor's wand of a Rush show, guiding music and audience together as one in this joyous occasion that is laced with bawdy humor.

Rush is an old hand at the blues, but his music and his show never get stale. Instead, Rush is always using both to celebrate not just the blues but also life. His newest celebration is his latest record, the 12-track Porcupine Meat, released Sept. 16 on Rounder Records.

"I'm just enthused, still working and still doing what I do," says Rush, who got his start in long-gone juke joints and clubs in Arkansas. "As long as I feel good I'm going to keep doing it. As long as God gives me strength and keeps my mind focused."

Rush's blues will be followed by other variations of the genre, like the slide guitar mastery of Sonny Landreth, the Thursday night headliner and a musician whose blues include a hint of zydeco, the blues' south Louisiana brother.

For the Friday headliner there's the barn-burning yet gentlemanly blues rock of John Mayall, an English singer, guitarist and organist whose sidemen have included such musicians as Eric Clapton, Mick Taylor, Jack Bruce, Paul Butterfield and three guys who later founded Fleetwood Mac: Peter Green, Mick Fleetwood and John McVie (though McVie was a few months behind).

Closing out the festival on Saturday night is the electrified harmonica blues of Charlie Musselwhite, a Mississippi man who got started playing the Chicago blues.

In all, the festival is more than 60 musicians across five stages and nearly 50 hours of concurrent music.

"If you come to this festival and don't have a good time, man, it's your own fault," says Bubba Sullivan, the owner of Bubba's Blues Corner in downtown Helena-West Helena. "It's a little bit of something for everybody. It's a very unique experience."

Sullivan has been involved with the festival since he helped start it in 1986. Every year he attends, and every year he walks away after the festival knowing he has seen some of the best blues music around.

Gales is similar to Jimi Hendrix, Sullivan says, performing a form of the blues scorched with white-hot guitar theatrics. "I think he's going to blow people away," Sullivan says of Gales, who plays the Main Stage at 7 p.m. Thursday.

And, of course, Sullivan is ready to see his old friend Rush, who headlined the festival last year and has played it several times over the decades.

"If you haven't seen [a Rush performance] -- I've probably seen it 50 times and it's something a little different every time that I see it -- he's got such a feel for the crowd," Sullivan says. "He makes everybody feel like they're special. He's a great guy. He's got that new CD out called Porcupine Meat. Only Bobby Rush would have a title like that."

Rush, born Emmet Ellis Jr. in Homer, La., in 1933, learned the blues from his father, a pastor in north Louisiana and south Arkansas. When the family moved to Pine Bluff in the 1940s, Rush started playing the blues.

"I was really drawn to stories and my first love of playing was my Daddy. And then it was Louis Jordan," he says, mentioning he was entranced by the Arkansas native's version of "Straighten Up and Fly Right."

Later in the 1950s, Rush moved to Chicago, where he learned more from such fellow blues legends as Muddy Waters, Howlin' Wolf and Jimmy Reed.

In 1971, Rush's artistry and hard work paid off when he recorded his first hit, "Chicken Heads." He moved to Jackson, Miss., in 1983 and since then has released album after album, earning three Grammy nominations as well as 10 Blues Music Awards. He was inducted into the Blues Hall of Fame in Memphis in 2006.

Over the years Rush has perfected his live show, too, picking up "this funky kind of thing like James Brown" and curating his live show with bits of Sammy Davis Jr. and Broadway, too. Still, the two biggest influences on a Rush live show, he says, are the preaching style of his father and Rush's own translation of the live show of Cab Calloway, the big bandleader and jazz singer whose shows were a sensation during the 1930s and '40s.

In all, Rush's blues career is 64 years of the truth, across some 277 recordings and countless live appearances. He's still at it.

"Most guys my age start repeating what other people do," Rush says. "They'll be singing 'Hoochie Coochie Man' to 'Sweet Home Chicago' forever. There's nothing wrong with those songs, but we as a people should always try to create and take it to another level and keep things going strong in your life.

"I'm mixed up in all of this. I love Louis Jordan and I also love B.B. King. I also love Prince and I also love Snoop Dogg. I'm not saying everything they do, especially the rap stuff, but I respect it. And I'm still learning from a lot of areas in life."

Porcupine Meat is so titled after a lyric from the title track, "It's like porcupine meat. Too fat to eat; too lean to throw away."

It's an old saying, Rush says, but a bit of truth people can relate to. "It's like you're in love with someone that don't love you, yet you can't turn them loose because what they do to you is so nice. They ain't good for you, but, hell, they good to you.

The swamp blues track, filled with sensuous Fender Rhodes piano and Rush's rich harmonica playing, follows the album's lead-off track, the swamp rocker "I Don't Want Nobody Hanging Around." All 12 tracks were recorded earlier this spring at The Parlor Recording Studio in New Orleans, a studio used in the past by the likes of The Rolling Stones, T-Bone Burnett, Trombone Shorty and Galactic.

The complete album is an exhibit of what the blues can be in the hands of a master such as Rush. There's the injustice blues of "Got Me Accused," the big-city electric blues of "I Think Your Dress Is Too Short" and guest appearances by Joe Bonamassa, Dave Alvin and Keb' Mo'.

Rush is proud of Porcupine Meat, saying "you can tell when you got a hit record," but he's prouder still that he gets to go out and perform the music he loves to adoring audiences. Even at 82, Rush is going strong, playing more than 200 shows a year, from clubs and theaters to festivals.

And while Rush's career has taken him out of the South -- his early years of touring earned him the title of "King of the Chitlin' Circuit" -- and around the world, he's always happy coming back "home" to the King Biscuit Blues Festival.

"King Biscuit has let me be myself," Rush says. "When I say 'be myself,' I have crossed over with a white audience, but I haven't crossed out the black audience. There are many artists who have crossed over and crossed out. I've been so blessed to cross over. I got one foot over here and one over here. Man, I'm loved from both sides of the fence. I don't know where it comes from. I'm just thanking God for it."

Print Headline: True to the blues