Once again, turkeys will fall at Arkansas festival, and it's legal 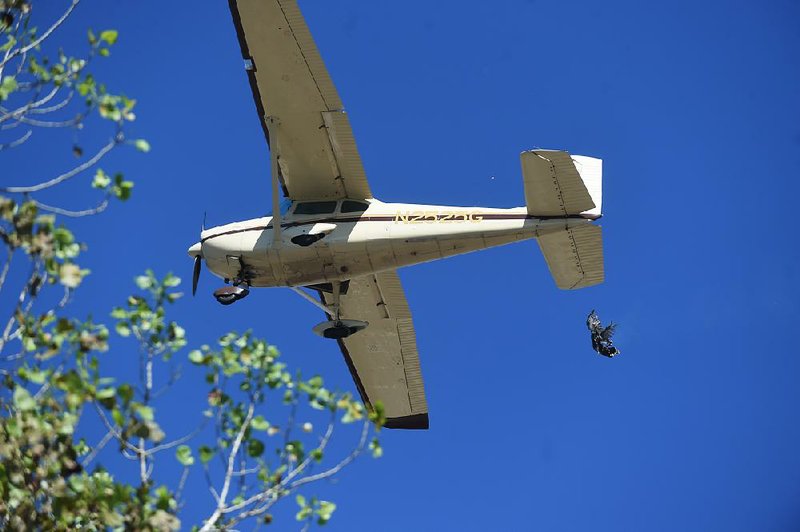 A live turkey falls from a plane during last year’s Turkey Trot festival in Yellville in Marion County. The event has been criticized by animal-welfare activists, but proponents say it’s an Ozark Mountain tradition. (Special to the Democrat-Gazette/The Baxter Bulletin / KAITLYN SCHWERS )

Wild turkeys will be dropped from an airplane at Yellville's annual Turkey Trot festival Friday and Saturday, said Terry Ott, the county judge of Marion County. 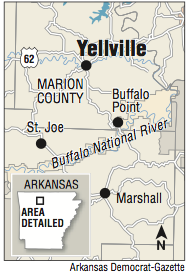 Photo by Arkansas Democrat-Gazette
A map showing the location of Yellville.

"They're not going to crash," Ott said. "They're birds. They can fly."

But turkeys won't be released directly over the crowd, said Dana Woods, who for years was known to festivalgoers as "The Phantom Pilot."

For about 15 years, Woods flew his single-engine 1959 Cessna 182B past the festival while two of his cousins tossed turkeys from the plane.

"We fly up Crooked Creek," Woods said. "We don't fly over the crowds. Safety's first."

Crooked Creek is about two blocks south of the downtown Yellville square. The creek is flanked by fields.

Woods, a Mountain View alderman and former president of the Arkansas Pharmacists Association, prefers the word "release" to "drop" because the birds fly, he said.

Woods said the turkeys glide to a landing. Then they're chased by children and adults alike. The birds that are caught are displayed like hunting trophies on social media. Many of them become pets, or dinner during the holidays.

Turkey Trot is an Ozark Mountain tradition, Woods said. The festival, which started in 1946, features vendors, music and clogging. The Mid-Marion County Rotary Parade will be at 10 a.m. Saturday.

"This event is important to the community," Woods said. "It brings in a lot of money."

The world's largest animal-welfare organization has complained loudly for years about the turkey drop.

Gemma Vaughan, an animal-cruelty caseworker with People for the Ethical Treatment of Animals, or PETA, said the "turkey drop is a throwback to a sorry time when human beings were bone ignorant of animals' feelings."

"But today, there's no excuse for yahoos to pretend that they don't know they're engaging in acts of cruelty that shame them and set a lousy example for their kids," Vaughan said. "PETA is offering a reward of up to $5,000 for information leading to the arrest and conviction of any participant for a violation of law, including the destruction of personal property, as a turkey plummets to the ground. Just like dogs and cats, turkeys feel love and happiness, pain and fear. The use of live animals in this event makes Yellville seem as backward as you can get."

The Federal Aviation Administration investigated Woods last year after a dozen turkeys were seen leaving his plane and "flying" in different directions in the festival vicinity.

Woods had remained somewhat anonymous for many years, but the identification number on his plane was clearly visible in photographs last year.

"The FAA sent me a scathing letter last year," Woods said. "I told them I didn't do all that stuff."

Woods said he met with an FAA investigator who told him the flyovers are OK because the birds aren't being released directly over the crowd.

"I do not violate FAA regulations," Woods said.

He noted that an FAA investigator also talked with him about the flyovers five or six years ago.

Lynn Lunsford, a spokesman for the FAA in Fort Worth, said it's legal to drop objects from airplanes as long as they don't damage people or property on the ground. In some rural areas, newspapers are delivered by plane, he said.

"We don't endorse the practice of heaving unsuspecting turkeys out of aircraft for entertainment purposes, but our regulations don't specifically exclude live animals as 'objects,'" he said in an email. "State and local animal cruelty laws would cover any alleged abuse."

Lunsford said an investigator will be at the Turkey Trot festival this week to observe the flyovers and make sure no birds "accidentally escape" over downtown.

For more than 50 years, the festival included a flyover turkey drop. But after a flap with the FAA and complaints from animal-welfare groups, the plane drops weren't held from 2012-14.

Woods said the hiatus wasn't because of outside pressure. One year, he had a mechanical problem with the plane. Another year, fishing and fog interfered.

During the hiatus, turkeys were dropped from the roof of the Marion County Courthouse or from a stage in front of the courthouse. But the excitement level just wasn't the same as with the flyovers. Attendance at the festival plummeted to about half of what it had been, according to the Yellville Area Chamber of Commerce, which sponsors the festival but not the flyovers. Attendance was back up last year.

Whether wild turkeys can fly has been a central issue of the turkey-drop debate, which received more attention after a 1978 episode of the television show WKRP in Cincinnati in which turkeys were dropped from a helicopter as a Thanksgiving promotion.

"The turkeys are hitting the ground like sacks of wet cement," said Richard Sanders, who played WKRP newsman Les Nessman on the TV show.

"Wild turkeys are strong fliers," Hutchings said. "They are really built more for short, rapid flight. Most of the time continuous wing-beats would not continue more than a couple hundred yards, but they tend to glide intermittently and when they do, can sail for a mile or more. I believe flying speeds can be as fast as 55 miles per hour."

Yvonne Vizzier Thaxton, a professor of poultry science at the University of Arkansas at Fayetteville, said wild turkeys stay at an altitude of less than 100 feet.

During the flyovers, turkeys are dropped from at least 500 feet, said Woods, citing FAA altitude regulations.

"You don't want to be so low that the birds don't have time to orient themselves and fly," he said.

But the plane ride alone would be stressful for the turkeys, Thaxton said.

"Placing turkeys in an environment that is new to them is stressful," she said. "In the case of an airplane, the noise would also be a stress-producing fear reaction.

"Dropping one from 500 feet is a horrific act of abuse. There is no justification for this practice."

Print Headline: Once again, turkeys will fall, and it's legal