Doug the deer captured, will be relocated from Siloam Springs 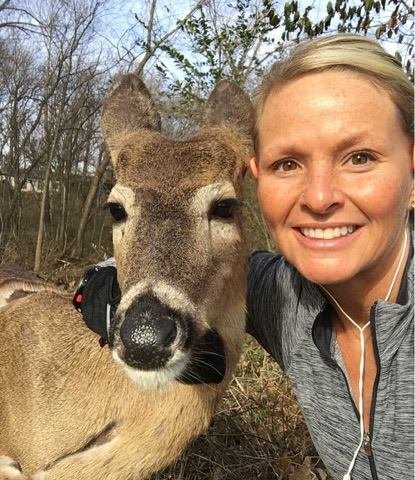 He will be relocated to an undisclosed location on remote public land, commission spokesman Keith Stephens said.

"We want to make sure he's healthy," Stephens said.

A previous version of this story misstated Keith Stephens' last name. The error has been corrected.

University students, trail-goers and neighbors have been taking selfies, feeding and petting Doug since he started showing up around late December or early January. He has more than 2,000 friends on Facebook as Doug Deer.

The deer somehow had lost his fear of humans, which can become an issue as it gets closer to mating season and male deer tend to become aggressive, said Randy Zellers, assistant spokesman for the commission.

Being removed also is better for Doug, who, Zellers reiterated, is a wild animal.

"The deer is better off in the wild not being fed Cheetos and grapes," he said.

Only the commission and Doug know the location of his new home.

"We’re not going to disclose where they release him on public land because someone might go back and want to bring him back or an unethical hunter might go there and have an easy target," Zellers said.

"I think he was fine in his area," she said. "He had a wooded area with a creek. He doesn’t normally get out where cars are, and he was not a danger to people at all."

A group of upset community members gathered Wednesday morning when Game and Fish crews initially tried to capture Doug. He escaped into the woods.

University officials contacted the commission to see if Doug's frequent interaction with the public posed a safety risk.

"We are not deer experts, so we trust the expertise of AGFC that this deer could harm a student or visitor to campus," a post on the John Brown University Facebook page reads.

People throughout the community expressed their displeasure about Doug's departure online.

"@ARGameandFish if I get 250 retweets will you bring Doug back?" Twitter user @JohnCSalley asked the commission Thursday morning.

The commission replied, "wish it were that easy."