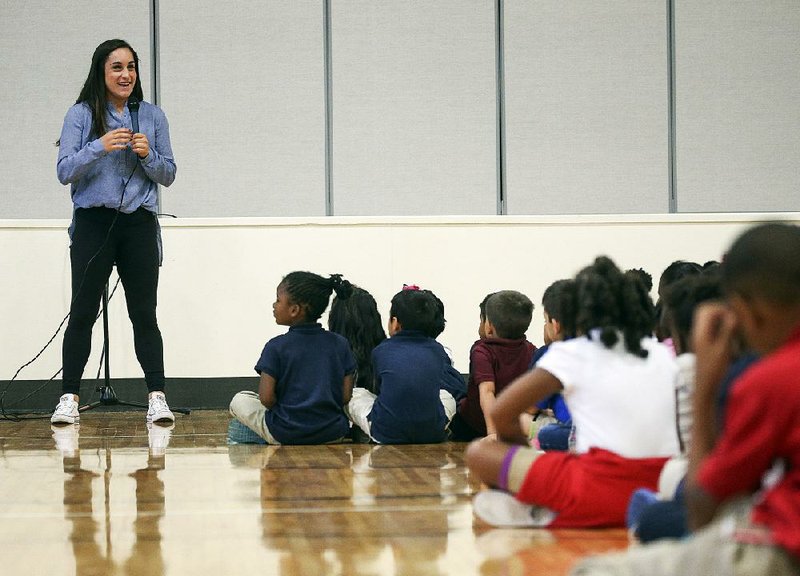 Olympic gold medalist Jordyn Wieber, who competed on the US Gymnastics Team in the 2012 London Olympics, participates in a question and answer session with students at Ridege Road Elementary School in North Little Rock. The Kellogg’s Tour of Gymnastics Champions, which visited North Little Rock’s Verizon Arena on Wednesday, features Wieber and other US Olympic Men's and Women's Gymnastic Team members at Verizon Arena. ( Benjamin Krain)

It was tough to decide where to even look during the Kellogg's Tour of Gymnastics Champions, which visited North Little Rock's Verizon Arena on Wednesday. So much was happening during the fast-paced show, it was easy to miss something.

But the audience of 4,476 was well-aware of every move made by Olympic gold medalists Simone Biles and Gabby Douglas. Near-deafening cheers came forth when the two so much as appeared in the videos that were the show's backdrop. Predictably, the crowd was made up largely of girls from toddler age to preteen.

They and their fellow athletes layered abbreviated performances during the two-part show, which married flashy dance numbers (helped along by actor-dancer Jaymz Tuaileva) with gymnastics to a soundtrack of popular tunes. There were a few stumbles and falls from balance beams and parallel bars. But this wasn't the Olympics; there were no point deductions.

The gymnasts were notably conservative with their moves, especially dismounts, during most of the show. The exception was Biles, who did the move named for her during a repeat of her spectacular floor routine. Others' more daring flips came only during the athletes' colorful, no-holds-barred finale.

Other memorable moments of the show came with Dooley and Ahsinger's synchronized trampoline routine; the group performances of the men gymnasts, including a skillful routine by a trio on the rings; performances by Olympic rhythmic-gymnast twins Jenny and Monica Rokhman; intricate, sensuous performances by Williams and Osborne; and a "yin-yang" dance routine featuring Johnson and Liukin, the former edgy in black and the latter balletic in white.