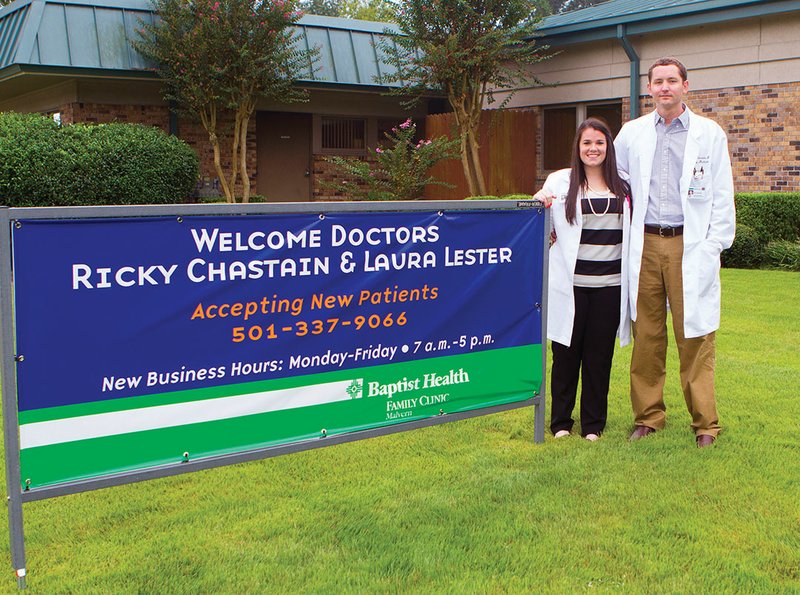 MALVERN — A family-practice physician and his wife, who is also a physician, have returned to his Malvern roots to care for the community at the Baptist Health Family Clinic. Together, the couple are set to meet the medical-care needs of Malvern and surrounding areas.

“This is the first time I’ve had the privilege of adding a husband-and-wife physician team,” said Sheila Williams, vice president and administrator for Hot Spring County’s Baptist Health.

Both had childhood aspirations of becoming physicians, but they didn’t meet until their residencies in Fayetteville after each went to medical schools outside the U.S. He attended American University of the Caribbean, and she graduated from Ross University School of Medicine in the Dominica, West Indies. Lester grew up in Texarkana, Texas.

Growing up, Chastain said he looked up to his family physician, Dr. Ray Bollen. “I always liked science growing up, so medicine seemed like the right career for me,” Chastain said.

“I have had the privilege of watching Dr. Chastain mature into a fine young man, become an outstanding physician and ultimately marry a lovely woman,” Bollen said. “I am pleased that he and his wife have chosen to return to his childhood community to provide the excellent medical care that Malvern and the surrounding area needs.”

Chastain said his biggest overall influence has been his parents.

“They always encouraged my brothers and me to work hard and set our goals high,” Chastain said. “We always felt loved. Dad also told us that if we didn’t make it in school, we’d have to come home and haul hay. We all went to school.”

For a brief time during college at Henderson State University in Arkadelphia, Chastain got a taste of another profession. He worked for three months as a beekeeper with apiarist Autry Hightower and said he’s in the process of obtaining his own beehive.

Lester said she was frequently sick as a child and would often visit the doctor.

“I became enamored with the medical field and even more so when I went to the doctor with my PaPaw,” she said.

She started college at the University of Arkansas at Fayetteville with intentions of becoming a nurse.

“I got waitlisted at the U of A nursing school, and my grandfather said, ‘What are you doing? Shoot for medical school. You can do it.’”

Lester’s parents and brothers also played an integral role in her positive life path, she said.

“They are so loving and supportive but also make me tough.” When faced with a challenge, she said, she remembers her mother’s advice.

“I know my mom didn’t come up with the saying, ‘Everything happens for a reason,’ but she really makes me believe it when I face adversity or get frustrated when things don’t go my way,” Lester said.

Lester and Chastain moved to Malvern with their dog, Dixie, and said they think they can make an impact there. Northwest Arkansas is saturated with people in the medical profession, Lester said.

“People move there and stay, and it seemed like we would be just another one of the doctors,” Lester said. “That’s not a bad thing, but we both wanted to practice in a more rural area.”

The couple married in January, accepted jobs, took their state medical boards, bought a house and moved, all within six months.

At the clinic, Chastain and Lester operate separately, with different offices and patients. They said they enjoy having one another to rely on professionally, however.

“The great thing about being married to someone in the same field is you can talk over the same problem and ask, ‘What would you do?’ He’s then more like a colleague,” Lester said.

The ever-changing variables of family medicine are what attracted the couple to the field. During rotations in medical school, Chastain said, he was eager to do every rotation. At the end, family medicine was the perfect fit.

“Family medicine is a combination of specialties,” Chastain said. “You get to do a little bit of everything.”

Lester added that family medicine means one never knows what the case may be.

“It keeps it interesting,” she said. She also enjoys getting to know different types of people through her profession.

“And you get to know their story,” Lester said. “I love walking into the exam room, seeing familiar people and jumping into conversation.”