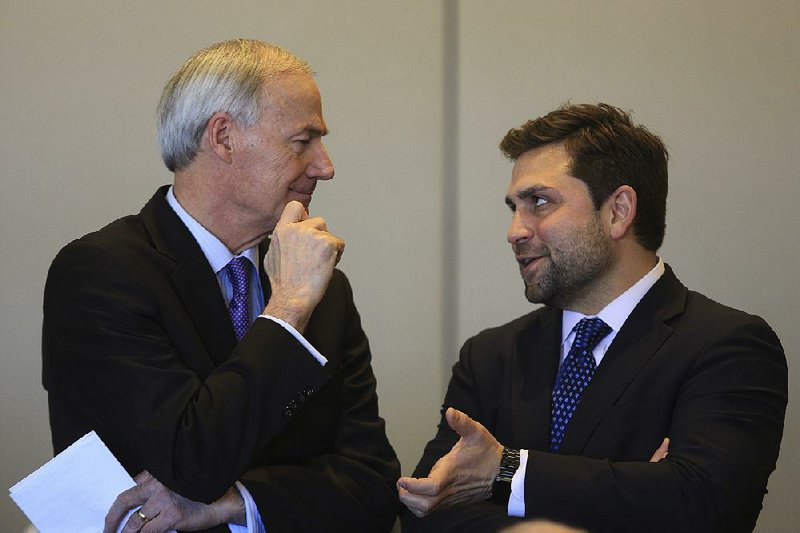 Gov. Asa Hutchinson said he believes the state could conservatively afford a $50 million-a-year income tax cut, even amid some economic uncertainty, but he hasn't yet decided how large of a tax cut he'll ask the General Assembly to pass during its legislative session next year.

The Republican governor said his goal is to unveil a proposed income tax cut plan on Nov. 9 -- the day after Election Day -- when his administration presents its general revenue forecast and proposed budget for fiscal 2018 to the Legislative Council and Joint Budget Committee. The governor's approach would be for the tax cut to become effective Jan. 1, 2018, Hutchinson spokesman J.R. Davis said.

Hutchinson said he's considering future income tax rate cuts for Arkansans who didn't receive any from his nearly $101 million middle-income tax cut that the Legislature passed in 2015. That cut reduced individual income tax rates from the previous 7 percent to the current 6 percent for those with taxable incomes between $35,100 and $75,000 a year, and from 6 percent to 5 percent on taxable income between $21,000 and $35,099.

The Legislative Council and Joint Budget Committee begin weeks of budget hearings Tuesday, in advance of the legislative session that starts Jan. 9.

Earlier this year, the Republican-controlled Legislature and Hutchinson passed a $5.33 billion general revenue budget for fiscal 2017 that factors in the cuts approved in the 2015 legislative session. Most of the $142.7 million increase in the budget goes to the Department of Human Services and public schools under the Revenue Stabilization Act that passed in this spring's fiscal session. Fiscal 2017 started July 1.

"It really cannot be firm in what we can do in terms of tax cuts until we get the revenue forecast numbers in and we see how the rest of the budget fits together," Hutchinson said Friday in an interview in his office.

"From experience, I'm very encouraged that we have absorbed a $100 million tax cut through growth in the economy without missing a beat," he said.

"What gives you some caution is the uncertainty of the economy in the future," Hutchinson said.

"Obviously, if we knew we were going to grow at the same rate, you can say we can do the same [$100 million income tax cut]. But you've got to be somewhat cautious because you don't know what the economy is going to do in the next two years, so I think conservatively you can absorb a $50 million tax cut, even with some uncertainty in the economy.

"But if you get much higher than that, you've got to start offsetting it with closing [tax] exemptions or other things that are hard to build a consensus on in the Legislature," Hutchinson said.

"That's really where my mind is, and we are just waiting to see what those numbers will come in to make a final decision," he said.

During next year's legislative session, lawmakers also will be considering requests for more general revenue funding for public schools, the Department of Human Services and prison-related agencies.

"What you just outlined gives us a tight budget," Hutchinson said. "There is not a whole lot of room for error with those budget demands. We are trying to create savings in the budget that are based upon the efficient delivery of services. We are not trying to cut back on services."

Senate President Jonathan Dismang, R-Searcy, said Friday afternoon that at this point Hutchinson -- who has been working on the proposed budget for fiscal 2018 -- is in the best position to know how large of an income tax cut the state can afford.

House Speaker Jeremy Gillam, R-Judsonia, said the governor has more information than he does about how large a tax cut the state can afford.

"I am going to keep an open mind," while taking a conservative approach until he sees a few more months of general revenue collections, Gillam said.

House Democratic leader Michael John Gray of Augusta said he wants to see whether state agency budget requests presented during the budget hearings starting Tuesday will be "truly reflective of the needs or have they been tightened down to fit a future tax cut."

Before the governor proposes a budget for fiscal 2018 on Nov. 9, Hutchinson said, his staff and the Department of Finance and Administration will meet with each agency. He said he looks at the agencies' requests and hears their budgetary needs.

"The key factor is what the forecast will be for next year and see what flexibility we have in our revenue, so we are on track to get it done to present our balanced budget to the Legislature, but it is an ongoing process," Hutchinson said.

He said his top general revenue budget priority will be to fund educational adequacy requirements for the state's public school students, but he is waiting for the recommendations from the House and Senate Education committees.

Hutchinson said his other top priorities include continuing to reduce the foster care caseload for caseworkers, and his proposed funding formula for the state's two- and four-year colleges to focus more on their performance and outcomes rather than enrollments at the start of the school year.

He said his other budgetary priorities are implementing a new pay plan for state employees and continuing to fund his computer coding initiative.

"We are looking at the Medicaid costs and what we anticipate the growth will be," he said. "We are fortunate in Arkansas that we have ... in the last few years ... constrained the growth of Medicaid to around 5 percent, which is much better than many other states in their performance," Hutchinson said. "But we are measuring as to what costs will be and when you are looking at 4 or 5 percent of a very large amount that goes to Medicaid, that's a significant dollar cost."

The state will pay 5 percent of the cost of providing health insurance to participants in Arkansas' Medicaid expansion next year and 6 percent in 2018.

Senate Revenue and Taxation Committee Chairman Jake Files, R-Fort Smith, said, "With the last 3 months of revenues not hitting forecast, I think it is irresponsible to just throw out a number for tax cuts without identifying which areas would be cut, because that is exactly what is going to have to take place.

"I know that there is a lot of rhetoric about cutting spending, but I have yet to see the political will to do so on little items, and I don't pretend to think it is going to get easier as the numbers get bigger," he said last week in an email.

"I don't think you will have the same process as we did in the last [regular] session, where a tax cut was passed and then everything worked out to make that work by the end of the session," Files said.

"I think this session will be more budget-focused to see what we can afford to do and also what might happen if we passed tax cuts that were triggered by certain revenue growth. This is an option that has gained more steam and has seen more attention given to it," he said.

"Cutting taxes is not something that I believe we do haphazardly. I think we need to refine our focus, determine what will grow jobs fastest and attract people to Arkansas," Files said.

The Joint Budget Committee co-chairman, Sen. Larry Teague, D-Nashville, said he's heard about proposed income tax cuts of either $50 million or $100 million, but he's not sure what the state can afford.

"I do think [Hutchinson] has to be looking at where to cut spending," he said. "I have discussed with him [and] I've heard others discuss with him that the Legislature is really not the body to do that. It takes the administration who is in charge of those departments, who understands what is going on in each one of those departments to really say, 'I got a little fat here,' and, 'I can move this here.' I am hoping that is what he is doing."

House Revenue and Taxation Committee co-chairman Joe Jett, D-Success, said he's floated the idea of including tax cuts as a category in the state's Revenue Stabilization Act, which the Legislature enacts to distribute general revenue funds to programs.

Under an example he gave, lawmakers could place $200 million in income tax cuts at a rate of $50 million a year for four years as a category in the Revenue Stabilization Act, and tax cuts would be delayed if general revenue collections failed to reach certain thresholds, Jett said.

He said he wants to see more information before deciding upon a tax cut.

Rep. Charlie Collins, R-Fayetteville, said his goal is for a one-year, $100 million net income tax reduction enacted next year that could be tied to triggers for general revenue collections and the enactment of cost saving measures at $25 million, $50 million, $75 million and $100 million in tax cuts.

Hutchinson said he's reviewing the idea of using the Revenue Stabilization Act as a trigger mechanism for future tax cuts, and praised Jett and others who have come up with "that creative option.

"I don't want to create hope or promises of future tax cuts that are unrealistic," he said. "I think we can absorb $50 million. I think that's realistic. If you try to do more than that, then you could be putting the budget at risk if the economy is uncertain, so that's where that trigger mechanism could be helpful. But we are having our lawyers look at it just from a constitutional perspective as well."

Dismang said he's "pretty hesitant" about trying to build an income tax cut into the Revenue Stabilization Act for the future.

"Our tax code needs to be predictable for anyone that is moving to the state and for families that live here right now, and I don't think a trigger helps accomplish that," he said.