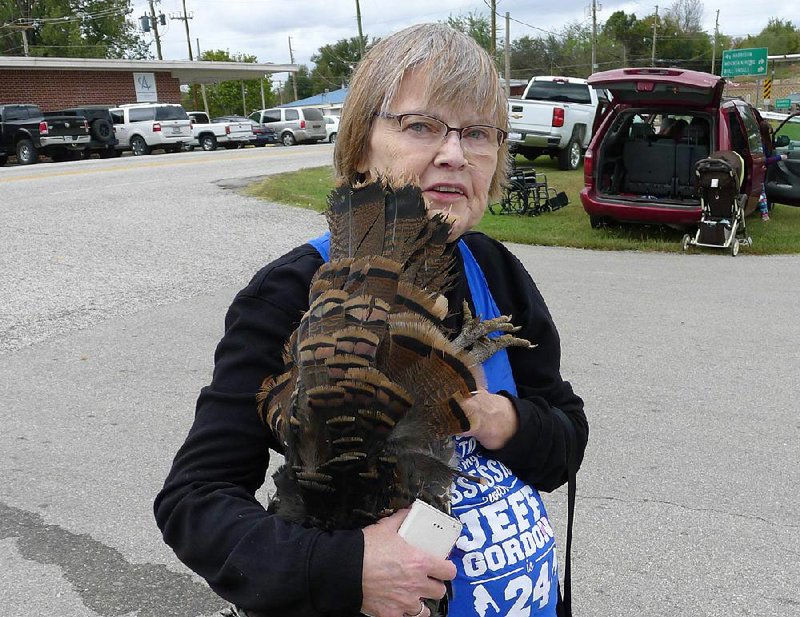 Barb Klug of Bull Shoals got one of the turkeys that was dropped from an airplane Friday at the Yellville Turkey Trot festival. The bird died from the fall. ( Bill Bowden)

A turkey tossed from an airplane Friday at the Yellville Turkey Trot festival died of a bone fracture after hitting the ground, according to a veterinarian's analysis.

Barb Klug, 66, of Bull Shoals said she took the dead bird to a veterinarian in Mountain View, who said it suffered from a fracture of the distal point of the keel bone.

"He had a big wound there, a big wound," said Klug. "He has some wounds on his head, too. The scales on his feet were bleeding. So he really hit hard."

Six turkeys were released from a plane as it flew along Crooked Creek, two blocks from the festival, on Friday. One of those turkeys died. The others spread wings and glided to a landing.

On Saturday, four more turkeys were dropped over the creek and one of those died, according to an article in The Baxter Bulletin of Mountain Home.

The airplane that dropped the turkeys on Friday is registered to Dana Woods, a Mountain View alderman.

On Friday, Klug told a reporter for the Arkansas Democrat-Gazette that the turkey she got would be Thanksgiving dinner at her house. But later, she called the newspaper and left a message saying she made that story up.

Klug said she's actually a volunteer for the world's largest animal welfare organization, People for the Ethical Treatment of Animals.

"In Yellville, we're not supposed to identify ourselves as PETA for our own safety," Klug said Monday.

Klug said she almost killed herself getting to the bird.

"I jumped over that concrete fence, landed real hard, and I might have passed out for a minute," she said.

Klug said Niall Blasdel, 25, the band director at Flippin High School, got to the dead bird before her, but he gave it to Klug because he had also caught a live turkey that day.

Stephanie Bell, senior director of cruelty casework for PETA, said the group had volunteers at the festival, but she wouldn't confirm if Klug was one of them.

"It's important for us to monitor these activities very closely," Bell said. "We've had an ongoing concern that these birds being thrown from planes could die on impact and there isn't any way to verify that if you don't have people there. ... These birds are essentially just thrown to their deaths."

Bell said PETA doesn't instruct people to lie about their affiliation with the organization.

"We didn't instruct people to act a certain way or say specific things," she said.

Klug said PETA wanted her to get a live bird if possible so that it could be released into the wild, but a dead one was also valuable to the organization.

"Having a dead one will further their cause of showing people ... first of all they're ground animals, they're thrown out of a plane, they're totally stressed and confused and they can't right themselves," Klug said. "It's just animal cruelty."

"The results from a necropsy would be invaluable," Bell said.

Wild turkeys can fly at speeds up to 55 mph, but they usually fly from treetop to treetop, at an altitude of less than 100 feet. Woods said last week that the turkeys would be released at about 500 feet over the creek.

The Turkey Trot festival began in 1946. For the past 50 years or so, an airplane has flown by and turkeys were released over Crooked Creek, which is two blocks south of the downtown Yellville square. Last week, Woods said he has flown that mission about 15 times but took a hiatus from 2012 through 2014.

Known to festival attendees as "The Phantom Pilot," Woods remained somewhat anonymous for years. But the identification number on his plane was clearly visible in newspaper photographs last year.

After the birds are tossed from the plane, people chase the surviving turkeys. Some of them become pets. Others become dinner.

The Federal Aviation Administration investigated Woods after getting complaints about the turkey drop last year. The agency instructed Woods not to drop the birds over people or property that could be damaged. Woods said he hadn't been doing that anyway.

The FAA has no jurisdiction over animal cruelty laws, said Lynn Lunsford, a spokesman for the agency.

Bell said her group has heard complaints about the turkey drop at the festival for years.

"Obviously we strongly oppose it," she said. "It puts animals at risk. There's no justification for exploiting animals for entertainment purposes."