LITTLE ROCK — The Arkansas Supreme Court has disqualified a proposal to legalize casinos in three counties from the November ballot.

Justices on Thursday sided with opponents of the proposed constitutional amendment that would give three private companies rights to run casinos in Boone, Miller and Washington counties. The proposal would have given the rights to companies owned by supporters of the proposal. The court ordered election officials to not count any votes for the measure in the Nov. 8 election.

The high court ruled that the ballot title did not inform Arkansas voters that the measure would violate a federal law prohibiting sports gambling in the state.

Because there was omitted information that could affect voters’ decisions, the ballot title “does not honestly and accurately reflect what is contained in the proposed Amendment,” Associate Justice Karen R. Baker wrote.

“The voters are entitled to a ballot title that is honest, impartial, and intelligible and will give them a fair understanding of the issues presented,” she added.

“If we’ve learned anything, it’s very important to have a fair ballot title so that the public can honestly evaluate and vote on an initiative,” he said.

Hutchinson said he was not in favor of the amendment and had reservations about inserting names of companies and locations for casinos into the state constitution, so the disqualification was “good news.”

The timing of the court opinion does raise questions about when these final ballot decisions are made, Hutchinson said. Many ballots were already printed with the initiatives written on them, so some Arkansans will cast votes that will never be counted.

“Here we are one month out, and it’s been struck down,” said Hutchinson, adding that this was not the court’s fault as they follow guidelines the legislature enacted. He said citizens would likely be better served if the decisions were made earlier.

The lawsuit was filed a group funded by dog and horse tracks in the state that currently offer video poker and other forms of electronic gambling. The lawsuit claimed the proposal was misleading to voters and that supporters didn't follow state law for reporting and registering paid canvassers.

The court on Thursday also ruled that voters cannot consider whether to impose award limits in medical liability cases because the language to be placed on the ballot doesn't fully describe what the proposal would do. 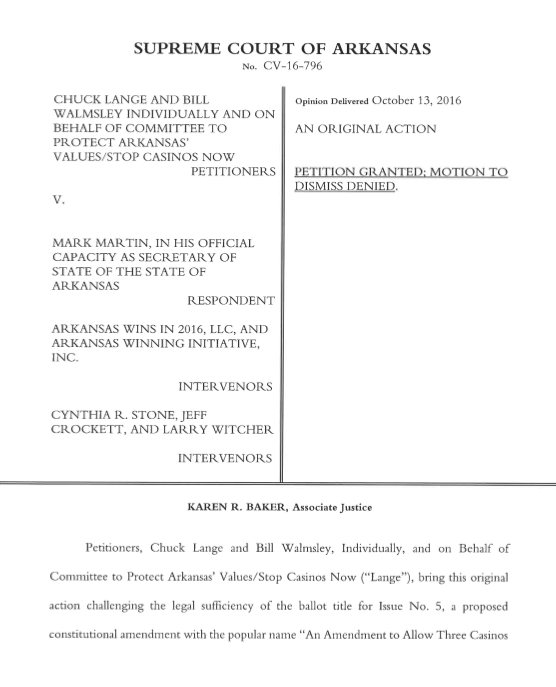