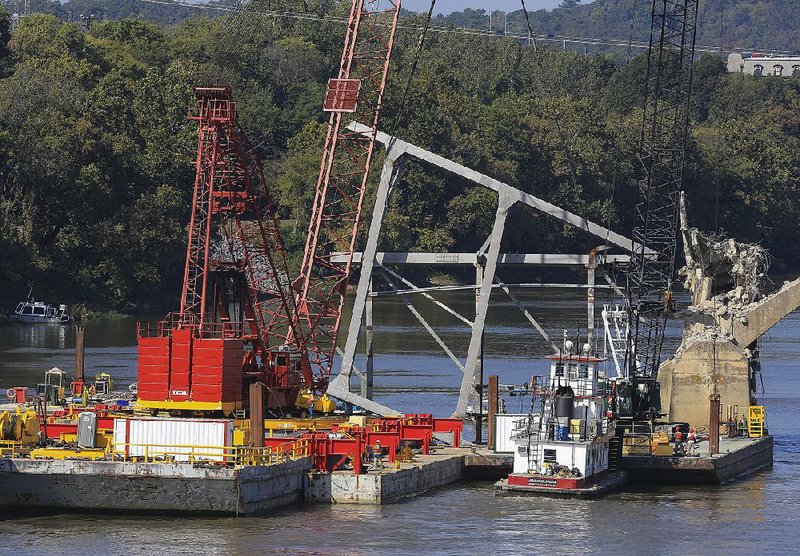 Workers pull pieces of the steel arch from the Broadway Bridge out of the Arkansas River on Wednesday. Safety concerns for the crews were a factor in slowing the work, a state highway spokesman said.

A contractor for the Arkansas Highway and Transportation Department was unable to clear the Arkansas River channel of debris from the Broadway Bridge under the terms of a permit that closed that section of the river to barge traffic for 24 hours. 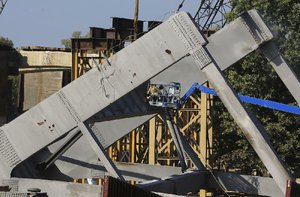 Photo by Staton Breidenthal
Workers begin cutting apart a piece of the Broadway Bridge arch after it was lifted out of the Arkansas River on Wednesday. 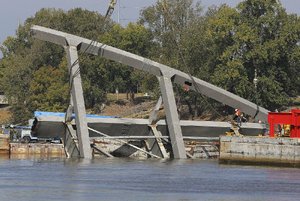 Photo by Staton Breidenthal
Another crew works to pull another piece of the arch to dry land as efforts went past a 24-hour permit that closed part of the river to barge traffic. The arch, which withstood explosive charges Tuesday that were supposed to drop it into the river in an upright position, had to be pulled down. It settled on its side, making the retrieval work more difficult and dangerous.

The development came a day after explosives failed to drop the steel arch anchoring the south end of the span and after several subsequent attempts to pull down the arch took hours before they succeeded.

"There remains apparently five sections of the span in the river," Danny Straessle, a department spokesman, said Wednesday afternoon. "They have two out."

Representatives of the U.S. Coast Guard and the U.S. Army Corps of Engineers said they now understand that the river channel will be cleared by today. "If all goes well," Eric Washburn, the western-rivers bridge administrator for the Coast Guard in St. Louis, said Wednesday afternoon.

Also Wednesday, the Corps of Engineers issued a river navigation notice saying, "It is anticipated that the closure of the navigation channel will be extended to mid-afternoon [today], unless there are other delays."

The Highway and Transportation Department, as the bridge owner, could face civil penalties for violating the terms of the permit, which was issued by the Coast Guard to the department on Sept. 12., Washburn said.

He recalled just two instances in which the Coast Guard sought civil penalties in similar cases, and he didn't know how those cases were resolved.

"We could issue a letter of reprimand," he said. "The real issue is [river] traffic."

If 10 barge tows are delayed because of the late debris removal, "that would be a factor in our thinking," Washburn added.

He said he knew Wednesday of no more than two barge tows that have been unable to pass through the area.

One of two dozen conditions outlined in the four-page permit states that "after the main navigation channel span is explosively dropped, it shall be promptly and completely removed and the navigation channel swept and cleared within 24 consecutive hours."

Washburn said the language in the letter stated that the 24-hour period didn't begin until the steel arch fell into the water, which was shortly before 3 p.m. Tuesday instead of the planned 10 a.m.

The explosive charges were detonated about 10 a.m., but the steel arch that was added to the bridge in the 1970s to accommodate the navigation channel didn't budge. It took a half-dozen tries by construction crews using a towboat, a barge and a crane to pull down the arch consisting of 2 million pounds of steel.

But Tuesday's challenges didn't stop with felling the bridge, according to Straessle.

Pre-cuts in the arch and the placement of the explosives were designed so the arch would drop into the river and settle to the riverbed in an upright position, he said. That would make it easier for divers to hook the cables of cranes on barges to the fallen bridge sections and lift them out of the river.

That plan went awry when the arch fell into the river and settled on its side, which made it difficult for the divers to hook the cables onto the pieces, Straessle said.

"The safety of the workers is paramount," Straessle said. "They are basically taking their time to do the job right, as well as do it safely."

Washburn said it isn't unusual for something to go wrong on projects the size of the Broadway Bridge.

"They are big projects, and things can happen," he said.

Another recent project in Washburn's region was very similar to that of the Broadway Bridge. The charges detonated, but the bridge didn't fall into the river and had to be pulled down, Washburn said.

On another project, one-third of the charges didn't detonate, but the bridge fell, he said. Removing the bridge sections with live explosives amid the debris proved difficult, Washburn said.

"Things haven't exactly gone smoothly," he said. "It's unfortunate. I'm sure they are working as hard as they can."

In 2014, Massman Construction Co. of Kansas City, Mo., was awarded the $98.4 million contract for the Broadway Bridge project. The company is in the midst of a 180-day window in which it must remove the 93-year-old bridge and open the replacement one to traffic. The company faces an $80,000 penalty for every day it exceeds the 180 days, which ends in March.

The implosion of the bridge Tuesday was arranged by a Massman subcontractor.