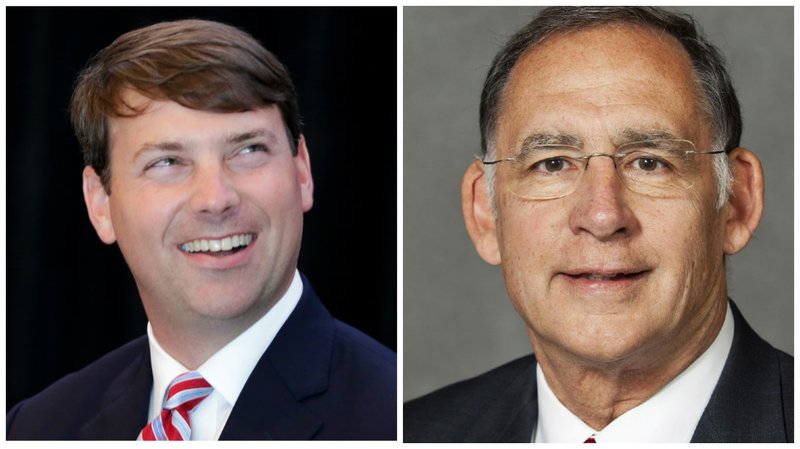 Boozman, Eldridge and Libertarian candidate Frank Gilbert debated for an hour at the Arkansas Educational Television Network on the University of Central Arkansas campus. It was the first time the three candidates in the race participated in the same debate.

Boozman of Rogers has served in the U.S. Senate since 2011 and previously served in the U.S. House of Representatives from 2001-11. Eldridge of Fayetteville was U.S. attorney for the Western District of Arkansas from 2010-15. Gilbert, a former mayor of his hometown of Tull, is school suspension manager for the Bauxite School District.

[INTERACTIVE: The 2016 election in Arkansas]

"Both of these were nominated by their parties, and as we go forward the things I have to look at is the total package," he said.

Boozman said he's worried about who is elected to succeed President Barack Obama because the next president appoints nominees to the U.S. Supreme Court.

He said Trump provided a list of people whom he will consider appointing to the court "that will look at the Constitution and try to interpret the law as the writers of the Constitution or the writers of the legislation intended and act appropriately." The senator said Clinton wants to nominate people to the U.S. Supreme Court who "will interpret things as they feel like they should be and disregarding the law and making new law."

"Hillary Clinton is running on a third term of replacing President Obama. She has made no bones about that. I think most of our listeners out there ... understand that that is simply unacceptable," Boozman said. "This country cannot take another third term of President Obama and all the policies that he has put in place. ... For those reasons, I am supporting Mr. Trump and voting for him."

As for Clinton's private email server, Boozman said that if he and others had been in the same situation, "we all would be indicted and all had to pay a penalty for doing that."

Eldridge said Trump doesn't have the temperament to serve as the president of the United States.

Eldridge said he's running for the U.S. Senate because he would put his country over his party.

"I would again call on Sen. Boozman to withdraw his support for Trump," he said, adding that 16 Republican senators have taken that step.

"Whoever is in the White House, I will work with them or I will fight them, if it's the right thing to do for this state and this country," Eldridge said.

Boozman countered that he's heard Eldridge attack Trump several times but that Eldridge "has never addressed what is going on with Hillary Clinton."

As a former prosecutor, Eldridge hasn't called Clinton out about having classified information on her private email server, Boozman said.

Regarding an Islamic militant group's attack at the U.S. Consulate in Benghazi, Libya, in September 2012, "here's a lady that does get the call at three o'clock in the morning and instead of being concerned about the people on the ground, it appears from the WikiLeaks information we got her first concern was covering her rear end and not being concerned about those people," Boozman said.

He wondered why Eldridge hasn't called out Clinton "in the sense that this is a lady [who] in the course of doing business in the State Department [as U.S. secretary of state] chose to give preferential treatment to the people that were giving money to the [Clinton] Foundation, which essentially was a Clinton slush fund."

But Eldridge said Clinton should be called out for saying Trump's supporters include a basket of deplorables.

"I think that term was horrific, too. She should have not used that. She has made a lot of mistakes, email, we can go on and on," he said.

Eldridge later told reporters that he doesn't believe a special prosecutor needs to be appointed to investigate Clinton's private email use as secretary of state. "I think it's important not to Monday morning quarterback a charging decision based on news reports," he said.

During the debate, Boozman said that though Eldridge criticized Clinton on Wednesday, "that certainly hasn't been the case as we have gone along" during the U.S. Senate race.

"But I don't see any press releases of him in the past coming out in that regard nor do I see any press releases [about] his old boss, President Obama, [then Attorney General] Eric Holder, when he worked for him ... of countless things where they overstepped, things that have been declared unconstitutional, out of line ... like the amnesty proposal of the president, which I am very much against," Boozman said.

"So I think this is news that Conner is wishing to make a statement that is critical of Sen. Clinton," Boozman said.

But Eldridge said he has called out both Trump and Clinton in the U.S. Senate race.

"And that's something that Sen. Boozman must have missed in his absence," he said.

"As for the presidential race, let's be clear Sen. Boozman is supporting his party over the best interest of this country, and I believe there is only one candidate in this race that I would trust with the nuclear codes," Eldridge said, referring to Clinton.

He said Boozman repeatedly ties him to Obama to divert attention from Boozman's record, and that "it's a political tactic from Washington that we are tired of."

Gilbert said Trump is an embarrassment to the Republican Party and the American people.

"To think that our allies across the world, and our enemies as well, see what he is saying and doing in this country makes us look like a third-world banana republic, and I hate that," he said.

Gilbert said both Clinton and Trump are flawed candidates.

"Hillary's baggage is well-known in this state, probably better here than anywhere else in the world, so a lot of us know that she is not fit to be president either," he said.

Gilbert said Libertarian presidential nominee Gary Johnson served as a Republican governor in New Mexico with a Democratic-dominated Legislature and that he is a man of good character, of competence and of a steady nature that's needed.

"I would encourage every American and every Arkansan to consider Gary Johnson as a rival alternative to the two poor candidates that the old parties have provided us," he said.