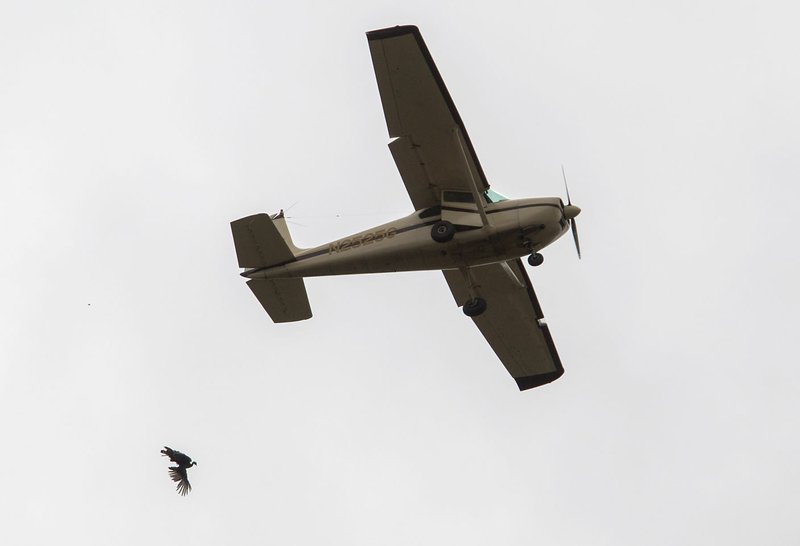 2016 FILE PHOTO: A turkey is dropped from a 1959 Cessna 182B airplane during the annual Turkey Trot in downtown Yellville.

An investigator for the Federal Aviation Administration saw no violations Friday when six live turkeys were tossed from an airplane over Crooked Creek, two blocks south of the downtown Yellville square, where the annual Turkey Trot festival was held.

One of those turkeys died on impact.

"Our investigator saw no violations of FAA regulations during the event," said Lynn Lunsford, a spokesman for the FAA in Fort Worth.

The annual festival was Friday and Saturday. Lunsford said the investigator attended only on Friday.

According to an article in The Baxter Bulletin of Mountain Home, four more turkeys were dropped Saturday and one of those died.

After the birds are tossed from the plane, people chase the surviving turkeys. Some of them become pets. Others become dinner.

Lunsford said it's legal to drop objects from airplanes as long as there is no risk of injuring people or property on the ground. He said the FAA has no jurisdiction over animal-cruelty concerns.

The airplane that dropped the turkeys Friday is registered to Dana Woods, a Mountain View alderman. Woods said last week that he has flown the plane for the turkey drop about 15 times, taking a hiatus from 2012 to 2014.

The airplane turkey drops have taken place for about 50 years. The festival began in 1946.

In a text message, Woods said he wasn't surprised at the FAA investigator's finding. Woods said he flew the plane at an altitude of 600 to 700 feet Friday to make sure he was above the 500 feet required by the FAA.

When asked if the release of turkeys would continue from his airplane at next year's festival, he didn't respond.

Most of the turkeys that were dropped Friday fell straight down for a while before apparently getting their bearings and opening their wings, which allowed them to glide to a landing. The bird that died appeared to be trying to flap its wings instead.

Barb Klug, a volunteer for People for the Ethical Treatment of Animals, gathered the dead turkey. She said a necropsy by a veterinarian indicated it died of a fracture of the distal point of the keel bone.

Lunsford said the FAA received about seven complaints to its hotline because of the turkey drop. He said there was no written report of the investigation, just observations.

Stephanie Bell, senior director of cruelty casework at PETA, said the FAA should rethink its regulations.

"If the Federal Aviation Administration agent thinks that a human being has to be hurt or someone's property has to be damaged before the agency can take action, then PETA suggests that the agency needs to think harder: A plane dropped live turkeys out of the sky, causing the death of two frightened birds -- who, sadly enough, were indeed someone's property, and we promise that there will be repercussions," Bell said.

Wild turkeys can fly at speeds up to 55 mph, but they usually fly from treetop to treetop at an height of less than 100 feet.