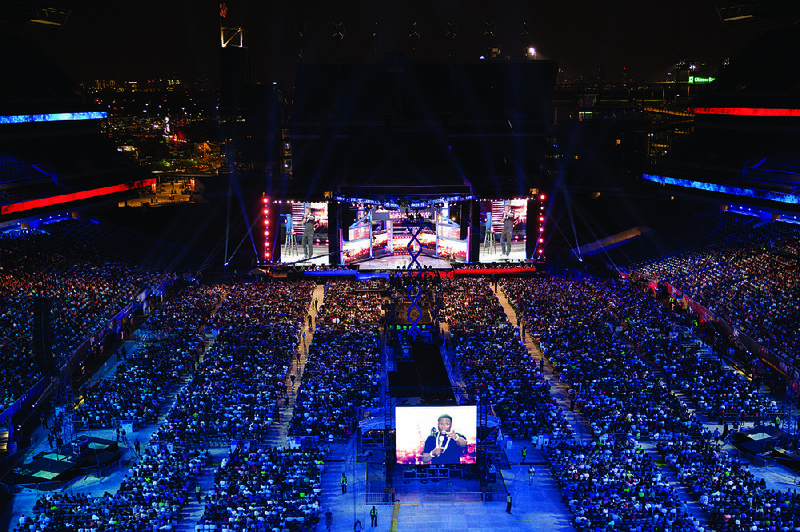 Comedian Kevin Hart performs before a hometown crowd of 50,000 in the concert fi lm Kevin Hart: What Now?

In a roundtable interview I conducted with him in 1999, Dave Chappelle once said, "If a gun was put to my head and I had to choose one facet of show business, I'd do [stand-up]. It's the purest. There's no committee."

From watching Kevin Hart's latest offering Kevin Hart: What Now?, it seems as if he shares Chappelle's preference for working crowds on his own. His manic persona on the big screen has been fitfully effective. He was a scream as a homicidal bunny in The Secret Life of Pets and as a man not quite willing to admit he has fallen in love in About Last Night, but his volcanic energy can be grating in longer roles.

Rating: Rated R for some sexual material, and language throughout

When his only co-star is a gold-plated microphone, it's a different story.

Hart's formidable gifts as a storyteller are supplemented by his compact but agile physique that enables him to contort himself into positions that a kinesthesiologist would be hard pressed to explain. The life stories he shares are fairly mundane. His greatest fears include confronting wild animals outside his house, explaining to his fiancee why he has arrived home at 10 a.m. and being annoyed by fans in airport restrooms.

Hart recited the first of these incidents during his recent opening monologue on Saturday Night Live. It's still funny to hear him repeat the tale, especially because he can now deliver it with a couple of guilt-inducing touches that might have gotten him in trouble with the Federal Communications Commission.

What makes Hart's tales of mild misfortune or sex gone wrong amusing is that he delivers the stories with a seemingly endless series of bizarre walks and broad facial expressions. Hart now performs for audiences as large as the 50,000 who attended Lincoln Financial Field (the home of the Eagles) in his hometown of Philadelphia during the making of this film, so his performances have to be big enough to be seen from the nosebleed sections of football stadiums.

Hart's stand-up persona consists of reminding the audience he has the guts to admit that he has no guts. He boasts that if anyone in his family were to be attacked by a shark or a mountain lion, he won't be rushing to the rescue. In lesser hands his demonstrations of how the wounded might move would be disgusting, but there's something oddly charming about a person who acknowledges he'd preserve himself before others.

Hart supplements his delivery with some large screens that present backgrounds that match the story he's telling. These backdrops are probably helpful at Lincoln Financial Field, but they're optional on the big screen. Hart's body and voice paint a vivid picture and don't need a lot of support.

Director Leslie Small handles the stand-up portion of What Now? and keeps the pace from getting slack. Tim Story, who directed Hart in the Ride Along movies, frames the arena set with a mildly amusing 007 spoof in which Hart and former Bond girl Halle Berry take over a high stakes card game with expected disastrous results.

But while it's fun to watch Hart behave like a bull in a china shop at a casino and burn rubber in a luxury sedan, the comic's best moments come when there's no filter between him and his fans.