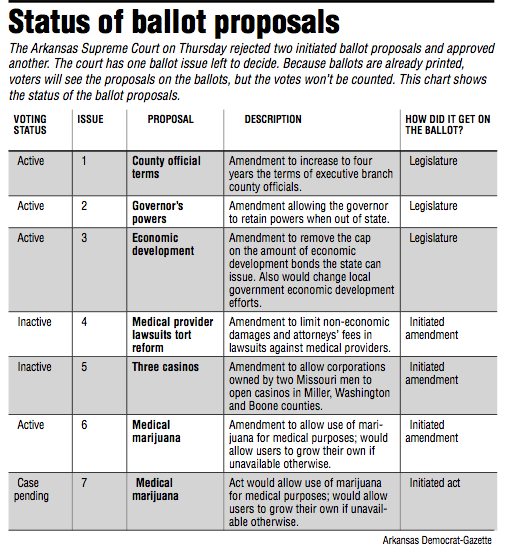 Voters will decide the fate of medical marijuana in Arkansas.

Do you support legalizing medical marijuana? 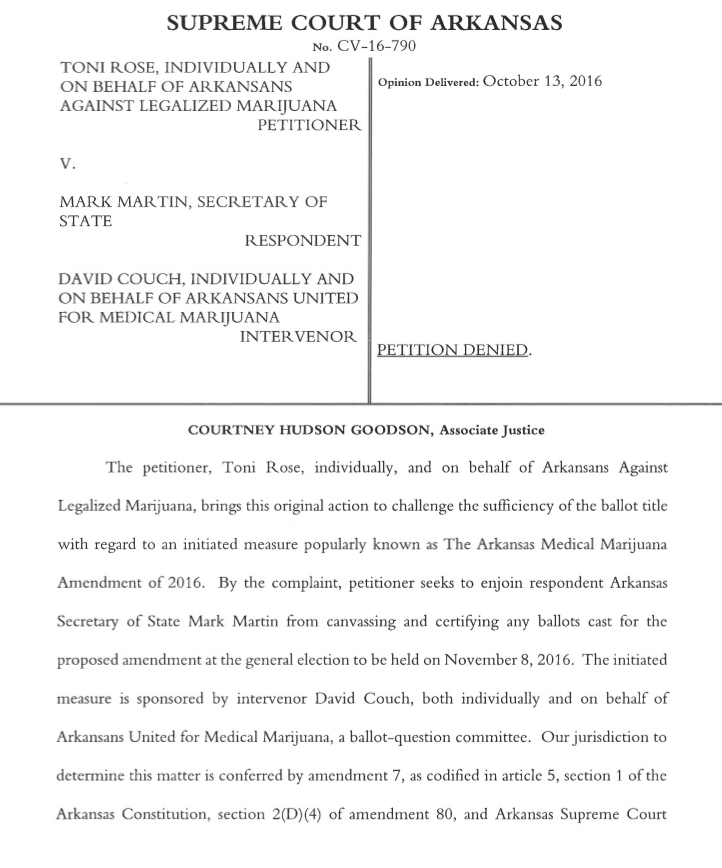 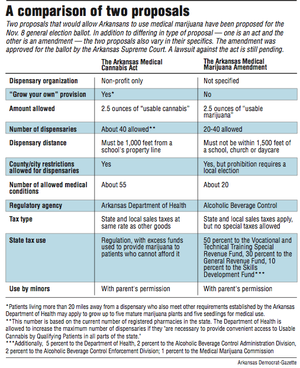 Photo by Arkansas Democrat-Gazette
A comparison of two proposals

On Thursday, the Arkansas Supreme Court said that the ballot summary of the Arkansas Medical Marijuana Amendment will allow voters to make an informed decision on Election Day. As a result, the court denied an attempt to prevent votes from being counted.

Now, with just 25 days left until the general election, backers are promising an advertising blitz.

"Let the campaign start," said David Couch, a Little Rock attorney backing the amendment. "We've been quiet, waiting on the Supreme Court's decision. You don't want to spend a lot of money and be taken off the ballot."

The justices did not rule Thursday on a competing medical-marijuana ballot measure known as the Arkansas Medical Cannabis Act, which would legalize medical marijuana and allow individuals to grow their own if it wasn't available.

Also Thursday, the Supreme Court ruled that votes should not count for Issue 4, which would limit damages and attorneys' fees awarded in medical provider lawsuits, or Issue 5, which would allow corporations owned by two Missouri men to open casinos in Miller, Washington and Boone counties.

Ballots have been printed for the Nov. 8 elections, so the effect of the court's rulings on the liability lawsuits and casino measures is to leave votes on those issues uncounted.

Other issues on the ballot were referred by the Legislature in 2015. They would lengthen terms of executive county officials to four years, allow the governor to retain power when leaving the state and revise constitutional rules on economic development.

Assured that votes will count for the Arkansas Medical Marijuana Amendment, Couch said he expected financial backers to increase their spending.

When medical marijuana was on the ballot in 2012, Couch said, supporters spent about $400,000 on television advertising in the last few weeks of the campaign. He hopes to spend more this year.

"I have found physicians that have agreed to do the commercials," he said.

Melissa Fults, campaign director for Arkansans for Compassionate Care, a group that supports the competing marijuana measure, said she expects a decision on the act in about a week.

The court had approved the Medical Cannabis Act's ballot summary in a ruling on Sept. 22, but a lawsuit alleging problems with the number of valid signatures has yet to be resolved. Couch provided information to the attorney who filed the lawsuit.

The court's decision on the amendment Thursday "wasn't a surprise," Fults said.

In the unanimous opinion, Justice Courtney Goodson wrote that Arkansans Against Legalized Marijuana had made substantially similar complaints in lawsuits against both the act and the amendment and that the court didn't find the complaints compelling the first time.

In a new argument, the anti-marijuana group said the ballot title failed to inform voters that professionals could not be disciplined for using medical marijuana.

Goodson's opinion said that the arguments, in large part, "call for an interpretation of the amendment," but that the court "does not interpret a proposed amendment or discuss its merits or fault."

Both the act and the amendment state that "an employer shall not discriminate against an individual in hiring, termination, or any term or condition of employment, or otherwise penalize an individual, based upon the individual's past or present status" as a medical-marijuana user.

However, the amendment states that it does not require an "employer to accommodate the ingestion of marijuana in any workplace or any employee working while under the influence of marijuana." The act has almost the same wording, with "Cannabis" substituted for "marijuana."

Arkansas Surgeon General Greg Bledsoe, who serves as a spokesman for Arkansans Against Legalized Marijuana, said he was disappointed by the ruling, but it doesn't change the group's strategy.

"We expected the court's decision. We realize that it was probably a bit of a long shot because of the history of the court not striking down many of these," he said. "But, at the same time, we wanted to raise our concerns. We appreciate the court reviewing it."

In 2012, the court upheld the ballot title of a medical-marijuana ballot measure. It went on to receive about 49 percent of the vote.

According to a financial report filed Thursday, the group raised $47,200 in September.

Bledsoe said Arkansans Against Legalized Marijuana is raising money for its own television commercial, which "explains why we don't need it, the differences between the components in marijuana the plant and why we believe its wrong to call marijuana the plant medicine."

Fults said she did not expect to receive additional money from nationally oriented groups like the Washington, D.C.-based Marijuana Policy Project, New York-based Drug Policy Alliance and the DKT Liberty Project. Those groups had collectively given at least $75,000 in past months, according to financial reports.

"They just look at it as throwing money away on two competing ballot initiatives," she said.

"They had a million dollars earmarked for us, but then when there were two initiatives, the funders didn't want to take that chance."

Advertising will be different as a result, Fults said.

"It's grass roots. It's volunteers. It's people talking to people, not big money," she said. "We managed to get signatures turned in before anyone else did thanks to volunteers. People know that it's not about money for us, it's about the patients."

Couch and Fults both have said that support for allowing marijuana to be used as medicine has increased in the state, but they face more organized opposition this year from Arkansans Against Legalized Marijuana and Hutchinson.