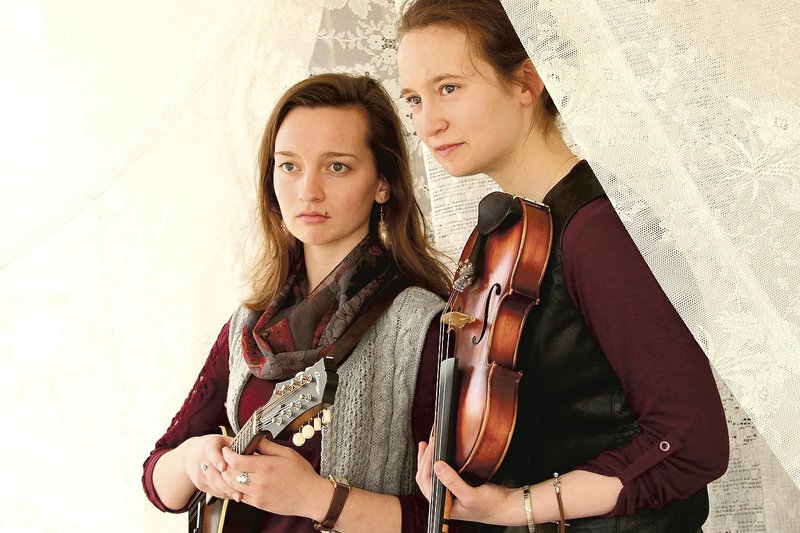 Dwight Ferguson and Angelyn Hobson "Maggie and I don't consider ourselves musicians" Abigail says. "So all we can do is admire and appreciate people who really are gifted with instruments. One thing we try NOT to do is define ourselves. We're just us. We do what we do and try not to think about it too much."

The Vogts Sisters (pronounced votes) have been winning awards for their songwriting since they started touring only four years ago. On Saturday, they return to Eureka Springs where they won last year's singer/songwriter contest at the Ozark Folk Festival, which earned them the opening spot for the headliners of this year's festival, The Elders.

This is the festival's 69th year, making it the longest continuously running folk festival in the United States. Local, regional and nationally touring artists converge on Eureka Springs for a celebration of all things folk from Thursday through Saturday. Although their home is just a few short hours away in Erie, Kan., last year was The 20-something sisters' first time playing at the festival -- an experience that won them an eight hour recording session in addition to their performance at this year's festival. Their third album "Homeward" was released in June, and the two have a lot to say about it!

COST — Free; headliners at The Auditorium $25

Q. How did you decide which songs to submit [for the contest]? Were they songs you had already written or did you work on new material for this contest?

Maggie: We submitted songs I'd already written. Granted, they weren't very polished, so we had to work on performance. But I think they'd all been written within a year of the contest. We picked what we liked, what we were most excited about at the time. I remember playing "Remain" and "My Lover's Arms," and they were still fairly new and fresh to us.

Q. Your new album is described as an "attempt to truly define who you are as artists." What made this album different from your first two?

Maggie: This project was a source of wrecked nerves as well as relief. We wrote the songs and performed all vocals and instrumentation, so the honesty of it all was a huge relief. We wanted to make something that equates to a live performance. All of that being said ... I stressed over everything I did on "Homeward." But, luckily, Abbey doesn't stress over music. She was relaxed; I was a bundle of nerves. And Kelly Werts, the awesome engineer who put it all together, made it work.

I don't look at this album as an attempt to define. It's just an album of songs that are meaningful to us, and hopefully the connection we have to the songs comes across when you listen in. We were just doing what we like to do.

Abigail: The difference between "Homeward" and our previous two albums is very simple -- it's just US! Maggie and I had never played our instruments for the other albums, and it felt like we were lying to whomever bought them...rather than [saying], "This, right in your hand -- this is what you'll hear at one of our gigs." ...we have found that if we keep things simple and real, then everything is more enjoyable to us.