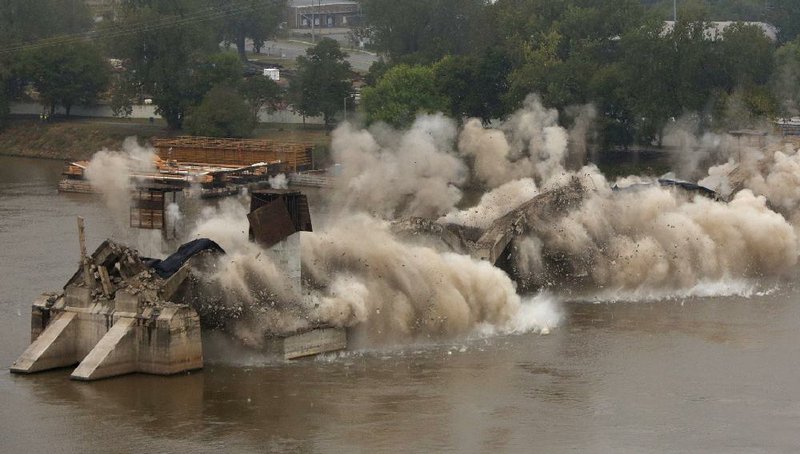 A chorus of booms and a shroud of smoke surround the concrete arches of the Broadway Bridge early Saturday. ( Mitchell PE Masilun)

Chunks of the Broadway Bridge's concrete arches splashed into the river on a foggy Saturday morning amid a series of explosions that tore through the remnants of the span that had connected Little Rock and North Little Rock for 93 years. 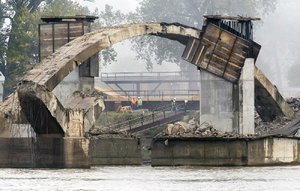 Photo by John Sykes Jr.
Workers assess the situation Saturday morning after one arch was left standing. It was finally taken down by a pneumatic ram later in the day, a highway spokesman said. 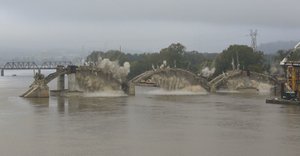 Photo by Staton Breidenthal
Explosives went off early Saturday to send the Broadway Bridge’s concrete arches into the river’s depths.

Photo by Staton Breidenthal
Explosives went off early Saturday to send the Broadway Bridge’s concrete arches into the river’s depths. 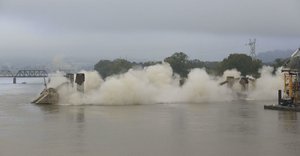 Photo by Staton Breidenthal
Explosives went off early Saturday to send the Broadway Bridge’s concrete arches into the river’s depths. But as the smoke began to clear, one stubborn arch (shown) remained standing.

But when the dust and smoke cleared Saturday, one of the six arches was still standing.

A quick assessment suggested that the explosives on that arch had detonated, but they were in a hole that was drilled too deeply into the concrete. That resulted in only the bottom of the arch being blown out, said Danny Straessle, a spokesman for the Arkansas Highway and Transportation Department.

The last arch finally dropped into the Arkansas River shortly before 2:30 p.m. after it was hammered by a pneumatic ram, Straessle said.

The falling of the arches provided an exclamation point on a week of high-profile bridge-removal operations that didn't go as planned. Project contractor Massman Construction Co. of Kansas City, Mo., which was awarded the $98.4 million bridge contract in 2014, closed the old span on Sept. 28 and began dismantling it. The company has 180 days to remove the old bridge and open the new one.

On Tuesday, explosives were detonated to collapse the span's steel arch into the river. But the arch, which was added in the 1970s to accommodate the McClellan-Kerr Arkansas River Navigation System, withstood the blasts.

It took towboats, barges, a crane and six tries to pull it down. It finally fell, five hours later than planned.

And, instead of the steel collapsing into pieces into the river, the arch toppled over and came to rest on its side on the riverbed, making it harder to clear the river navigational channel.

The U.S. Coast Guard had given Massman 24 hours to clear the channel. Ultimately, it took the company 48 hours to take down the steel arch and remove the resulting debris from the navigation channel.

State highway officials say such delays are par for the course, particularly on large construction projects.

"That's what's so great about construction," said Lorie Tudor, the Highway Department's deputy director and chief operating officer, who was among senior agency officials watching the detonation from the Main Street Bridge. "You can't always predict what's going to happen. It's always an adventure."

A fraction of the spectators on hand for Tuesday's detonation of the steel arch showed up for Saturday's explosions, which occurred an hour earlier than Tuesday's and on a day when many downtown businesses were closed.

No spectators were allowed to watch Saturday from the North Little Rock riverbank because of the concrete arches' proximity to the bank on that side and the potential danger of debris from the explosions.

But even for people who didn't leave their homes to see it, Saturday's blast was noticeable.

"The 'boom' was most impressive in our living room several miles away in NW LR's Kingwood 'hood,'" James Fisher, a Little Rock lawyer, said on Twitter.

Other reports said the blast could be heard or felt as far away as Jacksonville and Cabot.

Even before the dust settled Saturday, a towboat began moving a barge with a crane into place to begin removing the concrete debris from the river bottom.

Massman is under no time constraints to remove the concrete debris because the pieces aren't in the navigation channel. However, the department said, it is required to remove all reinforcing steel from the river and all pieces of concrete that are larger than a bowling ball.

With the arches gone now, Massman will use heavy equipment to remove the arches' foundations, which still jut out of the water. Once the foundations are dismantled to roughly the level of the river, the company will set off more explosives this week to remove what 's left of them underwater, Straessle said.

Information for this article was contributed by Austin Cannon of Arkansas Online.