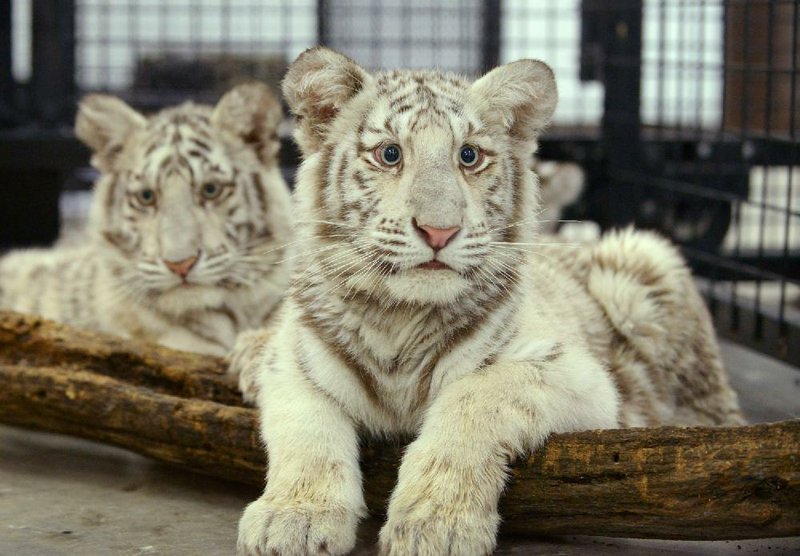 These 5-month-old white tiger cubs, which suffer from birth defects caused by inbreeding, are among the animals being moved from a Colorado center to a wildlife refuge near Eureka Springs.

EUREKA SPRINGS -- An Arkansas wildlife refuge is rescuing more than 100 big cats from a zoo in Colorado. 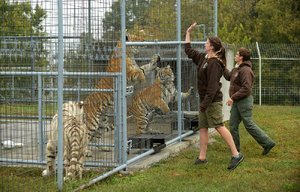 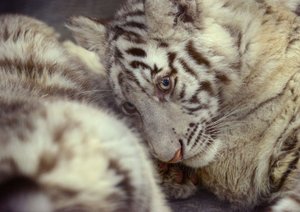 Photo by Ben Goff
Five-month-old white tiger cubs lie in an enclosure Thursday at Turpentine Creek Wildlife Refuge in Eureka Springs. The cubs are among more than 100 animals Turpentine Creek is in the process of rescuing from a closed sanctuary in Colorado. The cubs suffer from metabolic bone disease and other birth defects caused by inbreeding. 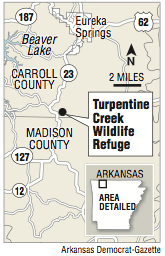 Miranda Smith said it's the largest animal-rescue operation in Turpentine Creek's history and possibly the largest ever in the United States.

"In a single day, the number of animals in our care more than doubled," said an email Turpentine Creek sent Wednesday to friends and potential donors. "Enclosures in Colorado are in desperate need for updates and animals are in need of veterinary care. So much needs to be done before the winter weather starts in Colorado."

Before the Colorado rescue began, Turpentine Creek had 84 big cats and 11 bears at its 459-acre site on Arkansas 23 south of Eureka Springs, Smith said.

She said Serenity Springs had 103 big cats, 11 bears and a few other animals. New homes are being sought for all of them. Smith said the Colorado refuge is closed during the rescue.

The rescue began Sept. 21. As of Thursday, 27 big cats had been moved from Colorado to the Turpentine Creek refuge, Smith said. That number includes 17 tigers and four lions.

Smith said Turpentine Creek plans to keep about 32 big cats from Serenity Springs. The Arkansas refuge is working to place the others at similar centers across the country. So far, other refuges have agreed to take 20, she said.

But plans could change, said Smith.

"The plans change every day," she said. "We would like to take as many as we can here."

Tigers in America is a partner in the rescue effort. The nonprofit organization lists Turpentine Creek as one of the 13 best tiger sanctuaries in the United States.

Smith said the rescue has been stressful for the refuge's staff as well as the animals. She said employees have been working 12 to 15 hours a day, seven days a week.

Her parents weren't available Thursday because they were in Colorado. Smith, whose official title is hospitality director at Turpentine Creek, said it's a 13-hour drive from Eureka Springs pulling a trailer that can haul four big cats back to Arkansas. Other haulers have volunteered to help relocate the animals.

Smith said Turpentine Creek doesn't plan to maintain a second refuge in Colorado, so that real estate may be sold after the rescue.

"We had to buy this place to rehome these animals to a place they deserve," she said. "We purchased the property. The animals were included as assets."

Tigers in America assisted with the down payment on the Serenity Springs property, said Smith. Tigers in America will match donations received for the rescue, according to Wednesday's email.

Smith said they hope to have all the Serenity Springs animals at other sanctuaries by Christmas.

"We're just trying to place these animals as quickly as possible," she said.

Smith said the owner of Serenity Springs had been ill and unable to care adequately for the animals there.

"The previous owner of the Colorado facility was diagnosed with cancer," according to Wednesday's email. "For two years, he had diligently searched for a group to take on the care of his animals. Finally, he found Turpentine Creek and reached out to us. After a brief visit to the facility ... we could not turn down the opportunity to help these animals."

On Oct. 3, Nick Sculac, the owner of Serenity Springs, posted on that sanctuary's Facebook page: "I have decided that it was best for the animals that I have promised a forever home to that I find someone to take over the facility. I did not want to wait until the last minute and risk the unknown. ... On Sept. 21, Turpentine Creek Wildlife Refuge accepted the task."

Smith said many of the rescued Colorado animals were malnourished and needed immediate veterinary care.

She said three 5-month-old white tigers taken to Turpentine Creek from Colorado were suffering from a bone disease.

"They have no bone density," said Katie Anderson, a staff biologist at Turpentine Creek. "They have a lot of fractures and breaking. When they got here, they couldn't even walk."

With proper nutrition, the bones could heal on their own, and the white tigers could be walking then, said Anderson.

"And hopefully running," said Smith. "They have not moved hardly at all since they got here."

Smith said Turpentine Creek will need to build additional habitats at the Arkansas refuge to accommodate some of the new cats.

Turpentine Creek has been soliciting donations for the work. The refuge recently opened a veterinary hospital on the site that was funded with about $560,000 in donations. At this point, Turpentine Creek doesn't plan to keep any of the bears from Serenity Springs.

According to a June 26, 2015, article in The Colorado Springs Gazette, Serenity Springs had been cited several times by the U.S. Department of Agriculture for animal-welfare violations. The violations included failure to provide adequate veterinary care to sick and underweight tigers, according to the article.