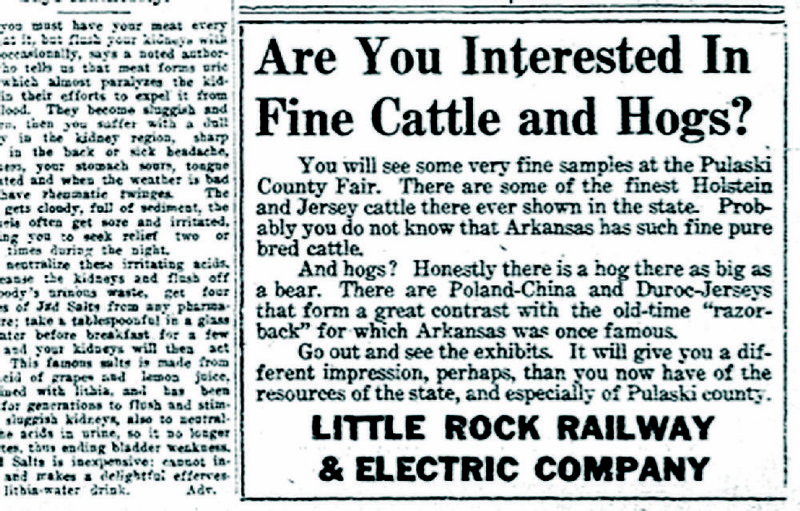 A hundred years ago today, civic leaders in Little Rock were not happy with the weather. After months of fundraising and hype, cold rain was ruining the 1916 Pulaski County Fair.

In a bit of a desperate move, by the end of the week the organizing association announced it would keep the fair open an extra day -- a Sunday.

How well did that go over? I'll tell you in a bit, but first, no, "county fair" isn't a typo. The state fair was at Hot Springs that year.

The Arkansas State Fair originated at Little Rock in November 1868, on 40 "beautiful" acres near where Center and 17th streets meet today. Check out this sweet review of Little Rock's second state fair, written by someone at the Pine Bluff Press and quoted March 31, 1870, by the Daily Gazette.

The Press first complained that the Little Rock state fair's scope and all of its details were "too narrow, confined and circumscribed." More sections of the state should be represented: "The planter from the silver bottoms and the rich, loamy black lands with the snow-white staple; the inhabitants of the breezy, health-giving, fertile hills with their varied products; the farmers of the grain-growing and fruit-producing prairies and plateaus of the northwest with sheafs of golden grain and the mellow, autumnal gifts of Pomona; and the dwellers of the mountains which lay along our western border like some huge, ruminant animals, with their brown shaggy sides, should all meet and commingle and exchange ideas, observations, etc.

"The contributions of the citizens of Little Rock which were very creditable to them at the last fair -- the group of numerous fancy articles and [bijouterie], presenting a very pretty and picturesque appearance -- would then be an interesting, but not the only feature."

Despite its ability to muster an impressive display of bijouterie, Little Rock's first fair association didn't last. After it failed, another organizing body kept the Little Rock state fair going more than 20 years.

When bad weather dampened turnout, sponsoring merchants were forced to dip into their pockets to pay the prizes promised to exhibitors and contestants. Enthusiasm waned. In 1882, the booth of jeweler Louis C. Bernays was robbed at the fair, which eventually led to his business bankruptcy.

By 1884, the association didn't have the money to mount a fair. It rented out the fairgrounds for grazing and then sold the land.

First Fort Smith and then Pine Bluff re-branded their county fairs as state affairs until, in 1906, an energetic association formed at Hot Springs.

A decade later in Little Rock, the Arkansas Gazette quoted organizers of the Pulaski County Fair as aiming to build up their organization to take back the state fair.

Held at Forest Park, the 1916 Pulaski County Fair opened at 9 a.m. Oct. 16, but speeches by the governor, the mayors of Little Rock and Argenta and the head of a local automobile club were set for 2 p.m. Then would come a band concert, a balloon ascension and parachute descent, and at 9 p.m., fireworks, with the carnival open until midnight.

"It consists of two miniature farms, side by side, one an old-fashioned one with gullies in the soil, rail fences and the general run-down appearance said to obtain in the one-crop farms run on the old-time method," the Gazette reported. "The adjoining farm will show the same soil properly cultivated in diversified crops, terraced to prevent gullying, equipped with wire fences, free of weeds, and in all respects up to date."

Rain reduced turnout for the Oct. 17 automobile parade from downtown, which had promised more than 50 entries, including a car of women from the Political Equality League. The Gazette reported that far fewer paraded, and the suffragists won the $50 first prize.

Rain doesn't appear to have hurt the healthy baby contest, which drew 119 entries. We can guess the judges were looking for fat babies based on photos the Gazette published of four winners Oct. 26: Laura Elizabeth Shrode, Margaret Elaine Prather, Mildred Celeste Kirby and Curtis Hawley Stout.

Ministers Cause Closing of Fair

"Under a clear sky and with a large crowd on the grounds to witness the closing exercises, the most successful county fair ever held in Pulaski, from a standpoint of pretentiousness, was terminated last night.

"It was announced yesterday afternoon by the officials that the fair would be kept open today, but this was canceled when it was learned that objections had been raised by several Little Rock ministers. Officials of the fair said it was better to close the fair than to arouse antagonism. They closed of their own volition and were not ordered to close.

"The attendance figures this year were almost 50 [percent] less than last year, due to the bad weather during the first of the week.

"While our attendance figures were much lower than last year, we do not feel greatly disappointed," said John C. Small, secretary of the Pulaski County Fair Association. "We know that this year's fair was better than last year's. We could not help the bad stretch of weather the first part of the fair and for this reason we do not feel that the people are losing interest.

"Our exhibits were larger and better. We had a larger variety than ever. To Mrs. C.W. Garrison, for her excellent work in the baby health contest and to Hillory Jennings and the Little Rock Poultry Association, the fair association tenders its thanks. It was through them that two of the most interesting features of the fair were got up. We also tender our hearty thanks to the Rotary Club and to the county and city officials and to the people of Little Rock, who made the fair possible.

"We hope next year, with favorable weather conditions, to outdo anything ever attempted in the state."

Next week: Women Still Fall For That Old "Chain Game"