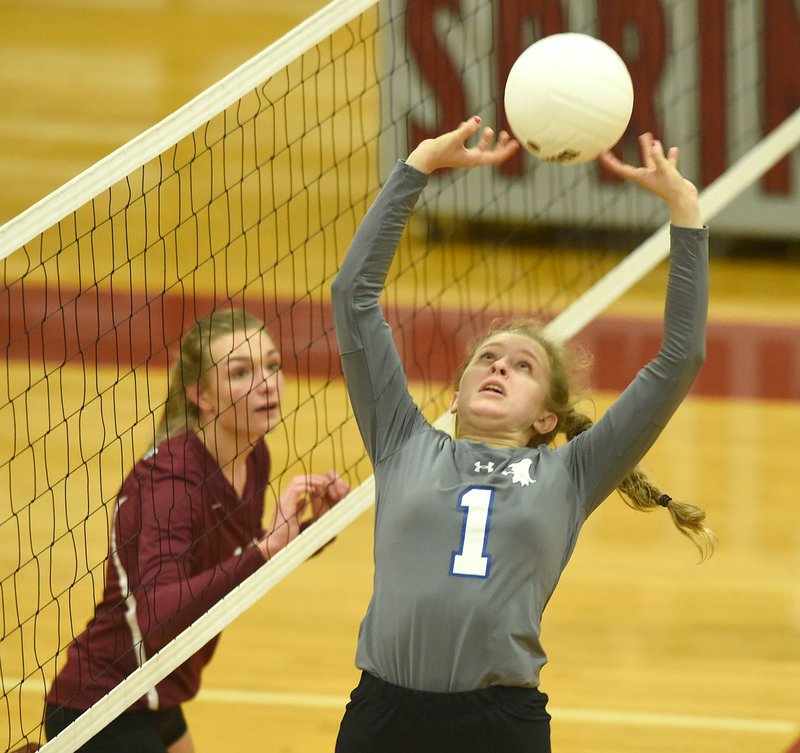 SPRINGDALE -- Springdale High needed a win over Rogers High on Senior Night and a Bentonville West loss Tuesday to earn a state tournament bid. The Lady Wolverines fell to Bentonville, but Rogers made the necessary plays late in sets to walk out with a sweep of the Lady Red'Dogs (25-22, 25-19, 25-14).

Coach Meagan Thompson's club will wrap up its season with a 6-19-2 mark, but in the final game of the season Springdale fought hard against the Lady Mounties, who will serve as the 7A-West's 4-seed in the playoffs.

"We're really excited about that," Rogers coach Christina Lawrence said. "We're the team in the conference that hasn't reached its potential yet so that's exciting for us. We're going to work hard the next week and I think we got a good seed."

Springdale battled Rogers for a majority of the night and, after falling behind 17-11 in the first set, rallied to take a 22-20 lead behind two consecutive kills from Keke Turner. Rogers, following a timeout, proceeded to tally the final five points to take a 1-0 lead.

The second set was more of the same as Springdale took a 15-14 lead after a Turner kill. The Lady Mounties then finished the set on an 11-4 run to take control of the match. Junior Maddie Tauai recorded three of her 11 kills during the spurt.

"She's been really big for us the last few games and at the Hollister tournament she was crushing it," Lawrence said of Tauai. "Now she's playing great, and she's carrying the team at times."

Rogers then capped the match in the third by equalling its run in the second set to sweep the Lady Red'Dogs. The Lady Mounties began play without a few starters Tuesday, Lawrence said, and felt her girls were nervous early on but closed the way she wanted.

"Typically Rogers has been the team that's kind of given up, but they got after it today," she said. "I thought they fought back well and played consistent at the end."

Springdale, although it will miss out on postseason play by one game, has talented underclassmen to build with going forward, and vastly improved over the course of the season, coach Meagan Thompson said.

"We have a really young team," she said. "We had two sophomores step up and the rest of them are juniors. We're going to build off that. I told them all it was awesome to work with them."

Tymber Riley had a team-high 15 kills and Emma Palasak added 10 more as Bentonville ended the regular season with a 25-10, 25-12, 25-16 victory over at Wolverine Gymnasium.

Tori Lowry had 20 digs and three aces while Baylee Barganier chipped in 26 assists for the Lady Tigers (20-15, 10-4), who will take the 7A-West Conference's third seed into the Class 7A state tournament next week at Springdale Har-Ber. Bentonville will play Cabot in the last of four first-round matches.

All was not lost for West (6-24, 3-11), which earned earned the sixth seed after Rogers swept Springdale and will play Fort Smith Southside in first-round action. Kerryann Ptacek and Kortney Puckett each had four kills, while Camryn Holly and Rachel Walls added three apiece for the Lady Wolverines.

The Lady Bulldogs clinched the top seed for the Class 7A Tournament with a 25-8, 25-17, 25-8 win at Van Buren on Tuesday in the regular season finale.

Fayetteville (27-6, 13-1 7A-West) faces the winner of Fort Smith Northside-Van Buren in the second round of the state tournament next week at Springdale Har-Ber.

Greenwood advanced to the championship game Saturday where it will host Russellville for the No. 1 seed from the West for the Class 6A State Tournament, which will be held Tuesday through Thursday at Lake Hamilton.

Siloam Springs, meanwhile, will play at Benton in the third-place game on Saturday. Russellville defeated Benton 3-2 on Tuesday.

Shaylon Sharp led the Lady Panthers (16-17) with 10 kills against Greenwood, along with 20 digs, four block assists and one ace. Chloe Price had seven kills, nine digs and 14 assits.