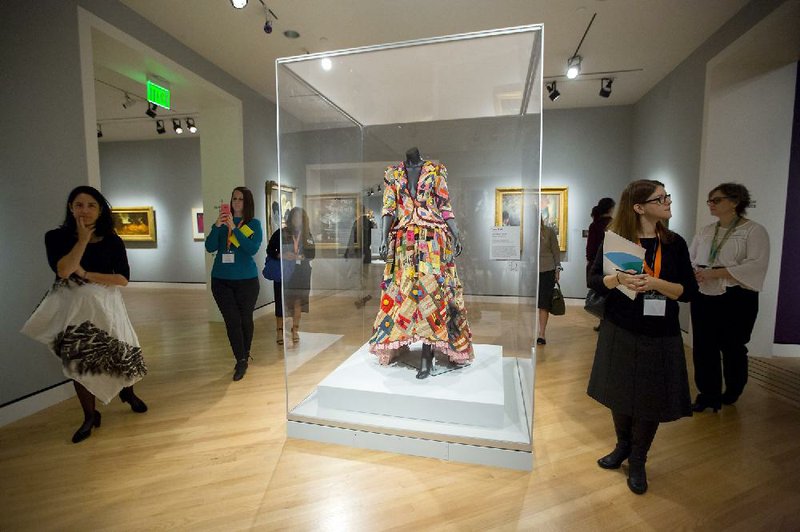 Visitors tour “The Art of American Dance” exhibit Thursday at Crystal Bridges Museum of American Art in Bentonville. The exhibit opens to the public Saturday and runs through Jan. 16.

The first major traveling exhibition exploring dance in American art will be on display at Crystal Bridges Museum of American Art beginning Saturday.

The exhibition, "The Art of American Dance," was organized by the Detroit Institute of Art and features 90 dance-inspired paintings, sculptures, prints and photographs dating back to the 1830s. The exhibition includes works from artists such as John Singer Sargent, Robert Henri, Mary Cassatt, William Merritt Chase, Nick Cave and Faith Ringgold.

"One of the connections we wanted to make in this exhibition is the hybridity of dance, the transformation of dance that can only happen in the United States," said exhibition curator Jane Dini, who participated in a media tour Thursday.

Dini, who began organizing the exhibition in Detroit in 2011, said the show includes works borrowed from collections around the country. Three pieces in the Crystal Bridges collection -- Cave's Soundsuit, Sargent's Capri Girl on a Rooftop and Marisol's Martha Graham -- also are on display.

"The Art of American Dance" has been divided into two sections at Crystal Bridges, according to assistant curator Alejo Benedetti. The first half features social dancing, while the second depicts professional dancers on stage.

George Caleb Bingham's The Jolly Flatboatmen, which was borrowed from The National Gallery of Art in Washington, D.C., serves as an introduction to the exhibition.

"This is an instance of social dance," Benedetti said of the painting. "But what's so fascinating and great about this is, he's also performing. He's on a stage. It alludes to what you'll see in rest of the exhibition."

Crystal Bridges is the final stop for "The Art of American Dance." The exhibition was on display in Detroit earlier this year before a three-month stay at the The Denver Art Museum.

"The Art of the American Dance" opens Saturday and will be on view at Crystal Bridges through Jan. 16. Tickets are $10 for adults and free for ages 18 and under and museum members. Admission is free every Thursday from 5 p.m to 9 p.m.