New pedestrian walkway connecting Arkansas, Memphis is bridge from past 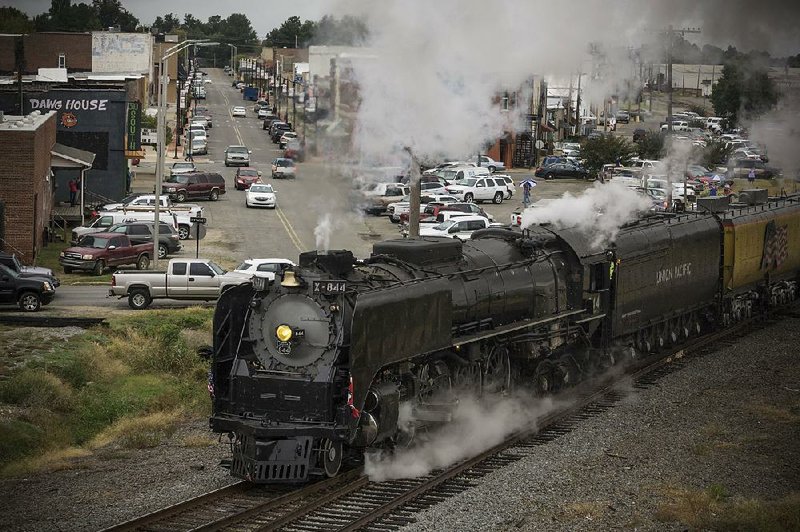 Union Pacific No. 844, the last steam locomotive built for the railroad, departs Paragould on Thursday as it makes its way to West Memphis for Saturday’s dedication and opening of a bike and pedestrian path on the Harahan Bridge. (Special to the Democrat-Gazette / DAVID HOGE )

Nearly 100 years ago, wagons and pedestrians could cross the Mississippi River between Arkansas and Memphis on two lanes of the Harahan Bridge. 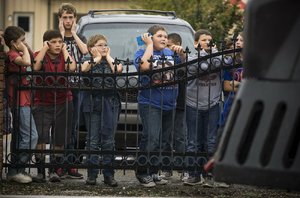 Photo by DAVID HOGE / Special to the Arkansas Democrat-Gazette
Students cover their ears in anticipation of Union Pacifi c No. 844 blowing its steam whistle Thursday during an appearance by the locomotive in Piggott as it makes its way to West Memphis for the dedication of a bike and pedestrian path on the Harahan Bridge. 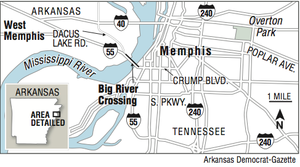 The crossing was open until 1949 when the Memphis & Arkansas Bridge on Interstate 55 was built over the river and the wagon crossing closed.

Now a new venue has been created for walkers and bicyclists to cross the river using the bridge. Called the Big River Crossing, the 1-mile walkway is attached to the north side of the Harahan Bridge and will open Saturday to the public.

It's the longest pedestrian walkway across the 2,230-mile-long Mississippi River, which runs from Lake Itasca in northern Minnesota to the Louisiana Gulf Coast.

Proponents of the crossing say it will boost tourism for Memphis and Arkansas' West Memphis and offer more entertainment and recreation.

"We want to make a memorable experience for those who cross this," said Paul Morris, Downtown Memphis Commission president and the project manager for the crossing. "We take the Mississippi River for granted here because we see it all the time. This is a different way of seeing the river."

Dignitaries from Tennessee and Arkansas will meet Saturday on their sides of the river to dedicate the walkway's opening. At noon, they will walk out and meet in the middle of the bridge for a ceremonial ribbon-cutting.

The walkway is part of a long-running project called Main Street to Main Street which connects the West Memphis and Memphis downtowns. Funded in part by a $15 million federal Transportation Investment Generating Economic Recovery Grant, the project includes landscaping upgrades and improvements to Memphis' trolley service, as well as lighting, shrubbery and a 5-mile walking nature trail in West Memphis.

The director of West Memphis tourism, Tim Jackson, has said the bridge will draw people from the Memphis downtown to the Crittenden County town for food and recreational opportunities.

The Harahan Bridge is the centerpiece of the project, and the walkway serves as a metaphorical salve for a feud that kindled when the bridge was first built.

According to historians, 20 years after the Frisco Bridge over the Mississippi River in Memphis opened in 1892, train traffic had increased so much that a second bridge was needed. Memphis Mayor E.H. Crump met with railroad officials, creating bitter feelings in Arkansas, where leaders felt they did not have enough input on the plans.

Newly elected U.S. Rep. Kenneth McKellar of Memphis also threatened to block the Harahan construction permit in 1912 if it did not include a wagon crossing and a pedestrian walkway.

The Harahan Bridge was built 200 feet north of the Frisco Bridge and opened to train traffic July 14, 1916.

Because of construction problems with wooden viaducts in Arkansas, the wagon crossing did not open until Sept. 17, 1916.

Work began on the $18 million walkway in 2013, Morris said. Crews built the 10-foot-wide aluminum walk across the steel beams of the Harahan Bridge trestle. There is a 54-inch-tall fence on the walkway's north side, but the walkway provides clear views upstream of the Memphis skyline, the Arkansas landscape and the churning Mississippi River 150 feet below.

"It's an awesome look," Morris said. "Seeing it from the banks of the river is impressive, but watching barges go underneath when you cross it is amazing."

The walkway also will serve as a crossing for workers, Morris said.

A 47-year-old Memphis man was killed on Interstate 55 in August 2012 when he has struck by a truck as he rode a bicycle home from his job at a West Memphis restaurant. The Interstate 55 bridge has an emergency lane, but police said the bicyclist was probably too close to the traffic lanes when he was hit.

The man often traveled across the bridge to work on weekends because there was no bus service between the towns.

"This will serve a purpose for those who do not have cars," Morris said. "This is the only safe crossing for bicycles on the lower Mississippi River.

"The crossing is fun, but if we had it then, that man may have lived."

Saturday's events will begin at 10 a.m. on the Arkansas side of the river. Shuttle buses will take people to the walkway's entrance on the western side of the river beginning at 9 a.m., said Cara Greenstein, a spokesman for the Big River Crossing.

Union Pacific's "Living Legend" No. 844 steam locomotive also will travel 1,200 miles from Wyoming to celebrate the bridge's opening and will be there from 9:45 to 11:30 a.m. Saturday.

"It's quite majestic when you're on the bridge when a train passes [on the Harahan]," Morris said. "There's no other example of a crossing like this next to an active railroad line on the river."

Print Headline: New walkway is bridge from past