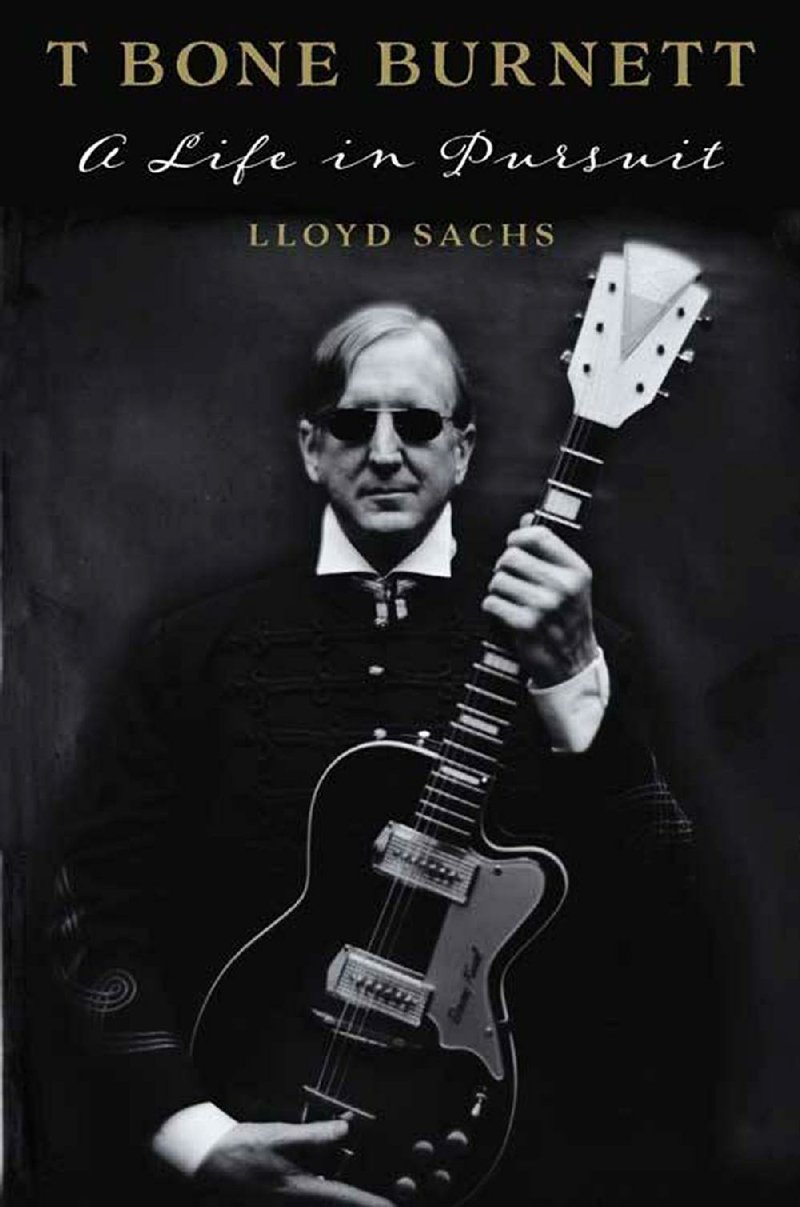 T Bone Burnett: A Life in Pursuit by Lloyd Sachs

"It used to be, in the '60s, when people said that all [rock 'n' roll] music sounded alike, they were wrong. But now, when people say that, they're right. That's because it all comes out of a big machine, and everybody uses the same machine."

Well, I got the Bruce Springsteen book.

It's, um, really good: generous, humane and honest. The guy can write. He's sounded the human heart. It's exactly what I expected it to be.

But it's No. 1 on the best-seller lists and has been heavily reviewed already. I'd rather take my time and read it. Other people have used words I'd probably use. "Solemn" is one. "Tender" is another. That's what Richard Ford said -- and that's why I try never to read reviews before I write my own.

Besides, sometimes it's wise to counter-program. Not nearly as many people have heard of Lloyd Sachs' new book T Bone Burnett: A Life in Pursuit (University of Texas, $26.95) as Springsteen's Born to Run, but it might be argued that Burnett is nearly as important in American culture as the Boss.

A case can be made for Burnett as one of the founders of the Americana movement and he has produced some of the most compelling and profound (yes, profound) pop music of the past 40 years. He may be best known for his work in producing the soundtrack for the Coen brothers' 2000 film O Brother, Where Art Thou? (which is widely credited with restarting the American roots music movement). Just as impressively he helped the Coens capture the feeling of the pre-Bob Dylan Greenwich Village folk scene in 2013's Inside Llewyn Davis.

He's also a tremendously effective singer-songwriter, although he has never achieved the commercial success that some (including me) predicted for him. Over the past 35 years I've talked to Burnett a few times and have written plenty about him; I consider myself well-versed in his story. But Sachs' book -- which covers Burnett's career from his days as a 17-year-old with his own studio in Fort Worth (where he was one of the co-conspirators behind the Legendary Stardust Cowboy) to his recent work for HBO and his problems with digitalized music -- told me plenty I didn't know.

So I contacted the Chicago-based Sachs to have a conversation about the book.

Q. While you address this in the book, can you talk about why you thought this book was necessary?

A. For starters, no one previously had written a book about one of the major figures in American popular culture of the past few decades. I also was increasingly impatient with the large percentage of self-professed fans who were unaware of his distinguished work as a singer and songwriter. I mean, when a club owner friend in Chicago who butters his bread with roots artists confessed to me that he didn't know T Bone had recorded his own music, I knew there was at least one compelling reason to write the book.

Q. A friend of mine knew and recorded with "Terry" Burnett in Fort Worth in the '60s. He says that the young T Bone was a completely formed and nonimitative musician by the time he was 19 and that he had no illusions about the marketplace or pop music's role in it. (Apparently he used to lecture starry-eyed idealists.) This wised-up character seems a little at odds with the 68-year-old T Bone, who expresses an unalloyed belief in the transformative power of art. ("He was so much older then ...") Does this seem to jibe with the Burnett you know?

A. I don't see those two outlooks/approaches as opposing, and neither does Burnett. Like Alfred Hitchcock, to name a visionary in another field, Burnett recognizes that the lines that get drawn between "art" and "entertainment" are flimsy. The greatest art can appeal to the commercial masses and the greatest entertainment can rise to the level of art. Burnett got into trouble when he compromised and in some ways overcalculated his work in the studio to make it more salable -- only to achieve no such commercial breakthroughs. As discussed in the book, he was far more successful making other artists, the ones he produced, successful.

Q. Around the time O Brother was coming out, Burnett told me he was moving away from producing in order to concentrate on his own songwriting and recording. While he never obtained the kind of breakthrough success as a performer that he sought, I wonder if he hasn't actually been more influential behind the scenes; there are literally dozens of records I think of as T Bone Burnett records.

A. Yeah, I have never thought of [2007's] Raising Sand as a Robert Plant-Alison Krauss album; without his contribution it would have been a far different album, and likely a less remarkable and successful one. As great a talent as [Burnett's ex-wife, singer] Sam Phillips is, obviously her contribution on her [Virgin] recordings is inseparable from his. Who knows? Maybe she would have been more commercially successful with another producer, but likely at the cost of several masterpieces.

It's hard to gauge influence. I can say with great certainty that Joe Henry would not have become the distinguished producer he is had he not been mentored by Burnett. Henry himself says as much. But there are any number of artists who have done their best work with Burnett and chosen not to work with him again -- or, as in the case of BoDeans, learned their lesson and attempted to return to the T Bone fold. You know, if Diana Krall was so happy with the album she did with him, why did she subsequently run into the arms of one of the slickest Hollywood producers for her follow-up record?

What Burnett represented and represents still to many so-called roots artists is the gold standard of authenticity. The last thing they're going to get working with him is compromised or taken out of their natural element. Some of his experiments don't translate into commercial success, but for artists like Jimmie Dale Gilmore and Gillian Welch, pushing the envelope with him in the studio was a valuable and enriching experience.

Q. I've only seen T Bone play live once -- he played a show with Phillips at Hendrix College and it was tremendous, though under-rehearsed; there was some confusion over who would sing what parts. But I've heard conflicting reports -- he's been described as a terrific showman and as suffering from stage fright.

A. Burnett is never comfortable appearing before the public in any guise. And that excess in his early performances likely was a matter of overcompensating for his shyness. But as he has matured, he has thrived as a performer in the company of musicians he's close to and as the leader of a rock band. He just played the Hardly Strictly Bluegrass Festival in San Francisco, which he does every year. I would love to have seen those sets.

Q. Production aside -- and I rather like the way it sounds, possibly because it's what I heard first -- Burnett's 1983 album Proof Through the Night is at least a great collection of great songs. "Shut It Tight," "Fatally Beautiful" and "Baby Fall Down" are just wonderful and even something like "Hefner and Disney" still manages to hold my interest 33 years on. I honestly think it's one of the best records of the '80s -- and I don't really understand why he seems to dislike it so much. You touch on this in the book, but can you expand on it?

A. Who can explain why certain artists are perpetually dissatisfied with efforts other people embrace, the way you and others embraced Proof? Why does Spielberg feel the need to tweak, re-edit or add footage to films that were perfectly fine in their original theatrical release? In this case, a lot of his dissatisfaction may owe to the fact that he didn't have control of the finished work and was at the mercy of studio executives who had no clue what was best for the music. Keep in mind that the album started out as more of an acoustic live-in-the-studio effort along the lines of his 1986 Dot album T Bone Burnett, which some people hold above all others. In the end, you have to go with what T Bone himself said about the album, that he was unhappy with the production, particularly certain cloying echo-ey effects.

Q. Reading the book, I got the feeling Burnett was sitting right beside you -- not interfering, and being helpful to a point -- as the book unspooled. It must have been strange not to interview him for the project. While I've always believed you should trust the work more than the artist, do you have any feeling as to why he preferred to demur? He's a fascinating talker, and as far as I know, he has never been microphone shy.

A. Yeah, that's the $64,000 question. Having interviewed him several times and been in his company on other occasions, I can attest to his warmth and charm. I have to believe what Sam said: that he is skittish taking a backward view of his life and work at a time when he has got so much yet to accomplish and a diminishing amount of time to do it.

Q. The concept of pursuit -- as reflected in the book's title -- is really wonderful. Can you delineate the difference between a pursuit and a career?

A. I wouldn't presume to speak for Burnett, but the way I view it is that a pursuit is open and endless and continually [self-] renewing, true to the Zen concept mentioned in the introduction. You exist in the moment, in constant pursuit of truth and other high ideals. Whereas a career is defined by events that largely exist in the past and are viewed in terms that don't have anything to do with the spiritual/creative flow that produced them.

Q. Much of the book deals with the seismic shifting of options for those trying to be heard and possibly sell their music in today's market. Are there any new successful models Burnett's observed in his research and experience?

A. On a panel at this year's AmericanaFest, he said he's working on a new storage system that will provide a breakthrough alternative to analog and digital; he wasn't yet at liberty to discuss, he said.

He has a new video series coming on Spotify, an interesting wrinkle considering his warnings to young musicians to avoid the internet like the plague. He reserves his animosity for YouTube and Google.