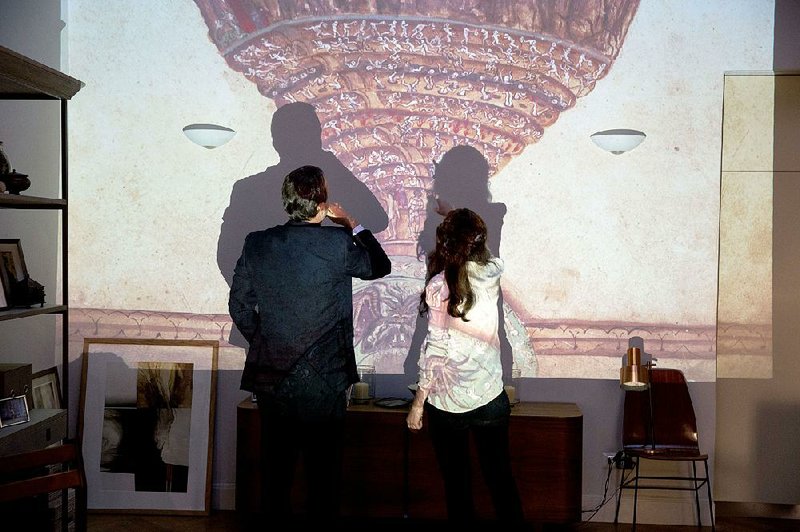 After Robert Langdon (Tom Hanks) wakes up in an Italian hospital with amnesia, he teams up with Dr. Sienna Brooks (Felicity Jones) to foil a global plot in Inferno.

On one hand, Dan Brown's thriller novels about Robert Langdon, a world-renowned "symbologist" who travels the world solving art-related conspiracy mysteries, and the subsequent movies made from his books, can at least suggest to neophytes the wealth of the world's great cultural heritage and art. It might be the closest a reader will actually get to the momentous treasures of the Louvre, even if it's only to watch Dr. Langdon run through it in the midst of solving another perplexing puzzle. On the other hand, however, there's something almost obscene about Brown using some of humankind's greatest artistic achievements as a backdrop to his ludicrous storytelling, like using the collected works of Tchaikovsky as a means of moving timeshares, or selling Coke Zero. 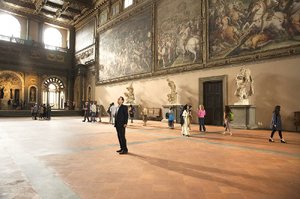 Robert Langdon (Tom Hanks), the world’s foremost expert on deciphering cryptic symbols embedded in great works of art, races from Florence and Venice to Istanbul to save the world from a diabolically complicated plot in Ron Howard’s Inferno.

In the beginning of this film, we find our good doctor -- again played by Tom Hanks -- suddenly waking up in a hospital bed, a nasty gash on his forehead, hallucinating vague images of hellish landscapes and twisted-up people drowning in fiery blood. Lying there thoroughly confused, he is met by his beautiful ER physician, Dr. Sienna Brooks (Felicity Jones), who explains that he was grazed by a bullet somehow, and has endured "mild retrograde amnesia," (she could just as easily have said "mild retrograde plot device") leaving him bewildered, groggy and unable to explain why he's in Florence, Italy, in the first place.

As it happens, he's not given much time to contemplate his situation, because shortly after waking up, an assassin (Ana Ularu) dressed in an Italian police uniform suddenly appears in the hallway, firing rounds at everything that moves, and heading straight for him like the T-1000. He escapes with Dr. Brooks, but is still plagued by grogginess, hallucinations and an inability to conjure the word for coffee. (It should be noted, however, that the second a cryptic painting is projected on the wall of Dr. Brooks' apartment, he instantly calls out "Botticelli" and starts reciting myriad details about the Inferno painting that only he, the world's greatest art historian, could possibly deign to know.)

Before too long, it becomes clear to the duo that a half-mad billionaire, Bertrand Zobrist (Ben Foster), convinced of the impending overpopulation doom of the planet, has planned the release of a super-communicable pan virus to wipe out half the world's human inhabitants. Naturally, only through a series of elaborate clues hidden in various significant works of art can the professor uncover where the device is set to go off. No, seriously. That's the plot.

Throw in several potentially nefarious groups, including a fully-armed World Health Organization consortium led by a steely director (Sidse Babett Knudsen); a potential rogue agent (Omar Sy); and, most curiously, a super-secret private security firm, running out of a large cruise ship somewhere in the Adriatic Sea, run by the mysterious Harry Sims (Irrfan Khan), whose company performed a lot of work for Zobrist only now to realize the full, dastardly plan of their now-defunct client.

Through it all, there's Langdon and Brooks, sprinting pell-mell through some of Italy's greatest cultural landmarks like a pair of hysterical tourists trying to take in everything before closing time. They move from Florence and Venice to Istanbul to seek clues, search for the fabled death mask of Dante (whose best-known poem is the inspiration for the film's title, among many other things), and weave and bob through secret entrances and hidden terraces of ancient museums. Things eventually get twisty, Langdon gets knocked around a bunch more, secrets are revealed, and we are whisked past glimpses of great art en route to yet another ridiculous plot point.

It's a formula that has worked wonders for Brown and, it's true, he deserves some credit for taking a subject considered as dry as a saltine under a heat lamp and turning it into (reportedly) page-turning, pulse-pounding mystery thrillers. But the difficulty in creating new art-based conspiracy scenarios for Langdon to solve is evident in the laborious extrapolation of the plot, which creaks and groans under its own weight like a wooden suspension bridge. It's not quite at the level of Tom Clancy's ridiculous Jack Ryan character, who defeats giant cadres of anti-American agents with little more than his gumption and a light-colored windbreaker, but it's not terribly far off.

As always, Hanks plays likable better than most actors, and his chemistry -- thankfully, nonromantic -- with the ephemeral Jones is enough to keep the film from grinding to a halt, but as the pair escape from scrape after scrape, pursued by trained killers and government agents, and somehow always eluding capture on the flimsiest of premises, the whole thing becomes more and more silly. It's not a question of being believable, per se -- no one needs to go into a thriller and start questioning the protagonist's choice of footwear -- but other than the momentum of the chase, and the flashes we get of spectacular museums and cathedrals, there's not much else to propel us forward. There's certainly not anything to suggest Langdon's inner life; like everyone else in the film, he's a plot propulsion unit and little else.

Another aggravation is the nature of the setup of the mysteries: Langdon is so quick to solve everything -- usually accompanied by a rushed explanation that gets hurled past as they run to the next clue -- that you have no time to take them in for yourself. You can't solve anything, even if you have a background in history, because the film takes such great pains to set Langdon up as the authority on All Things who must be given solo credit for unpacking the great mysteries before him. As such, it's like watching someone else playing a video game -- it looks like it might be fun from a distance, but that's as close as you're allowed to get.