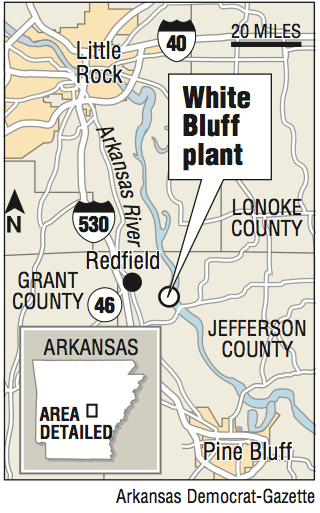 A map showing the location of the White Bluff plant.

The U.S. Environmental Protection Agency has finalized its plan to reduce haze in national wildlife areas in Arkansas, a plan that state officials continue to oppose.

The EPA expects Arkansas to submit its own plan later that still would have to be approved by the EPA. But the federal agency's plan under the federal Regional Haze Rule goes into effect two months after it's published in the Federal Register, which is expected to occur in two weeks.

The EPA and the state Department of Environmental Quality have disagreed over the inclusion of certain power plants among the facilities that would be required under the plan to reduce emissions.

Under an earlier proposal, utilities estimated the cost of compliance to be at least $2 billion -- mainly for the cost to update two Entergy Arkansas coal plants -- but the EPA put the costs of compliance at nearly $500 million. Entergy Arkansas has proposed mitigating some of the costs by closing its 1,700-megawatt White Bluff coal plant near Redfield and eventually replacing it with natural gas or renewable energy sources.

The Regional Haze Rule sets requirements for visibility at 64 national wildlife areas across the country and allows the EPA to require emissions reductions at industrial facilities that emit chemicals that contribute to haze.

On Thursday, Arkansas Gov. Asa Hutchinson said in a statement that the final EPA plan was "unsupported federal overreach" and argued that the restrictions on emissions will have "no appreciable effect on regional haze and improved visibility."

In public comments earlier this year, officials from Entergy and other power providers, as well as consumer groups, voiced concerns that expenses incurred in complying with the federal mandate may fall on the backs of electric customers.

"The driving concern for Entergy Arkansas is that any costs resulting from the proposed rule not unfairly or adversely affect our customers and co-owners," Entergy spokesman Sally Graham said in published reports.

Arkansas Department of Environmental Quality Director Becky Keogh said the final plan did not address the concerns raised by the department, including the department's belief that the 1,700-megawatt Entergy Arkansas coal plant near Newark should not be included in the plan. It also did not consider Arkansas' improving air quality, Keogh said.

"Arkansas is going to achieve the regional haze requirements well ahead of schedule," she said.

Keogh said the state is working on a plan and would have to seek a stay on the federal plan in court to keep the federal plan from going into effect before the state plan is released. A state plan could take six months to more than a year to implement, Keogh said, because it would require a rule-making process to change state regulations.

Keogh noted that federal plans have been stayed in court in Texas and Oklahoma, and said Arkansas is in a good position to challenge the EPA's plan in court, particularly because of the inclusion of the coal plant near Redfield.

"We think the plan that we issued is what the law required us to do," said Guy Donaldson, chief of air planning for EPA Region 6 in Dallas.

But state officials oppose including Entergy Arkansas' 1,700-megawatt Independence County coal plant near Newark in the plan, arguing that it was not required to be in the plan because of its date of construction.

Donaldson said EPA officials felt it necessary to include the Independence plant because of a part of the Regional Haze Rule that says planning agencies must consider the "reasonable progress" in air quality that can be achieved by reducing emissions at certain facilities.

The Independence plant "is the second-largest source of [haze-causing] SO2 emissions in Arkansas," Donaldson said. SO2 is sulfur dioxide.

Ultimately, Donaldson said, the EPA would prefer that states produce their own implementation plans for dealing with regional haze, given the local nature of the power plants and the emissions they discharge.

The final plan released late Wednesday comes after years of work by state and federal agencies to implement the Regional Haze Rule that Congress passed in 1999 as part of the Clean Air Act.

The EPA's final plan details a few changes, including a faster timeline for three coal plants in the state -- Flint Creek near Gentry, White Bluff near Redfield and Independence -- to install low-nitrogen-oxide burners. It requires those burner installations in 18 months instead of three years. Donaldson said the time frame was shortened because of comments from environmental groups that noted that burners can be installed in less than a year.

The plan also changes some of the emissions requirements, leaving them substantively similar but easier for utilities to comply with, Donaldson said, and gives Domtar paper mill five years instead of three to comply with the rule while it transforms its Ashdown mill into a mostly pulp mill.

Keogh said Thursday that some questions remain as to the requirements for the Domtar plant and whether the EPA accounted for all of the measures that had already been taken at the plant to reduce emissions.

The Regional Haze Rule seeks to improve visibility at 64 national wilderness areas by 2064 by mandating the reduction of the compounds that contribute to haze -- sulfur dioxide and nitrogen oxide -- from the facilities that emit those compounds -- often, coal-fired power plants. The rule is to be implemented in 10-year planning periods. The first planning period runs from 2008-18.

While proponents of the rule and the subsequent emissions restrictions on coal plants have argued that the rule will have an impact on air quality and respiratory health among nearby residents , the rule concerns only visibility, and the EPA can consider only improvements to visibility in its implementation of the rule.

The EPA noted in a news release that sulfur dioxide and the fine particles that can form in sulfur dioxide's interaction with surrounding air have been linked to "increased respiratory illness, decreased lung function, and even premature death."

The Arkansas Department of Environmental Quality is in charge of improving and monitoring visibility in Caney Creek and Upper Buffalo wilderness areas in Arkansas, and the Hercules-Glades Wilderness area and the Mingo National Wildlife Refuge in Missouri.

In 2014, the Sierra Club sued the EPA over not issuing a plan for Arkansas after partially rejecting the Arkansas Department of Environmental Quality's proposal for a state plan two years earlier. In April 2015, the EPA issued the first draft of its plan, which was then opposed by utility groups, industrial consumers and the state. After a series of motions in court over the plan, with the state requesting that the lawsuit itself be dismissed entirely, U.S. District Judge Leon Holmes ordered in November that the EPA could extend its deadline to issue a final plan to Aug. 31.

On Thursday, the Sierra Club -- a national environmental group with hundreds of members in Arkansas -- released a statement calling the EPA's final plan a "big win for Arkansas."

In response to the EPA's April 2015 regional haze draft implementation plan, Entergy Arkansas proposed shutting down the White Bluff plant, if the plant were included in the final plan.

The proposed shutdown, by 2028, is to avoid what the utility estimates will be $1.1 billion in compliance costs for the plant, which will reach the end of its life in the early 2030s. The White Bluff plant employs 105 people, already down from more than 300 who worked there when the plant was first built. It's bordered to the north by Redfield, a growing town of 1,500 off Arkansas 365 in Jefferson County. The Independence plant near Newark employs 106 people.

Asked Thursday if the utility had plans to officially close the White Bluff plant or to consider closing the Independence plant, utility spokesman Julie Munsell said, "We will be reviewing and considering all of the options regarding possible next steps in the process."

The Sierra Club supports the closure of the White Bluff plant and the equally large Independence plant. Those plants make up the majority of coal-power production in Arkansas. The Flint Creek and Turk plants make up only 1,123 megawatts combined.

The plan, and any state plan that may be issued later, reflect the challenges and opportunities in a changing energy and regulatory landscape.

The federal Clean Power Plan, the implementation of which has been temporarily halted by a federal appeals court, further seeks to reduce the use of coal to generate electricity through additional regulations that would reduce carbon-dioxide emissions that contribute to climate change but effectively increase the cost of using coal for electricity generation.

But as natural-gas prices have been low and renewable energies are becoming more affordable, utilities in Arkansas and nationwide have been relying less on coal-fired plants. Combined with compliance with previous federal regulations in the energy and automobile industries, the result has been lower emissions of sulfur dioxide and nitrogen oxide, and improved air quality by some EPA metrics.

In an August 2015 report, Entergy Arkansas told the state Public Service Commission that it plans to increase its electrical output by 2,000 to 6,000 megawatts in the next 20 years by using natural gas, and solar and wind power.

Going forward, the EPA's planning in Arkansas is finished with regard to regional haze, unless the state submits a plan that the EPA will have to review.

"We did a proposal, we held public hearings," Donaldson said. "So this is the end of our process. Now it's up to the sources that are affected by this plan [to implement it]."