Harley and the Davidsons tells of 'hog' underdogs 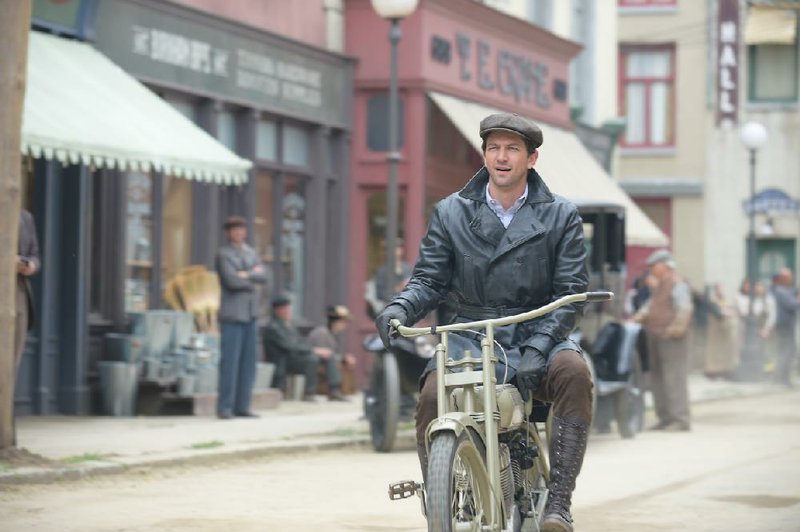 Michiel Huisman in The Discovery Channel series Harley and the Davidsons

One of the benefits of having basic cable branching out with new material is that we get the occasional nifty miniseries with outstanding actors and fascinating stories.

It should come as no surprise, then, that Discovery Channel has a new miniseries that's well worth our time. It has thrills, chills and romance, along with a healthy slice of Americana.

Harley and the Davidsons is a three-part miniseries (naturally, Discovery labels it an "event") premiering at 8 p.m. Monday on Discovery. Parts 2 and 3 follow at the same time Tuesday and Wednesday.

Beginning in 1903, the miniseries is based on a true tale and traces how Walter Davidson, along with his brother, Arthur, and their best friend Bill Harley, combined their talents to build what has come to be the global brand phenomenon that is Harley-Davidson.

It's an all-American story.

"The road to success was not exactly smooth," Discovery press material says. "It was filled with innumerable obstacles, ruthless competitors and extraordinary risks. Together these three young men, the sons of blue-collar immigrants, gave everything they had to ensure the survival of the company they founded."

Rich Ross, group president of Discovery Channel, Animal Planet and Science Channel, calls the miniseries "compelling and honest storytelling" and adds, "It is a story about brotherhood, an ironclad will to succeed and going against the conventional wisdom of that time. The founders of Harley-Davidson created more than just a motorcycle. They created modern entrepreneurism."

Trivia: The Harley-Davidson label "the hog" was coined by legendary team racer Ray "Kansas Cyclone" Weishaar (played by Wilson Bethel), who was known to take victory laps holding the team's pig mascot. Weishaar died after hitting a wooden wall in a race in 1924.

Kudos to Discovery for meticulous attention to detail, from the period costumes to the thrilling, but extremely dangerous, motorcycle competitions that were sweeping the country at the beginning of the 20th century.

Outstanding actors? The miniseries tapped Game of Thrones for two of the principals.

Playing an important role in the first episode is Gabriel Luna as motorcycle racer Eddie Hasha.

The miniseries does an outstanding job in capturing the social and technological changes that were taking place in the early 1900s. It was a time when one's life savings were gambled and fortunes were made and lost overnight.

Each of our three main characters faces different challenges, but it was their combined dream of the perfect motorcycle that united them.

For Walter, the venture "was a chance to escape from the confines of society -- to ignore the rules and build a bike that could go anywhere and ride hard."

For Arthur, the youngest for four brothers and viewed as the slacker/dreamer of the family, it was an opportunity to make a name for himself and show his parents and brothers that he was worthy of the Davidson name.

For their friend Bill, the ground-breaking motorcycle was a chance for him to get out from under his overbearing parents and to apply his obvious genius as an engineer.

The first Harley-Davidson motorcycles, built in a cramped shed in Milwaukee, were little more than small motors on bicycles, but that quickly changed as they were upgraded and strengthened to go anywhere and survive nearly every condition imaginable.

It was Walter who put the early bikes to the test. Ambitious and daring, Walter becomes a top performer while racing in the dangerous competitions that popped up around the nation.

Discovery tells us, "Walter's daredevil exploits put Harley-Davidson on the map and pushed the company to eventually overtake their arch rival competitor, Indian, which had a stronghold on the market."

In the beginning, Harley-Davidson was the scrappy underdog. It took surviving the Great Depression by using ingenuity and design along with Walter's innovative business ideas to turn the company into what we know today.

Harley and the Davidsons tells all of that and more.

Print Headline: Harley and the Davidsons tells of 'hog' underdogs