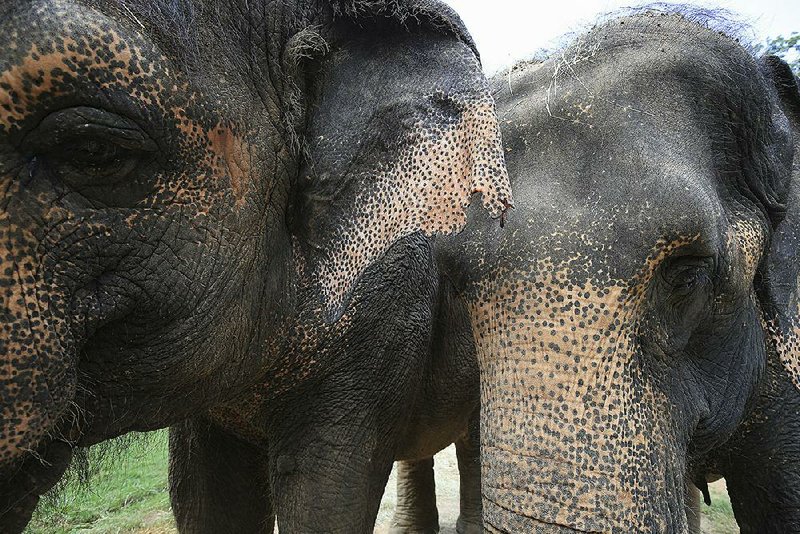 Elephants Babe (left) and Sophie wait to be fed carrots by their keepers Thursday at the Little Rock Zoo. Sophie, 47, is suffering from an incurable uterus infection, said Kristin Warner, the zoo’s elephant manager. ( Staton Breidenthal)

Sophie is more sluggish than usual, but the elephant still makes her way to the gate of her enclosure at the Little Rock Zoo when her keepers arrive with a bucket of treats. 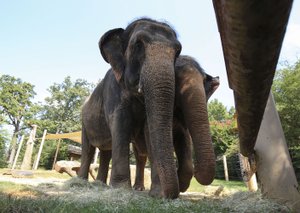 Photo by Staton Breidenthal
Elephants, Babe (left) and Sophie, spend time Thursday at the Little Rock Zoo in their enclosure.

She reaches out her trunk to be handed fresh-cut apples, carrots and sweet potatoes. When she and her exhibit mate, Babe, empty the bucket, Sophie finds a stick to chew on. Even though the food is gone, she sticks around while the humans talk, seeming to enjoy their company.

In her prime, the now 47-year-old Asian elephant performed circus tricks for the Ringling Bros. and Barnum & Bailey Circus. She retired from circus life and moved to a zoo in Illinois in 2000. That exhibit closed after 13 years, and she and Babe, now 41, moved to their new home in Little Rock to be companions to Zina, 56.

It is there they are expected to die.

In Sophie's case, because of a uterus infection that isn't curable in elephants, zookeepers fear her death may be sooner than later.

Three elephants have died at the Little Rock Zoo in the past five years, causing some uproar from animal-welfare groups, but dying is essentially what the elephants were taken there to do.

Little Rock only takes in geriatric female elephants because of its exhibit setup and size.

"We consider ourselves like a nursing home for older female elephants. We're not really set up for males. Not many facilities do take in older elephants strictly," said Kristin Warner, the zoo's elephant manager.

"Longevity of elephants is not well understood. Most of the information available comes from African elephants," said Fran Lyon, the Little Rock Zoo's general curator. "Recent data from scientists studying wild African elephants suggests that they rarely live to 50 years old, with most living to their mid- to late 40s. The longevity record for an Asian elephant in captivity is 86 years.

"There is not enough consistent data available on wild Asian elephants to accurately estimate their life span; however, it is thought that Asian elephants typically live into their mid- to late 50s," Lyon said.

In 1954, the zoo got Ellen at the age of 2. It's the only time the zoo has ever gotten a juvenile elephant, and she lived to be 60. Ellen died from heart complications and a stroke in 2011.

Her companion, Mary, also died that year, at age 61. Mary had to be euthanized because of colon cancer a few months before Ellen's death.

In 2013, Jewell -- who was brought in with Zina after Mary's death -- was euthanized after her keepers found her on her side and unable to get up. She is thought to have had a stroke. She was 63.

The elephants were all past their life expectancy. When an elephant at the Little Rock Zoo dies, its body is taken to a discreet burial site out of town that even most zoo employees and officials don't know the location of because people have been known to dig up the animals for their valuable tusks.

Sophie is much younger than the other elephants that have died in Little Rock, but she's suffering from pyometra -- an infection of the uterus. Her health has been up and down in recent months. Warner had to stay overnight with her twice during a recent weekend.

The uterus infection is common in dogs and can be cured in them by removing the uterus. But for elephants, surgery isn't an option because of their size and thick, tough skin, which doesn't heal quickly.

So for Sophie, Warner's job is to keep her as comfortable as possible. Blood samples are taken weekly for testing, antibiotics are given and zoo keepers try to keep her hydrated.

"We treat them very much like our family," Warner said. "I'm not from here, I don't have any family here, so these guys are my family. I'm here holidays, snow days. It's a huge commitment. A lot of people don't realize. I'm up here weekends -- there's really no time off."

Warner arrives at 7 a.m. to feed the elephants before they are released into their yards, where they do 30 minutes of walking and exercise. The barn where they sleep overnight is cleaned out, and each elephant gets a bath. During the day they have hay to graze on and limbs to play with -- the branches are cut from trees at public parks and taken to the zoo for the elephants, who like to eat the bark.

There's a pool the elephants can wade in and large mounds of dirt to lean against for a nap -- it's easier for them to get up that way, Warner explained.

The elephants get another round of exercise before Warner leaves at the end of the day. She returns to the zoo each night around 9 p.m. to check on them one last time before bed.

In some ways, elephants are similar to dogs. They like to play and be shown attention, and each has its own personality. They even like to be scratched behind the leg and on the buttocks like canines.

Sophie likes to show her dominance over Babe, who is more submissive despite being larger. Babe is about 10 feet tall and weighs 10,500 pounds. Sophie is about 8 feet tall and 8,100 pounds.

Zina, the oldest yet smallest at 6,200 pounds, is less social. She and Sophie are both dominant and tend to fight when they are together, so Zina is kept in a yard by herself, separated by a fence from Sophie and Babe. Babe and Zina interact through the fence.

"We certainly do not see them as pets, but we are attached to them," Warner said. "It's pretty easy to get attached to an elephant. They all have different personalities. They form a bond with their keeper. They know their name and different commands.

"I traveled 800 miles away from my family to take care of them," she said. "It's hard when you see them sick and not feeling well, but it's also so rewarding when you see them running around healthy, playing, chasing guineas."

The Little Rock Zoo has been criticized over the years after the deaths of its elephants by In Defense of Animals, a California-based animal-welfare group. The organization named the zoo No. 3 on its 2013 Top Ten Worst Zoos for Elephants.

The group said Little Rock's elephants should be retired to a sanctuary because the animals fare poorly in captivity where there is limited space.

"One factor is elephants don't get enough room to exercise and because of that develop captivity-related diseases such as foot infections and arthritis," the group's spokesman Nicole Meyer said at the time.

Zoo officials dismissed the complaints, saying the organization is a radical group that uses exaggeration and manipulation to support an agenda to shut down zoos.

It's natural that older elephants die, and since Little Rock only takes in older elephants, their deaths will come sooner than if the zoo were to get them as juveniles, Assistant Zoo Director Susan Altrui said when the group's list came out.

"The median life expectancy for humans is 77.5 years of age, and at the age of 77.5, many people suffer from chronic diseases and health issues, such as arthritis. The same is true of animals. The older they get, the more likely they are to experience health problems," Altrui said.

When the Niabi Zoo in Illinois was looking for a new home for the aging Sophie and Babe, it hired expert Alan Roocroft to do a search.

Roocroft concluded that Little Rock was best-equipped to address the unique health needs of Sophie and Babe due to their age, arthritis and weight.

"We were looking for a place where Sophie and Babe could comfortably live out the rest of their lives in a warm climate, under the direction of experienced people, as [short a] distance from Niabi as possible. ... I believe we found one in Little Rock Zoo," Roocroft wrote in his report.

Because elephants are social animals, the Little Rock Zoo tries to keep more than one, replenishing its herd through agreements with other zoos that seek to find new homes for older female elephants.

The zoo has taken measures to meet the special needs of the animals related to strain on their joints and feet that is exacerbated as they age.

In addition to special exercises, monitoring, diets and veterinary treatments tailored to each animal, the zoo replaced the elephant barn's concrete floor with a soft rubbery substrate in 2014.

Before Jewell died in 2013, the zoo had a special boot made for her when they noticed that she limped on her right front foot.

The zoo also has included an expansion of its elephant exhibit in its long-range master plan.

The zoo's current 36,000-square-foot enclosure meets the Association of Zoos and Aquariums' requirements of a minimum of 400 square feet per animal indoors and at least 1,800 square feet of yard space for one elephant with an another 900 square feet for each additional elephant.

"While available space is important to consider to an extent, the management program for the animals is even more vital to their well-being," Roocroft wrote in his report.

Sarah Kline has been the Little Rock Zoo's head veterinarian for three years. She knows the name of every animal at the zoo. Counting the insects, there are about 1,000 -- though not all of those have names.

"It's similar to a vet who has done the first puppy exam through the end of life. We know their favorite food and the best time to check on them. We know their temperament. We see them go through births and grief during deaths of fellow exhibit animals, but our job is to remain objective and do what's best for the animal," Kline said. "Our biggest focus with Sophie is giving her great quality of life."

Sophie felt much better last week after the scare over the previous weekend, when she wasn't eating and showed signs of cramping pain.

Warner and another zookeeper held out produce for the elephant Thursday morning. After placing a piece in her mouth, Sophie repeatedly held out her trunk for more.

As children ran by with loud voices, Sophie let out a squeak and flopped her ears. Warner laughed.

"She gets excited over them," Warner said, smiling and patting Sophie's trunk.