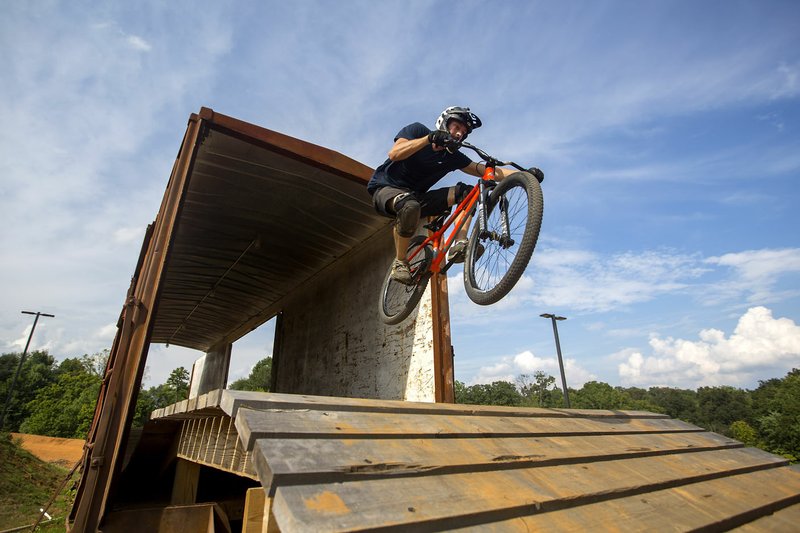 Josh Woodmancy of Rogers rides the course on Wednesday at the Railyard. The mountain bike course is approaching its one-year anniversary.

ROGERS -- Avid mountain biker Josh Woodmancy rolls to a stop just off one of the many Railyard Bike Park lines, drenched in sweat and grinning. He recognizes Andrea Brinton as one of the directors of the park.

"You were on the news when this park opened," he tells Brinton. I love it here, he says, sparing only a couple of minutes to chat before going back to the course he frequents.

The Railyard Bike Park has been open since Nov. 7. Its name pays homage to the history of Rogers, of which the A&M Railroad line plays a big part.

The mountain-biking park has a series of ramps, jumps, wall rides and concrete lips, and four tracks of varying difficulty for bike riders of all skill levels -- novice, beginner, intermediate and expert. Newly installed lighting allows riders to enjoy the park until 9 p.m. daily. A red light atop the signature A&M Railroad boxcar in the center of the park flashes a warning at 8:55 p.m.

On Nov. 11 it will be the site of the International Mountain Bicycling World Summit, the first major event hosted at the park, which likely will draw thousands of visitors. More than 1,000 people visit the park on a weekly basis as it is.

"We have one of the most progressive -- as far as skill levels go -- bike parks in the nation," Brinton said. Each line is designed to help the cyclist gain more technique. "Once you master the novice, you have a very high chance of being successful on that next level. You master that, and it's very, very simple to progress through your skills."

Brinton said the park was made for mountain-biking enthusiasts in great physical shape who are looking for a challenge and for beginning cyclists looking for a safe place to pedal.

Funding for the multiuse park came from the city of Rogers and the Walton Family Foundation, which together paid for the research that went into building it -- including a visit to Valmont Bike Park in Boulder, Colo. -- and also split the park costs approximately down the middle. Construction on the park began in fall 2014.

The visit to Valmont allowed Rogers engineers and construction workers to benefit from the experience of a long-running 42-acre bike park. The Railyard's soil mix, maintenance, equipment and irrigation plans were helped by the trip, Brinton said.

"Water has been the challenge" in its first year of operation, said Jim White, director of Rogers Parks and Recreation. "A half an inch can close us for a while, more than an hour."

The city continues to work on improving water drainage at the base of the jumps, Brinton said.

The dirt paths and mounds on the park's four lines were made from a carefully balanced mixture of clay, sand and dirt, not unlike a baseball diamond, but with Soiltac added to the mix. Soiltac is a compound that controls dust and erosion.

Initial construction meant trucking in several shipments of the soil mix. The use of the compound allows the city to wait 10 months to one year before restocking and mixing more.

One area of the park is sodded to manage runoff, which empties into Lake Atalanta and eventually Beaver Lake.

"When building it, environmental impact was a huge concern," White said.

David Hook, facilities development manger for Rogers, took a second city role as construction manager for the project. He and Brinton worked with civil engineers to ensure good planning.

Maintenance can be done by shutting down a single cycling line on a rotating basis rather than closing the entire park down for an extended time, Brinton said.

The park also has a natural playground made of tree stumps, tunnels and tree trunks; a fenced dog park, a covered picnic table area with restrooms and a drinking fountain. The grounds are connected to Pleasant Ridge and Lake Atalanta, which has 10 miles of off-road trails.

An area on the southeast side of the park remains undeveloped and will be used for future expansion.