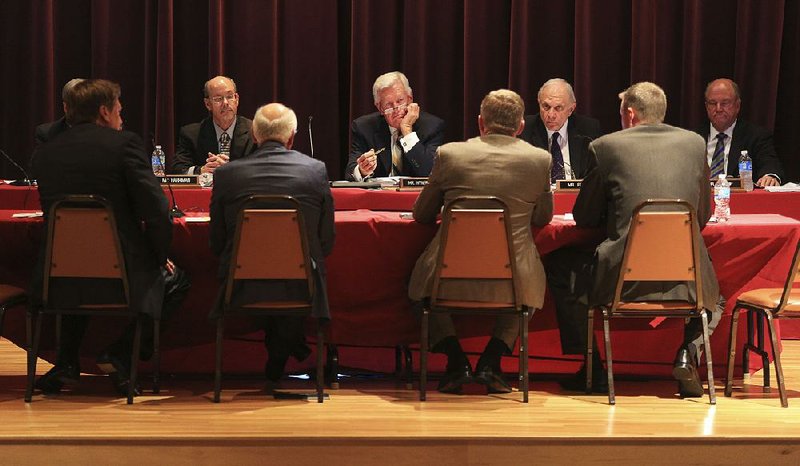 The University of Arkansas at Fayetteville is just a step away from getting the final seal of approval on the north end zone expansion and other upgrades at Donald W. Reynolds Razorback Stadium.

On Wednesday, a committee of University of Arkansas System trustees approved 5-1 a bond issue of up to $120 million to enclose the north end zone and make other updates, an estimated $160 million project that would, in part, expand crowd capacity from the current 72,000 to about 76,000.

Cliff Gibson of Monticello offered the sole no vote.

The full 10-member board of trustees will take up those matters today.

The renovations will encompass new premium seating, including about 300 seats in the new Founders Club suites on the east side of the stadium, outdoor loge boxes and club seats.

Trustee David Pryor, a former U.S. senator who has voiced concerns about the expansion, has said he would vote against it.

On Wednesday, Pryor questioned the language used in the bond-issue resolution, which states, "Whereas ... the Bonds will be specifically secured by a pledge of revenues derived from athletic gate receipts and any student athletic fees collected by UAF... ."

UA is the only public, four-year university in the state that does not charge a student fee for athletics.

The university has budgeted about $90.7 million in athletics-generated revenue and an additional $15 million in contributions for the current fiscal year, according to the Arkansas Department of Higher Education.

JoAnn Maxey, general counsel at the UA System, said that language was placed in the resolution because it's required under state laws. As she understood the resolution, she said, ticket sales would pay for the bond obligation.

Gibson asked, "If you're not going to get student fees, why don't you take that out of the paperwork?"

Every bond issue that UA has includes that language, said Tim O'Donnell, the university's vice chancellor for finance. It's "if" UA has a student fee, and not that the school will have one, he said.

Trustee John Goodson of Texarkana added that the board would have to vote on new fees at any of the system's schools.

Pryor then asked what the guarantees are for retiring the bond issue with the present income.

"The guarantees are all the revenues of Razorback athletics," Long said.

"What if we lose three or four games? People stop coming to the games?" asked Pryor, who is not on the committee but was at the meeting.

"Senator, we've lost three or four games in many seasons, and our fans have continued to come to the games," Long said. "And I think that Razorback fans have shown incredible support for our football program and our athletic program in general.

"We've had years when we were not successful, and we're selling these suites at this time coming off a series of years that were not really successful. We think our best days are ahead of us."

On Wednesday, Long said he's received signed commitments for suite sales of $27.3 million, with another $4.3 million in commitments coming up.

The Razorback Foundation also has committed $10 million, and Razorback athletics is set to use another $10 million from reserves, Long said.

UA wanted to raise $40 million of the total $160 million project, but Long said he was optimistic the university could raise more.

The school hasn't even started sales for the new loge boxes or club seats, he said.

Pryor, who was Arkansas' governor before he was a U.S. senator, said he was worried that with the Southeastern Conference Network, Razorback fans may be tempted to stay at home to watch games during bad seasons.

"I truly think that we're looking at sort of maxing out on a credit card here," he said. "I don't know what other revenues we could pledge if we're pledging all of these revenues, $120 million worth of revenues."

UA had an announced attendance of 421,688 for the six home games last year, making for an average attendance of about 70,281 per game.

The department is looking to take on the additional debt over 20 years and plans to retire its current debt during that period, he said.

"Paying off some of the current debt is going to free up additional revenues, if needed, to apply to paying off the debt that's being taken out for this project," he said.

For one three-year period, the department will have a maximum debt service of $14.5 million, but that will decrease to $9 million over the last nine years of the bond issue, he said.

The university will not know exactly how much annual debt payments are until the bonds are sold.

Long added that revenue from the SEC Network -- about $13 million -- could also be used to support the project, if needed.

"That would be a safety net that we don't talk about because we don't think we'll need it," he said. "We have the support of the gate receipts to do that."

The renovations also include a new game-day locker room and training room, along with the new suites, box seats, club seats and club areas, and new entrances.

The box seats would consist of a cluster of four to eight seats separated from others by a partition. The new seating area will connect the concourse to the east and west walkways, improving the stadium's safety and security systems, Long has said.

The university also will add elevators at the northeast and northwest corners, and a new video board at the south end of the stadium.

The project also calls for redoing the Broyles Athletic Center, which is at the north end zone and will extend out into the parking lot.

The expansion would be the first since 2001, when the university added about 21,000 seats for $110 million by enclosing the south end zone and adding some club seating.